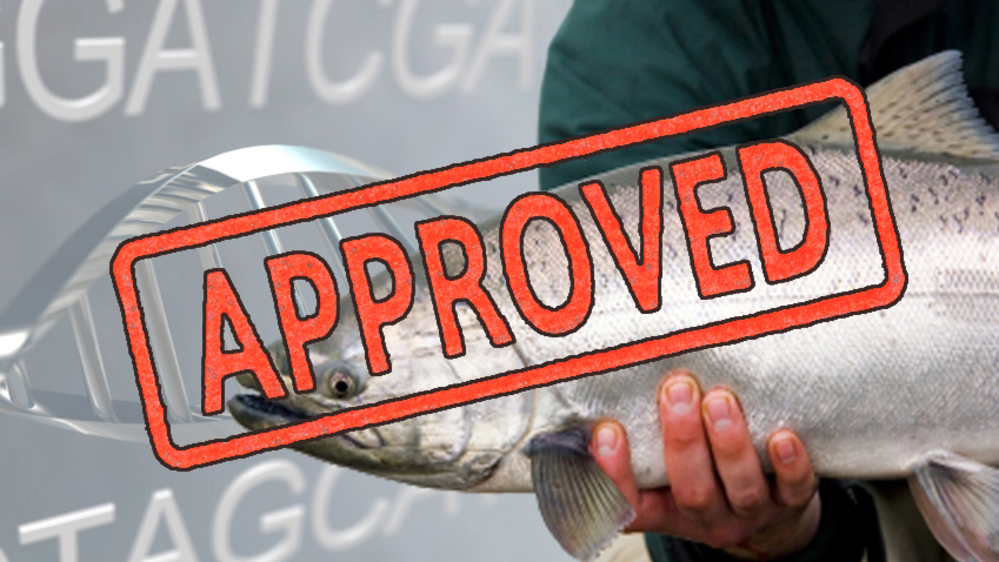 In November 2015, FDA approved the AquAdvantage® Salmon--the first GE animal intended for human consumption—produced by AquaBounty Technologies. The same company claims that it is also developing genetically engineered tilapia and trout for commercial approval, while others are developing other genetically engineered catfish and salmon. While corporations continue to engineer fish and push for their commercial use, scientific evidence mounts regarding the extraordinary environmental danger these fish pose. Additionally, the human health impacts of eating GE fish are entirely unknown.

Center for Food Safety is suing the Food and Drug Administration (FDA) to block the agency’s approval for sale.

AquAdvantage® Salmon are Atlantic salmon engineered to contain genes from an unrelated Pacific salmon and an Arctic eelpout.  These modifications cause the GE salmon to produce growth hormone year-round, allegedly creating a fish that grows at twice the normal rate of a typical Atlantic salmon.

At first, the company will be permitted by the FDA only to raise the GE salmon eggs in a facility on Prince Edward Island in Canada, and then ship those fish to be raise in a land-based facility in Panama.  There, the fish will be grown out and processed before being shipped for commercial sale.  The proposal puts both Canadian and Panamanian environments at risk; but beyond that, its feasibility is extremely questionable.  The way salmon are farmed commercially, escapes are regular occurrences.  Further, AquaBounty has publicly stated it intends to grow GE fish other places, once the regulatory door is cracked open.

To avoid transgenic pollution and maintain control over fish populations, AquaBounty states that it will only produce sterile females.  However, fish are known to change sex, particularly under stress, and there is no guaranteed method to produce 100% sterility.  According to data the company submitted to FDA, several research trials did not achieve complete sterilization: 6 out of 20 lots were found to have less than complete sterilization.[i]  The company will need to keep stocks of fertile fish to produce additional offspring.  At present, these fertile fish are being reared on Prince Edward Island, Canada in the middle of the historic range of the endangered Atlantic salmon and where there are 22 rivers containing Atlantic salmon.

While wild salmon have some human health benefits, the solution is not to “farm” genetically engineered versions to put more on supermarket shelves; the solution is to work to bring our wild salmon populations – and the ecosystems they depend upon – back.  The approval of these transgenic fish will only worsen the problems facing our marine environments.

The Center for Food Safety strongly opposes these genetically engineered salmon and is suing the agency to block this approval.  FDA must also mandate clear, mandatory labeling for AquAdvantage® GE Salmon to allow consumers to make informed purchasing decisions.

Tell Your Senators to Label Frankenfish