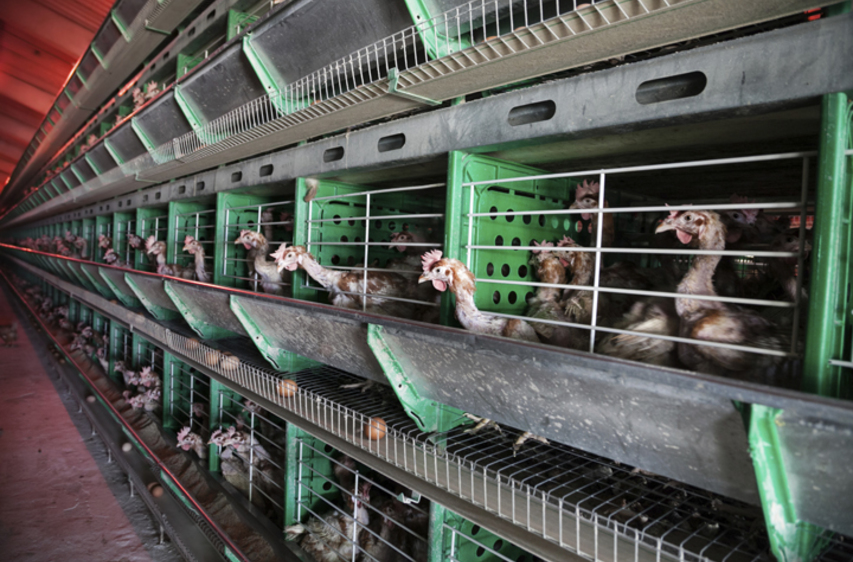 Animal welfare and food safety are intrinsically linked, which makes sense: sick animals produce sick food. The majority of meat produced in the United States comes from animal factories, the largest of which are called CAFOs, concentrated animal feeding operations. By some estimates, 99 percent of chickens, more than 90 percent of pigs, and 78 percent of beef cows in the U.S. are raised in animal factory operations.[i] Animal factories are incentivized to raise as many animals as possible, as quickly as possible, while keeping their costs as low as possible, in order to make the most profit. This system is characterized by overcrowded conditions, poor sanitation, inhumane animal treatment, forced rapid weight gain and compromised animal immune systems.

Confining animals indoor and packing them into dense living conditions creates a number of serious hazards for animal welfare.  Animals often live among their own waste and carcasses of their dead friends. Animals may be caged, chained, or tethered, unable to turn around or lie down. Poor ventilation causes buildup of toxic gases that threaten the animals’ health. This crowded, toxic environment is conducive to virulent strains of bacteria. The aggressive behaviors brought about by the high-stress environment often cause animals to severely injure one another, causing bruises, lesions, broken limbs, or even death. These are clearly not systems that protect the well-being of the animals. These harms outweigh any alleged benefit of increased production and are simply not a viable, humane, sustainable, or intelligent way to produce our nation’s meat and animal products.

Moreover, animal factories rely on the rampant use of animal drugs and feed additives to produce rapid rates of weight gain in the animals and to suppress the negative health effects that heavily-concentrated confinement has on farm animals. Not only does rapid weight gain stress the animals’ bodies and immune systems, but several of the approved drugs have terrible health impacts on the animals. Ractopamine, a beta-agonist drug, is known to cause muscular skeletal tremors, cardiovascular problems, increased aggression, increased risk of nerve paralysis, fractured vertebral columns, and increased risk of “downer” animals, a general term given to animals that cannot stand or walk on their own due to physical impairment. Another growth promoter, the steroid melengestrol acetate, is associated with higher risk of pneumonia and other diseases in cattle. The overuse of these drugs props up a system of animal factory farming that commits horrific animal welfare abuses and that would otherwise be untenable. Moreover, the overuse of animal drugs has resulted in the spread of drug-resistant bacteria and toxic runoff that further contaminates environmental resources and harms animal, human, and environmental health.

Animals in animal factories also often suffer inhumane treatment from their handlers. The high risk of injury from other animals’ aggressive behaviors (caused by their living conditions) means that many producers resort to painful physical alterations, such as cutting off tails, clipping teeth, or sawing off horns, to prevent injury rather than addressing the root causes of the violent behavior. Brutal treatment by handlers, such as beating, stabbing, kicking, or dragging, has also been well-documented at animal factories.