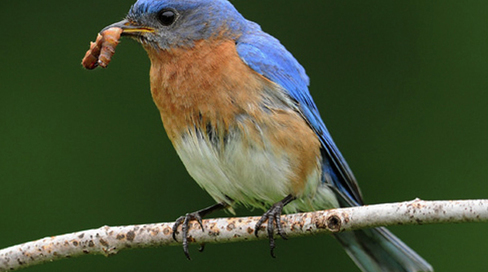 Conservation and food safety groups filed a lawsuit against the Environmental Protection Agency today for failing to protect endangered species from a new, toxic pesticide called cyantraniliprole. EPA risked far-reaching harm to both aquatic and terrestrial species by approving the widespread use of this new pesticide in January without input from the U.S. Fish and Wildlife and National Marine Fisheries services.

“The Endangered Species Act and just basic, common-sense requires EPA to seek input from our expert wildlife biologists before it blindly unleashes new pesticides across the American landscape,” said Brett Hartl, endangered species policy director at the Center for Biological Diversity. “EPA’s failure to look before it leaps has once again put imperiled wildlife across the country in harm’s way.”

EPA authorized widespread uses of the new pesticide in both agricultural and urban areas without measures to protect endangered species despite concluding in its own assessment that cyantraniliprole is “highly or very highly toxic” to scores of endangered species.  Based on these findings, the agency’s scientists recommended broad  measures to keep cyantraniliprole from reaching sensitive wildlife habitat.  While EPA concluded that it should consult federal wildlife biologists for more specific analysis and to develop on-the-ground protections for species, the agency failed to take that step.

“EPA’s unlawful and irresponsible approval ignored its own scientists’ warnings that strong protective measures are needed because this pesticide can drift into wildlife habitat,” said George Kimbrell, Senior Attorney for the Center for Food Safety. “The agency also failed to include measures to protect water quality from pesticide run-off despite the urging of local water management authorities.”

“EPA must stop putting pesticides it knows are harmful on the market without addressing harms to wildlife and agriculture,” said Jason Rylander, Senior Attorney at Defenders of Wildlife. “There’s no excuse for turning our endangered wildlife into a statistic when EPA already knows that reasonable protections are needed to curb the harm from this new chemical.”

The Endangered Species Act requires EPA to consult with federal wildlife biologists on the effects of chemicals applied within the habitat of at-risk wildlife. To help these federal agencies break through years of gridlock, a report issued last year by the National Academy of Sciences outlines a process for EPA to work together with the National Marine Fisheries Service and the U.S. Fish and Wildlife Service to ensure that pesticide regulation adequately protects imperiled wildlife.  In response to those recommendations, EPA announced several reforms last year designed to better protect endangered species. Yet EPA did not incorporate any of these reforms in its process for approving cyantraniliprole.

“EPA’s approval of cyantraniliprole without regard to its impacts on wildlife undermines recent collaborative efforts to reform EPA’s dangerous approach to assessing the risks pesticides pose to wildlife conservation,” said Steve Mashuda, an attorney at Earthjustice. “EPA can’t just pick and choose which chemicals it will evaluate.”

The lawsuit asks the federal district court in Washington, D.C. to order EPA to consult with federal wildlife biologists on cyantraniliprole’s effects on endangered species and to put in place interim protections necessary to protect wildlife until the consultation is complete.  Earthjustice is representing and co-counseling the case with the Center for Biological Diversity, the Center for Food Safety, and Defenders of Wildlife.

The Center for Food Safety is a nonprofit, public interest organization with half a million members nationwide. CFS and its members are dedicated to protecting public health and the environment by curbing the use of harmful food production technologies and instead promoting sustainable alternatives.

Defenders of Wildlife is a nonprofit environmental organization with nearly one million total members and supporters. Defenders is dedicated to the protection of native wild animals and plants in their natural communities and advocates for new approaches to wildlife conservation that will help keep species from becoming endangered.

Earthjusticeis a non-profit public interest law firm dedicated to protecting the magnificent places, natural resources, and wildlife of this earth, and to defending the right of all people to a healthy environment.