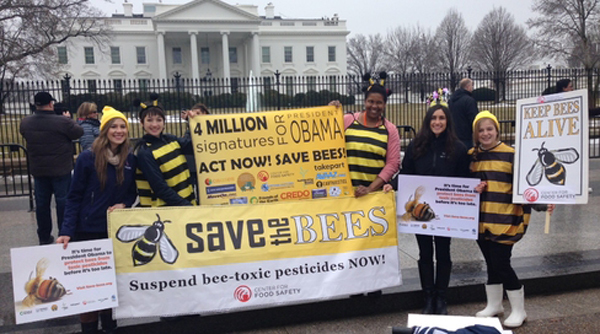 Bees and other pollinators are dying at an alarming rate and it is a direct threat to our environment, our agricultural economy, and our nation’s food security. Beekeepers across America lost 44 percent of their honey bee colonies from April 2015 to April 2016, and many beekeepers continue to report above average summer and winter losses, with some as high as 100%. Multiple factors have been identified as causes for these severe declines (including disease, parasites, poor nutrition, and habitat loss), but extensive scientific research has shown that a leading factor for the continued losses in pollinator populations is the indiscriminate use of pesticides, particularly neonicotinoids and other systemic insecticides.

Neonicotinoids (“neonics” for short) are the most commonly used insecticides in the world. Defined by their systemic nature (meaning that they can be applied and are then absorbed throughout the entire vascular system of the plant), they work by interfering with the central nervous system of invertebrates causing a variety of effects including, but not limited to: confusion, paralysis, and eventual death.

New research by both private institutions and government agencies has both exposed the associated risks and questioned the effectiveness of these bee-toxic chemicals. As the evidence that neonics cause more harm than good continues to mount, policy makers worldwide are starting to take action.

In 1994, the Environmental Protection Agency (EPA) approved the first neonicotinoid chemical, imidacloprid, for limited use on ornamental plants and turfgrass. In the 2000s, EPA began approving more neonics, like thiamethoxam (2000), acetamiprid (2002), clothianidin and thiacloprid (2003), and dinotefuran (2004). The approval of these new pesticides was controversial. In scientific assessments and early reviews dating back to 1993, EPA scientists had serious concerns with the high toxicity of these chemicals to honey bees, birds, and other wildlife, as well as to endangered species. Yet EPA’s decision makers overruled the scientists and downplayed their warnings.

Despite increasing declines in pollinator species starting in 2006, the U.S. government did not take actions to reduce or eliminate threats to honey bees and other pollinators from uses of these highly toxic insecticides. Meanwhile, the international community was more proactive—with numerous countries imposing suspensions and restrictions on uses of neonics. In January 2014, the European Union enacted a 2 year moratorium on certain uses of these chemicals, after independent scientists and the European Food Safety Authority expressed serious concerns about the unacceptable hazards that neonics pose to bees.

Today, rather than following the lead of the EU and other countries in taking swift action to protect pollinators from the harms of these chemicals, the EPA is reportedly working with pesticide and agricultural equipment manufacturers to implement best management practices (BMPs), labeling changes, and newer planting equipment. Updating product labels for pesticides containing neonicotinoids is inadequate to prevent excessive damage to non-target species, and BMPs are not enforceable and therefore not effective in significantly reducing contamination from these chemicals.

EPA is currently working on reviewing the registrations of certain neonicotinoids, which are not set to conclude until 2018-2019. In January 2016, EPA released a preliminary honeybee risk assessment for the leading neonicotinoid pesticide, imidacloprid. Although the EPA confirmed the years of research showing the harmful impacts of continued exposure to neonicotinoid residues on honeybee populations, the assessment did not address the risks associated with water and soil exposure and the risks to wild bee populations. Despite the assessments’ shortcomings, the documented threat to Honeybees is enough for EPA to suspend the use of imidacloprid and other similar systemic insecticides. Pollinators and other critical species cannot wait several more years for these reviews to be completed—strong action was needed years ago.

In June 2014, President Obama released a presidential memorandum calling for the establishment of a Pollinator Heath Task Force after identifying pollinator declines as a threat to the sustainability of our food production systems, our agricultural economy, and the health of the environment. Almost a year after the announcement, in April 2015, the EPA announced a moratorium on any new neonicotinoid products or uses. While seemingly a good move, the action has no effect on the over 500 products already registered for use in the United States and does not address new systemic insecticides, essentially cousin chemicals to neonics, entering the market.

In May 2015 the Federal Task Force released its strategy that contained positive far reaching goals—including reducing honey bee colony losses during winter to no more than 15 percent within 10 years; increasing the monarch butterfly population to 225 million butterflies in the overwintering grounds in Mexico by 2020; and restoring or enhancing 7 million acres of land for pollinators over the next 5 years. However, although moving in the right direction, the plan ignores the plight of wild bee populations and the solutions outlined for reaching the proposed goals focus primarily on building more pollinator habitat and do not address the need for stricter regulation of bee-toxic chemical pesticides. Overall, the plan fails to recognize or in any way follow the concrete steps taken in the European Union or elsewhere to sharply reduce the risks to pollinators posed by agricultural chemicals. It is a slow, reactive plan instead of the proactive plan the pollinator crisis now demands.

Center For Food Safety Fighting For Bees In Court

In March 2013, Center for Food Safety (CFS), joined by bee keepers and other environmental organizations, filed a lawsuit against the EPA for its failure to protect pollinators from two neonicotinoid chemicals—clothianidin and thiamethoxam. The coalition, represented by CFS attorneys, seeks a suspension of the registrations of these neonicotinoids and challenges EPA’s conditional registration of these pesticides along with their labeling deficiencies. The lawsuit was filed one year after CFS, along with 25 commercial beekeepers and other environmental groups, filed an emergency petition with the EPA to suspend the use of clothianidin, a request that EPA denied.

In March 2014, CFS along with other environmental organizations, again filed a lawsuit against the EPA for failing to protect hundreds of endangered fish, butterflies, and other species from a new systemic pesticide, similar to neonicotinoids, called cyantraniliprole. The lawsuit notes the EPA’s routine disregard of the Endangered Species Act’s requirement to consult with federal wildlife agencies on how to implement conservation measures to protect threatened and endangered species from pesticides.

In January 2016, CFS, on behalf of several beekeepers, farmers and sustainable agriculture and conservation groups, filed a lawsuit challenging the EPA’s inadequate regulation of the neonicotinoid insecticide seed coatings used on dozens of crops. EPA does not currently regulate the largest single use of neonicotinoids—coatings on seeds for dozens of major crops across the country. This means that these chemicals are applied without adequate safety testing, proper data gathering, or necessary product labeling. EPA has allowed millions of pounds of coated seeds to be planted annually on more than 150 million acres nationwide. The lawsuit alleges the agency has illegally allowed this to occur, without requiring the coated seeds to be registered under the Federal Insecticide, Fungicide, and Rodenticide Act (FIFRA), without enforceable labels on the seed bags, and without adequate assessments of the serious ongoing environmental harm.

Despite many failures by the government to protect critical pollinator species, there are some victories at the Federal and local level. In response to a petition from the Center for Food Safety and other organizations, in July 2014, the US Fish and Wildlife Service announced plans to ban neonicotinoid pesticides from use within national wildlife refuges across the country by January 2016. This is similar to other local actions taken to restrict the use of neonicotinoid pesticides, such as: Portland, Cannon Beach, and Eugene, OR; Thurston County, Spokane, and Seattle, WA; Skagway, AK; Shorewood, Lake Elmo, South St. Paul, Stillwater, Minneapolis, Andover, Mendota Heights, Maplewood, and St Louis Park, MN; Sacramento and El Cerrito, CA; Ogunquit, ME; Boulder, CO; and Montgomery County, MD.