Half a Million Demand Action from EPA to Save Bees 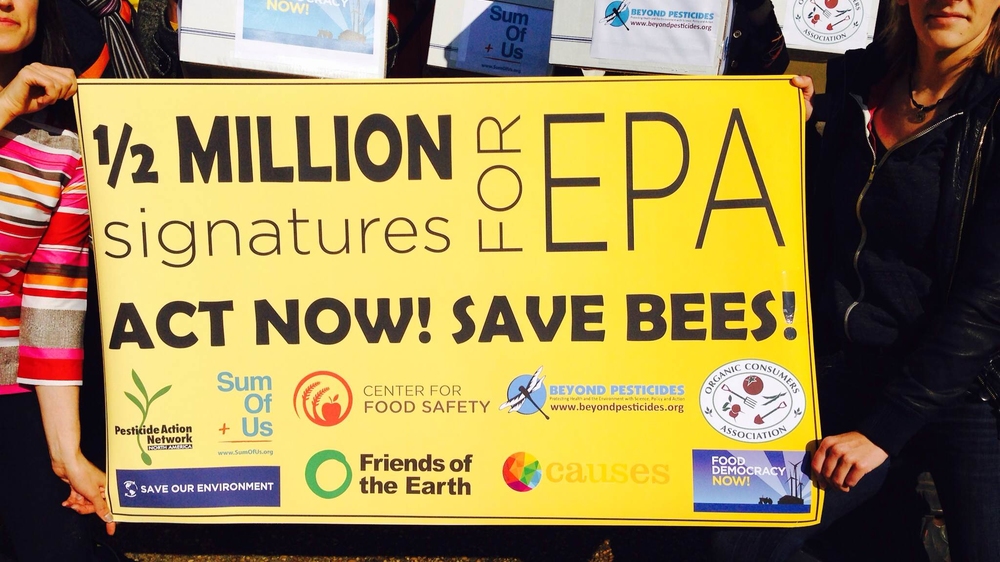 Over 500,000 signatures delivered to Administrator McCarthy one year after groundbreaking lawsuit brought by beekeepers

Today, more than half a million signatures were delivered to Environmental Protection Agency (EPA) Administrator Gina McCarthy, urging the nation’s top-ranking environmental leader to protect bees and other pollinators.  The date marks the one-year anniversary of the lawsuit filed against EPA by beekeepers, food and environmental groups over the continued allowance of two bee-toxic pesticides. It also marks the two-year anniversary of the legal petition filed against the agency on this same issue. EPA has yet to take serious action to address dramatic bee declines.

The pesticides in question are a class of systemic insecticides known as neonicotinoids. Despite numerous studies linking neonicotinoids with bee kills, colony collapse, and weakened immune systems, EPA continues to operate under an alarmingly slow registration review process that extends to 2018.  Honey bees are responsible for producing one in every three bites of food we eat, but research increasingly shows they are being harmed by the indiscriminate use of neonicotinoids, both alone and in combination with other pesticides.  It is the job of the EPA to review such pesticides for safety and to take action if they are found to be harmful.

“We call on EPA Administrator McCarthy to lead the agency in a new direction by immediately suspending all outdoor uses of neonicotinoid pesticides. Bees can’t wait four more years for EPA to make a decision. If the agency acts now, we can save these vital pollinators before it’s too late,” said the groups in a joint statement.

“Beekeepers are losing colonies at an unprecedented rate – the losses are too extreme to keep up with, and our entire industry is at risk of collapse unless federal action is taken.  Convening conferences and changing pesticide labels is lip service and window dressing to the issue, but has no substance,” said New York beekeeper Jim Doan, a plaintiff in the lawsuit who will be discussing bee declines on Capitol Hill next week.

In the absence of federal action, several states have taken action independently to introduce legislation that would suspend uses of neonicotinoids.  California, Minnesota and New York are among the states considering action in their state legislatures. And this month, Eugene, Oregon became the first city in the country to take action and ban the use of neonicotinoids on city property. Congress is also pushing to curb the use of neonicotinoids through the Saving America’s Pollinators Act, introduced by Representatives John Conyers (D-MI) and Earl Blumenauer (D-OR).

In December, Europe implemented a two-year moratorium on the most problematic neonicotinoids in order to protect bee health. Several European countries have had bans for years, with no economic costs to farmers or consumers.

“We are asking EPA to follow the EU’s lead and recognize that the risks are unacceptably high. Pollination services provided by honey bees and other, even less studied, wild bees are far too important for agriculture and ecosystems to treat them in a non-precautionary manner. Many thousands of beekeeper livelihoods, the future viability of commercial beekeeping and the crops relying on these pollination services, estimated at $20-30 billion annually, are potentially in jeopardy,” said the groups.

A coalition of groups joined forces to support the effort, including Avaaz, Beyond Pesticides, Causes, Center for Food Safety, Food Democracy Now!, Friends of the Earth US, Organic Consumers Association, Pesticide Action Network North America, Save Our Environment, and SumOfUs.