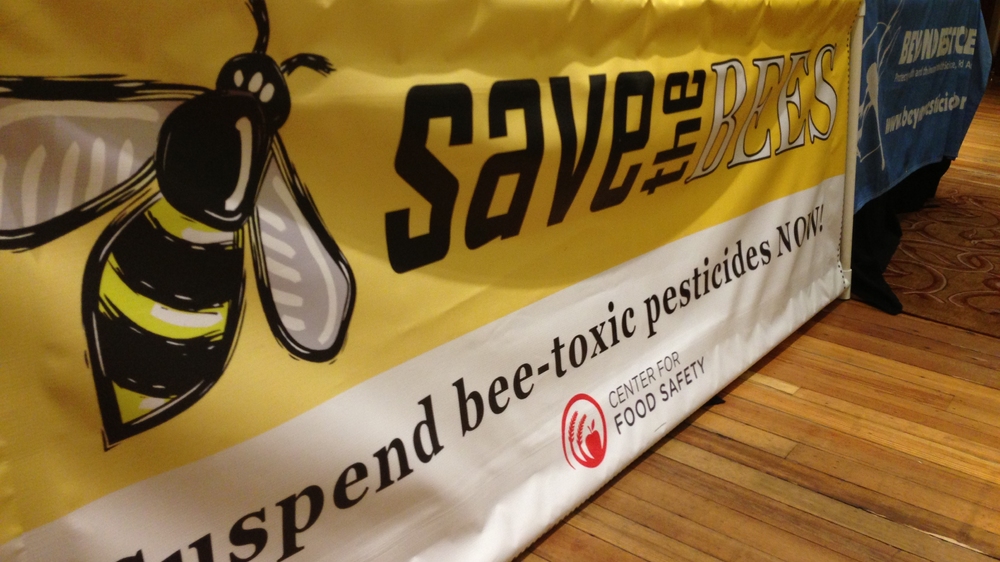 Today, on Valentine’s Day, Pesticide Action Network, Center for Food Safety, and Beyond Pesticides, represented by Earthjustice, submitted detailed comments to state officials urging them to stop approving pesticides linked to bee declines. The California Department of Pesticide Regulation has continued to approve new bee-harming products before completing an evaluation of their impacts. In their letter, the groups underscored these larger problems with the agency’s inability to complete evaluations of pesticides after five years.

A growing body of independent science links a class of pesticides called neonicotinoids (“neonics”) to bee declines, both alone and in combination with other factors like disease and malnutrition. Oregon officials determined the neonic dinotefuran was the cause of two massive bee kills in the state last year. In the letter submitted on Friday, groups called on the California Department of Pesticide Regulation (“DPR”) not to allow greater use of this pesticide.

"We know these chemicals have been responsible for massive bee deaths - dinotefuran was the neonicotinoid responsible for the largest ever bumblebee kill last summer. Why should we allow these catastrophic losses to continue by registering more uses and approving new systemic pesticides. It defies logic and the law," said Larissa Walker, policy and campaign coordinator for Center for Food Safety.

In addition, the groups also urged DPR not to register a product containing a new ingredient called cyantraniprole. Several of the groups filed comments with the federal government to not approve the use of this pesticide last year. But federal officials just announced its approval, opening the door for California use.

“California officials are rushing to approve yet another systemic bee-harming pesticide before they fully understand the range of impacts,” said Jay Feldman, executive director of Beyond Pesticides and one of the groups that also filed federal comments.

The groups also urged DPR to conclude its review of the neonicotinoid pesticides as a class. The review, which began in 2009, has no clear end in sight. And the agency has continued to approve new bee-harming products and uses before completing its evaluation.

“DPR has been saying for five years that neonicotinoid pesticides may be killing California’s honey bees, and yet the agency allows more and more of these pesticides to be used each year,” said Greg Loarie, an attorney at Earthjustice.  “It’s past time for DPR to fix its broken evaluation system and protect our bees and our agricultural economy.”

One in every three bites of food depends on bees for pollination, and the annual value of pollination services worldwide are estimated at over $125 billion. In the United States, pollination contributes $20-30 billion in agricultural production annually. And in California alone, almonds are an over $3 billion industry.

"Bees, beekeepers and the food system can't afford to wait forever," said Jeff Anderson, a beekeeper and owner of California-Minnesota Honey Farms. "California officials must act quickly and decisively to protect bees and the crops they pollinate."

In December, the European Union began a two-year moratorium on three of the most widely used neonicotinoids. Yet, the U.S. EPA, working in coordination with Canadian and California officials, has refused to take any action until at least 2018.

Across the country this week, food, farming and beekeeper groups frustrated with the lack of state and federal action coordinated efforts to “Show Bees Some Love.” Groups, including Friends of the Earth, delivered thousands of Valentines to one home and garden store in the Bay Area urging them to stop selling plants treated with neonicotinoids. And the Los Angeles City Council took steps to legalize urban beekeeping.

Beyond Pesticides, founded in 1981, works with allies in protecting public health and the environment by identifying the hazards of chemical-intensive land, building and community management practices and promoting healthy, sustainable and organic systems. More information can be found at beyondpesticides.org.

Center for Food Safety is a national, non-profit, membership organization founded in 1997 to protect human health and the environment by curbing the use of harmful food production technologies and by promoting organic and other forms of sustainable agriculture. CFS maintains offices in Washington, D.C., San Francisco, California and Portland, Oregon. More information can be found at centerforfoodsafety.org.

Earthjustice is a non-profit public interest law organization dedicated to protecting the magnificent places, natural resources, and wildlife of this earth, and to defending the right of all people to a healthy environment.
Earthjustice.org

Pesticide Action Network (PAN) North America works to replace hazardous pesticide use with ecologically sound and socially just alternatives. As one of five PAN Regional Centers worldwide, we link local and international consumer, labor, health, environment and agriculture groups into an international citizens' action network. This network challenges the global proliferation of pesticides, defends basic rights to health and environmental quality, and works to insure the transition to a just and viable society. More information can be found at panna.org.