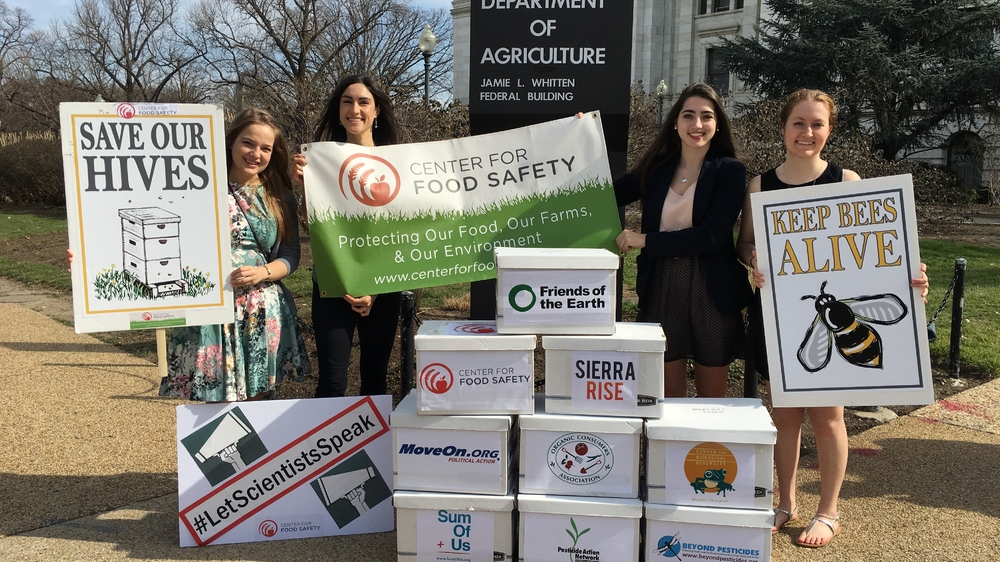 Today, Center for Food Safety and allied organizations delivered signatures from more than 140,000 people calling on the U.S. Department of Agriculture (USDA) to stop silencing its own scientists and censoring their research findings on bee-toxic pesticides. Research about these pesticides (a class of commonly used insecticides called neonicotinoids, or “neonics” for short), which are a key factor in global bee declines, has been demonstrably suppressed when the research isn’t aligned with the pesticide industry.

Over the past year, there has been quite a bit of coverage about allegations that USDA is suppressing its scientists – most recently with a major feature story in The Washington Post Magazine. If you haven’t been keeping up with the developments – here’s a quick recap:

Last year, Dr. Jonathan Lundgren, a senior scientist at the USDA's Agricultural Research Service, filed a whistleblower complaint accusing the agency of suppressing research findings that challenge the safety and efficacy of neonics. (Important side note: in March 2014, Dr. Lundgren served as an External Reviewer for CFS's report Heavy Costs, which focused on the lack of yield benefits from neonic-coated seeds).

As Dr. Lundgren described in his complaint, "Within one week of these late-March press interviews and the release of the CFS study, improper reprisal, interference and hindrance of my research and career began in earnest.”

One year later, in March 2015, the Public Employees for Environmental Responsibility (PEER) filed a formal petition with USDA, calling on the agency to strengthen its Scientific Integrity Policy. The petition was filed after PEER received numerous reports that USDA researchers were ordered to “retract studies, water down findings, remove their name from authorship and endure long indefinite delays in approving publication of papers that may be controversial.” The USDA dismissed that petition several months later, leading PEER to file a lawsuit against USDA in November 2015 to end scientific censorship.

While Dr. Lundgren is the first to file a formal complaint about the scientific integrity of research by USDA scientists, he is unfortunately not the first USDA scientist to be targeted for his “sensitive” research. PEER has reported that more than ten USDA scientists have faced consequences or investigations when their work called into question the health and safety of agricultural chemicals. These scientists documented clear actions that violated their scientific integrity, including USDA officials retracting studies, watering down findings, removing scientists’ names from the authorship of papers, and delaying approvals for publication of research papers. One senior USDA scientist, who asked not to be named, recalled to a Reuters reporter, "Your words are changed, your papers are censored or edited or you are not allowed to submit them at all.”

These reports by PEER and Reuters are extremely troubling. The USDA has a responsibility to protect the health and safety of the American public and to ensure the long"term viability and sustainability of the environment and our natural resources. Americans ought to be able to trust that their government and its employees are serving their constituents and not the profits of private chemical companies.

Bees, butterflies, birds, and other critical pollinators are in great peril and populations are dwindling worldwide. As you’ve likely noticed, a growing body of scientific evidence has implicated neonicotinoids as a key factor in bee declines and poor pollinator health.

Intimidation and harassment of USDA ARS scientists doing critical research on these toxic pesticides should not be tolerated. That’s why today we demanded that USDA stop censoring its scientists’ research. How can the USDA (as the co"chair President Obama’s Pollinator Health Task Force) truly create a meaningful federal strategy that will effectively protect bees, birds, monarchs, and other critical pollinators if the agency is censoring and suppressing its own scientists who are raising concerns about these dangerous pesticides? It’s time to put an end to this censorship.