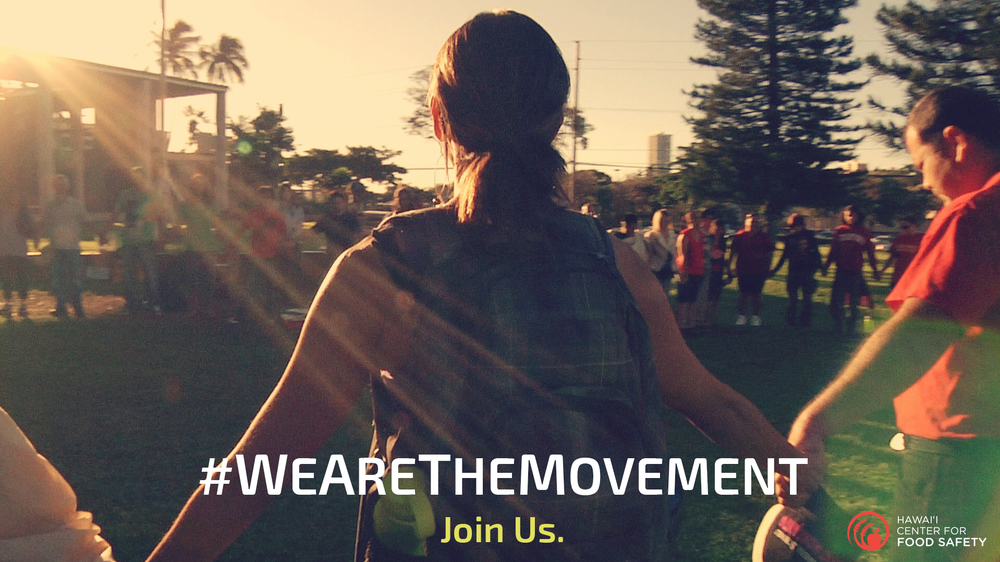 March 31, 2015 (Honolulu, HI)—As a bill intended to protect residents from harmful pesticides died in the Hawai‘i state legislature this past week, Hawai‘i Center for Food Safety today called for resilience and praised activists for their achievements as SB 1037, the last of seven pesticide focused measures, died in the House. SB 1037 crossed over from the Senate on March 10, but Rep. Clift Tsuji, chair of House Committee on Agriculture failed to schedule the bill for a hearing before the deadline last week. The House Committee on Agriculture is the same committee that deferred and effectively killed a similar bill, HB 1514, earlier this session.

“We, as a community of concerned citizens and organizations came to the legislature this year with one singular message. Doing nothing about pesticide exposure was no longer acceptable, and yet here we are again: a community concerned about pesticide drift left with nothing,” said Ashley Lukens, director of Hawai‘i Center for Food Safety. “It is a shame that agrochemical companies have such a stranglehold on our policy process.”

The community members most impacted by pesticide drift were similarly frustrated.

“How can a child be successful in school and in life if their health is compromised by the environment they live in? While we have laws that value children’s education, Hawai‘i lacks laws that value children’s health,” said Mercy Ritte, a mom from Molokai. “I am disappointed in our representatives who dismissed the buffer zone and pesticide disclosure bills that could have laid a path toward protecting our children from the harms of pesticides.”

Despite the setback, the collation called the campaign a huge success, as the unprecedented media coverage and civic engagement served to clarify the community’s concerns around the GE Seed industry. Hawai‘i Center for Food Safety is committed to continuing  its work until appropriate regulations are in place to protect Hawai‘i’s keiki.

Additionally, the coalition launched www.protectourkeiki.org, featuring a wealth of resources, updates and an advocacy toolkit for taking action. Future work on this issue can be found there.

Children can be exposed to pesticides applied on school grounds, pesticides that drift onto school grounds, or pesticide residues. Of greatest concern are restricted use pesticides, which scientists have definitively linked to developmental delays in children, and other toxic exposure to pesticides during fetal, neonatal, and infant life that may disrupt critical development processes. Life-long pesticide exposure for those living in exposed areas has been linked to long-term health effects, including cancer and other serious diseases, decreased cognitive function, and behavioral problems.