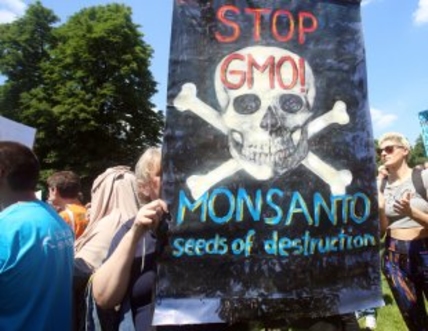 With the help of the federal government, Monsanto is set to make things worse.

Last year's farm season was the first year Monsanto’s newly approved XtendiMax pesticide was used. Crop damage was so bad that multiple states had to step in and take action to protect their farmers. Why? Because, as revealed below, U.S. agriculture has rarely if ever seen such a dramatic and disastrous season as 2017, the result of our government regulators failing to protect farmers and the environment—instead doing the bidding of chemical companies.

Monsanto's "new" pesticide is actually just an old pesticide with a new twist: dicamba, a pesticide more than 50 years old, intended for use on Monsanto's new genetically engineered dicamba-resistant corn and soybeans. Dicamba has been sold in various forms since 1967 and used primarily with cereal crops like corn and wheat, which can tolerate small doses of it. However, its notorious propensity to drift made it unpopular with most farmers, who switched to safer herbicides as they became available. Because dicamba is extremely toxic to traditional cotton and soybean, the pesticide previously could be used only before these plants sprouted, to clear a field of weeds early in the season, and few used it for that purpose.

Monsanto's genetically engineered varieties changed all that, allowing XtendiMax to be sprayed "over-the-top" of the dicamba-resistant crops, much later in the season. This is also when neighboring crops have leafed out and are susceptible to crop injury—and when higher temperatures increase vapor drift. Now, the agribusiness giant can conveniently market patented GE dicamba-resistant seeds (which are also resistant to Roundup herbicide) together with XtendiMax, as the "Roundup Ready Xtend Crop System."

Doubling down on the pesticide treadmill

This crop system is Monsanto's false solution to a problem of its own making. For 20 years, the company has sold Roundup and seeds genetically engineered to resist Roundup's active ingredient, glyphosate. This "Roundup Ready" crop system has dramatically and controversially increased the overall pesticide output into our environment, making Roundup the most used pesticide in the history of mankind, contaminating our watersheds, soils and harming biodiversity. However, it also caused a related agronomic problem: Monsanto told farmers they could rely entirely on Roundup without weeds becoming resistant to glyphosate, contrary to weed science experts' warnings. But as with overusing antibiotics, Roundup overuse generated an epidemic of glyphosate-resistant "superweeds" infesting an estimated 100 million acres of U.S. cropland.

So now, Monsanto's new business model consists of GE soybean and cotton to resist both dicamba and Roundup so they can both to be sprayed freely without killing the crops. Although Monsanto presents the ability to kill glyphosate-resistant weeds with dicamba as a quick fix to the glyphosate-resistant weed epidemic, it will actually make things worse. The massively increased dicamba use spurred by Monsanto's crops—nearly a 100-fold increase on soybeans alone—will foster rapid evolution of still more intractable superweeds, now resistant to both pesticides. There are already initial signs of dicamba resistance arising in farmers' most feared weed, Palmer amaranth, in Arkansas and Tennessee.

Just as critics had warned, dicamba sprayed on Monsanto's GE soybeans and cotton volatilized, forming vapor clouds that drifted to damage a host of crops and wild plants. By July, farmers officially reported dicamba drift damaged 2.5 million acres of soybeans alone, rising to over 3.5 million acres in 16 states by August. Many other crops were also damaged, including tomatoes, melons, fruit and nut trees, and vegetables. Because experts estimate only one in ten dicamba drift episodes were reported, the true impacts could be ten times greater. Dicamba also injured residential gardens, shrubs and trees. Flowering wild plants near cropland also suffered, with potential harms to pollinators robbed of nectar and pollen resources, as well as hundreds of endangered species. Agronomists reported the scale of damage was "uncharted territory," and they had never seen herbicide-related drift damage on anything approaching this scale before.

Dicamba drift threatens farmers' livelihoods, by slowing soybean growth and reducing yields, costing them millions. Dicamba has drifted so rampantly that many farmers feel compelled to plant Monsanto’s seeds, which are considerably more expensive than others, to avoid crop injury—which many feel is a form of extortion. Farmers have banded together to file class action lawsuits against Monsanto, in an attempt to recoup their losses. Dicamba drift has torn apart rural communities, pitting farmer against farmer. One dicamba drift dispute resulted in the gunshot death of an Arkansas grower.

The U.S. government was well aware of dicamba's dangers to the environment and farmers, but Monsanto pressured the EPA to approve its business' future cash cow anyway. EPA relied on Monsanto's assurances that XtendiMax was significantly less volatile than other dicamba formulations, and ignored warnings and documented analysis from farmers, scientists, and groups like Center for Food Safety that approval would lead to precisely the devastating crop injury that in fact occurred during the 2017 crop season.

While the tragedy unfolded over the summer, university scientists were finally allowed to test XtendiMax’s drift properties themselves, something Monsanto had strictly prohibited until it gained EPA approval at the end of 2016. These scientists confirmed through independent research that volatility, or vapor drift, was in fact one of the major routes of the dicamba drift injury, despite Monsanto's disingenuous claims to the contrary. For months, they repeatedly shared this data with EPA. They showed that, for example, contrary to Monsanto’s claims, XtendiMax volatilized "for as many as 3 or 4 days following the application," and urged the agency to address the problem. Numerous state agricultural departments reported to EPA ongoing extensive damage. A dozen scientists expressed unanimous concern that XtendiMax and other new dicamba formulations were more volatile than manufacturers admitted.

Beyond vapor drift, which EPA did not address, farmers also found the byzantine usage restrictions (that EPA was forced to apply in a vain attempt to suppress dicamba drift) extremely difficult to follow in real-world farming conditions. These restrictions include a ban on spraying in still or in windy conditions, or when rain is forecast in the next 24 hours. According to weed scientists, the 16,000-word label instructions were "unlike anything that’s ever been seen before." A Missouri farmer said, "You have to be a meteorologist to get it exactly right."

In August 2017, EPA briefly considered state experts' recommendations to prohibit dicamba applications after a spring to early summer "cutoff date" as the only sure means to mitigate vapor drift damage. But after Monsanto opposed it, EPA rejected this solution. Instead, when EPA finally took action to amend the label in October, the agency followed Monsanto’s lead. EPA made XtendiMax restricted use, imposed record-keeping requirements and more applicator training, and a dusk to dawn spray ban. However, EPA left the critical issue of vapor drift unaddressed. In contrast, four states understood the centrality of vapor drift to crop damage and instituted cut-off dates and temperature limits to mitigate it.

EPA did not provide any new rationale or analysis or data to suggest that the new amended label would do any more to protect farmers’ crops from dicamba drift damage than the original label. Worse, EPA admitted that it had done no new assessment, nor gathered any new data at all as to why the new label amendments would reduce dicamba drift damage in the 2018 crop seasons. Instead, EPA continued to rely unlawfully on its prior analyses and determinations, even though they were proven tragically flawed. Millions of acres of damaged crops, with tremendous costs to farmers, are the predictable result of EPA recklessly pushing to market a product well known to drift on to neighboring plants and damage them. All of this could have been avoided if EPA had followed the law.

The government's decision to approve Monsanto's dicamba pesticide was not just irresponsible, it was unlawful. Farmers should be protected from this unprecedented damage, not made scapegoats in order for Monsanto to fatten its bottom line at their expense and the environment’s expense. That’s why a coalition of environmental and farmer nonprofits filed suit challenging the XtendiMax approval early last year, and this past Friday the challengers made their case, based on all of the evidence described above and produced in the litigation.

The government violated the federal pesticide law and the Endangered Species Act in approving XtendiMax without addressing volatility, failing to consider the significant costs of drift damage to U.S. farmers, failing to protect endangered species, and more. Should the farmers and environmentalists prevail, XtendiMax’s approval can be rescinded and the pesticide withdrawn from the market.

This article was made possible by the readers and supporters of AlterNet.