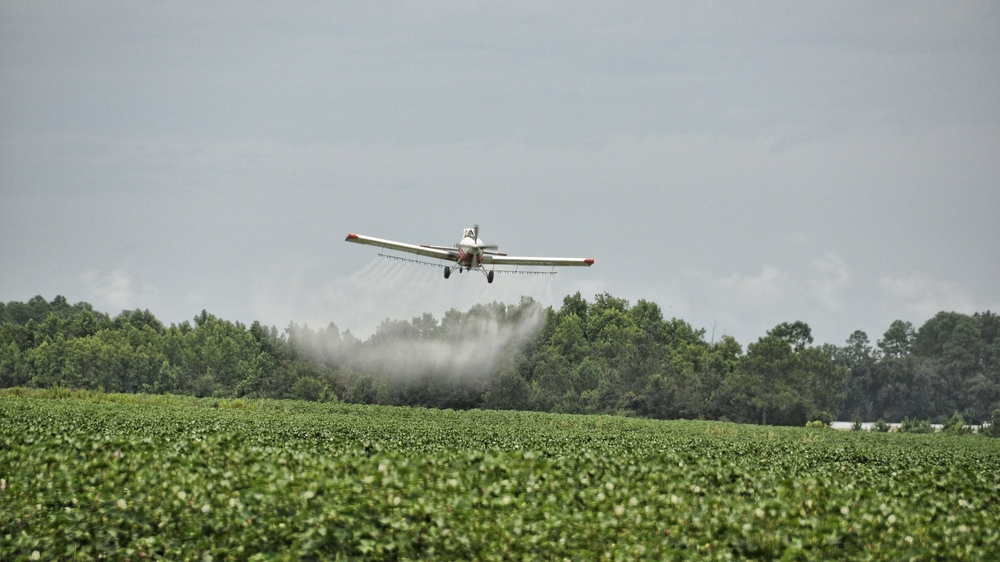 Monsanto's GE cotton and soybeans were made to be resistant to an herbicide that drifts to nearby crops.

Bill Bader is Missouri’s largest peach grower, supplying produce to retailers throughout the mid-South. But the last two years have found him struggling to save his farm. Thousands of his trees have defoliated limbs and walnut-size peaches not worth the picking, with 30,000 trees irreparably damaged.

Bader is not alone. Over 2,200 other farmers growing soybeans, tomatoes, melons, grapes and other crops across 20 states have reported crop damage on more than three million acres, slashing harvests by a third or more. Losses are estimated in the hundreds of millions of dollars.

What’s responsible for this devastation? The agricultural community points to Monsanto’s introduction of cotton and soybeans genetically engineered to withstand dicamba, an old herbicide long notorious for its propensity to drift and damage nearby crops. These new GMOs have led to dramatically increased dicamba use and associated crop damage.

Many farmers have embraced dicamba-resistant soybeans and cotton because they see no alternative for controlling yield-robbing weeds that have evolved resistance to glyphosate (i.e. Roundup) and other herbicides. These resistant weeds infest over 60 million acres of U.S. cropland thanks to massive use of glyphosate on Monsanto’s Roundup Ready GMOs, which are genetically engineered to survive direct application of the herbicide.

Dicamba devastation should come as no surprise. Farmers and agronomists warned precisely of this outcome years ago. My organization and others urged USDA and EPA to deny approval of Monsanto’s GMOs and the use of dicamba on them. Instead, the government listened to Monsanto and BASF, which claimed that their new “low-volatility” dicamba formulations were unlikely to cause drift injury.

These assurances have been proven false, as dicamba drift injury complaints continue to flood in even with label-compliant use of the newer versions, first made available this year. It remains to be seen if extraordinary state-level dicamba restrictions will mitigate the problem, or if farmers will make good their huge losses through class-action lawsuits against Monsanto.

However, the problems extend well beyond dicamba. The pesticide-seed industry is developing scores of GMOs resistant to other (and multiple) herbicides, long its top R&D priority. By shifting herbicide use from planting time to later in the season—when neighboring crops have leafed out and are more susceptible to injury—herbicide-resistant crop systems pose a greater risk of crop damage than early season use of the same weed-killers with traditional crops. This helps explain why glyphosate became a leading cause of drift injury only in the Roundup Ready crop era.

And the issues extend well beyond crop damage. Herbicide-resistant crop systems are potent promoters of resistant weeds, promising a future of still more intensive herbicide use, with attendant risks to human health and the environment. Indeed, dicamba resistance is already beginning to emerge in Palmer amaranth, the most feared weed plaguing farmers, and ironically the one they most depend on dicamba to kill.

Moreover, herbicide drift pits farmer against farmer, "tearing at the fabric of rural America," as epitomized by a dicamba dispute that ended in a tragic gunshot death last October. Finally, many soybean and cotton farmers who have no interest in Monsanto’s new GMOs feel compelled to grow them anyway, purely to safeguard their own crops against drift.

Of course, this option is not available to Bill Bader, as he strives to save his peach farm, nor to many other threatened growers of fruits, vegetables, organic and non-GM crops. In an agricultural landscape dominated by GMO monocultures of corn, soybeans and cotton, increasing herbicide drift threatens to ruin many small family farmers, and eliminate what little agricultural diversity remains in the heartland.

It doesn’t have to be this way. Organic growers manage weeds entirely without the use of synthetic herbicides, and reap substantial premiums for their harvests. Low-input systems involving a greater diversity of crops help suppress weeds while slashing herbicide use by 80 percent, with no loss of revenue.

It’s long past time for USDA and EPA to stop approving these hazardous herbicide-resistant GMOs and use of their companion herbicides, and instead promote sustainable farming practices to help farmers meet the growing demand for healthier foods.

Originally published on AlterNet. This article was made possible by the readers and supporters of AlterNet.

Despite the misleading claims of companies selling them, Genetically engineered (GE) crops will not alleviate traditional environmental concerns, such as the chemical contaminat…