REPORT: Most Fast Food Chains Get Poor Grades for Overuse of Antibiotics in Beef 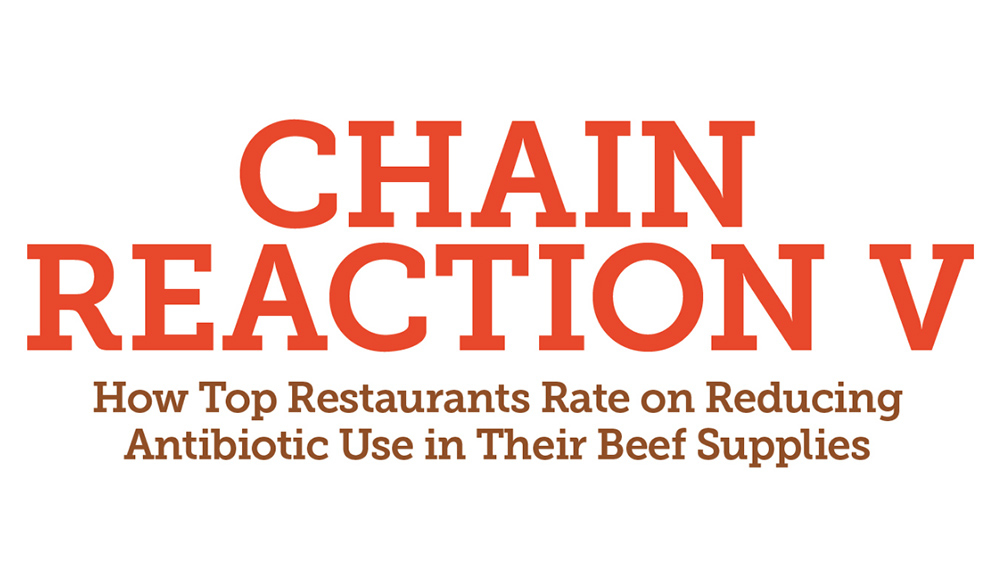 REPORT: Most Fast Food Chains Get Poor Grades for Overuse of Antibiotics in Beef

SAN FRANCISCO, CA—Most top fast food chains in the United States continue to sell beef produced with routine antibiotic use, earning them poor grades in the fifth annual Chain Reaction scorecard released today by six major consumer, public health and environmental organizations. This is a stark contrast to the stunning antibiotic success story that has unfolded across the chicken industry in the past decade, driven in large part by meaningful policies adopted by fast food companies.

Leading public health experts have long warned that curbing overuse of these drugs in livestock is essential to combating the growing epidemic of antibiotic-resistant infections in people and animals. In the absence of federal action, leadership in the marketplace is critical to solving this problem.

"These companies buy enormous amounts of meat—they have the power and the responsibility to move the needle on antibiotics," said Lena Brook, Food Campaigns Director with the Natural Resources Defense Council (NRDC). "Fast food companies helped transform practices in the chicken industry. Now they need to do it again for beef. Half-hearted efforts—like Wendy's—won't be enough. To keep these drugs working when sick people and animals need them, we need bold action before it's too late."

"That these restaurants have such a wide range of policies around sourcing meat raised with medically important antibiotics underscores the need for government regulation to mandate reductions in antibiotic use for the industry writ large," said Jaydee Hanson, Policy Director at the Center for Food Safety. "If the largest chains keep dragging their feet, the antibiotics crisis will only worsen."

The full report can be found here >>

For the first time this year the groups recognized companies for significant progress, leadership and foot-dragging with the following superlatives:

BIGGEST WANNABE: Wendy's. The nation's third-largest burger chain has made only a token gesture toward addressing the problem in its beef supply chain. It has cut the use of just one of more than two dozen medically important antibiotics approved for use in the cattle industry by just 20%, and in just 30% of its beef supply.
BIGGEST MOOVER: McDonald's. The largest beef purchaser in the world, McDonald's had no policy for antibiotics use in beef until last December when it committed to curtailing routine medically important antibiotic use across its vast global supply chain and set concrete reduction targets by the end of 2020.
EARLY LEADERS: Chipotle and Panera. These were the first two major national chains to address antibiotics in their meat supplies. Both currently serve only beef raised without the routine use of antibiotics.
BEST BURGER JOINTS: BurgerFi and Shake Shack. While these restaurants were not graded in this year's report because they are not among the overall top restaurant chains in the country, they earned this recognition for being the two largest U.S. burger chains already implementing strong policies. These companies exclusively serve responsibly raised beef across all of their restaurants. They both also posted higher year-over-years sales from 2017 to 2018, confirming better beef is a win for the bottom line.

"We're seeing mostly baby steps when it comes to reducing the massive overuse of antibiotics in the beef industry. When you consider that our ability to treat life-threatening infections is at stake, it's clear we need to take big leaps forward," said Matt Wellington, Antibiotics Campaign Director with the U.S. PIRG Education Fund. "Major beef buyers like Wendy's can help accelerate the shift away from using our life-saving medicines as a crutch for industrial beef production."

The report also graded the top fast food restaurants nationwide on the antibiotic use policies and practices behind the beef served in their restaurants.

Top performers were Chipotle (A) and Panera (A-), which earned grades in the "A" range for the fifth year in a row.

They were followed by McDonald's (C) and Subway (C). Like McDonald's, Subway has strong policies on the books, but has yet to begin implementing them.

Wendy's (D+) earned a grade in the "D" range for the second year in a row. Meanwhile, Taco Bell received a "D" for taking a minor step in the right direction with a commitment to reduce medically important antibiotics by 25% by 2025.

"Most fast food chains continue to rely on beef suppliers that waste these life-saving medications on cows that are not sick," said Meg Bohne, Associate Director of Campaigns at Consumer Reports. "By adopting more responsible antibiotics policies for beef, these restaurants can help end the misuse of these critically important drugs."

A new estimate puts the death toll from antibiotic-resistant infections in the U.S. at more than 160,000 deaths a year, which would make it the fourth leading cause of death in the country.

Nearly two-thirds of antibiotics that are important for human medicine are currently sold for use in livestock, not people. The cattle industry consumes more than any other sector.

These drugs are routinely given to healthy cattle as poor compensation for inappropriate diets and the stressful, crowded and unsanitary conditions on industrial feedlots. This practice hastens the spread of antibiotic resistance in bacteria and increases the risk of drug-resistant infections in people.

"Much antibiotic use in the beef industry is the result of unhealthy choices by cattle feeders," said Steve Roach, Food Safety Program Director at Food Animal Concerns Trust. "They feed inappropriate high-energy diets and fail to prepare calves for the transition from pasture to feedlot. Feedlots then feed routine antibiotics to manage the problems this causes."

In contrast to beef, the vast majority—92%—of chicken sold in the U.S. last year was produced without the use of antibiotics considered medically important by the FDA. Much of the positive change in chicken production has happened in the past five years. The fast food industry—under pressure from consumers and the groups behind the Chain Reaction scorecard—has been a driving force behind that progress.

"Our federal government is not working at a pace equal to the crisis we are facing from antibiotic resistance," said Laura Rogers, managing director of the Antibiotic Resistance Action Center at Milken Institute School of Public Health at the George Washington University. "So we must look to the marketplace for leadership. We've seen great progress on chicken, we need leadership now in the other meat sectors."

A 2018 Consumer Reports nationally representative survey of 1,014 adults found that 78% of respondents agreed that meat producers should stop giving antibiotics to animals that aren't sick. Fifty-nine percent said they would be more likely to eat at a restaurant that serves meat raised without antibiotics. 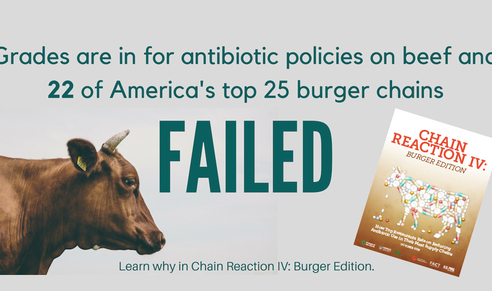 This year's Chain Reaction report and scorecard focuses on antibiotic use policies and practices for beef sold in the top 25 U.S. burger chains…
Read More 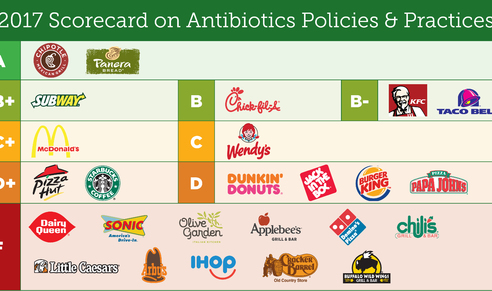 Chain Reaction III: How Top Restaurants Rate on Reducing Use of Antibiotics in Their Meat Supply

Download the Report - Download the Executive Summary More than half of the top 25 chain restaurants in the U.S…
Read More