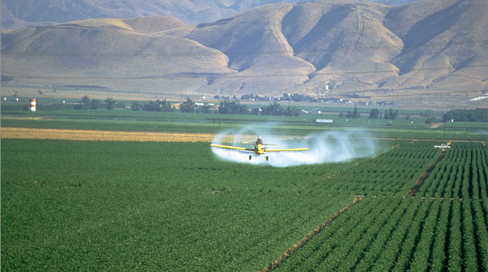 October 26, 2015 (WASHINGTON, DC)—Late Friday, Center for Food Safety and Earthjustice filed their opening brief in their ongoing legal challenge to the Environmental Protection Agency’s (EPA’s) approval of the herbicide Enlist Duo for use on genetically engineered corn and soybeans. The challenge was originally brought in November 2014, shortly after the EPA approved the controversial herbicide for 6 states. Since then, EPA has expanded its approval to a total of 15 states, with more expected. Counsel from CFS and Earthjustice are jointly representing CFS, Center for Biological Diversity, Pesticide Action Network North America, Beyond Pesticides, the Environmental Working Group, and the National Family Farm Coalition.

“The Enlist Duo approval violated the laws protecting our communities, land, and farms,” said George Kimbrell, Center for Food Safety senior attorney, counsel in the case. “Regulators bowed to the chemical industry, but we are committed to holding them accountable.”

The groups argue that in its approval of Enlist Duo, a combination of the herbicides 2,4-D and glyphosate, the agency disregarded negative impacts on sensitive species, including nearly two hundred species protected under the Endangered Species Act (ESA), from the increased use of the toxic cocktail on crops genetically engineered to withstand its application. The EPA’s own analyses also demonstrate plainly that the increased application of 2,4-D on Dow’s genetically engineered crops may affect nearby native plants, other valuable agricultural crops, and wildlife.

Earthjustice attorney Paul Achitoff commented: “Allowing this 2,4-D/glyphosate cocktail to be sprayed on the up to 150 million acres of corn and soybean acreage found in these states may harm or kill dozens of imperiled species, as well as increase the health risk to humans.  EPA is supposed to be our watchdog, not the chemical industry’s lapdog.”

2,4-D , a component of the infamous Vietnam-era defoliant Agent Orange, has been linked to serious illnesses like Parkinson’s disease, non-Hodgkin’s lymphoma and reproductive problems, and glyphosate was recently classified as a “probable human carcinogen” by the World Health Organization’s International Agency for Research on Cancer. EPA approved Enlist Duo to address the epidemic of glyphosate-resistant super weeds that now infest tens of millions of acres of U.S. farmland as a result of overuse of glyphosate—the active ingredient in Monsanto’s Roundup and a probable carcinogen—on crops genetically engineered to resist glyphosate’s effects. Dow Chemical has introduced 2,4-D resistant crops to as a quick fix to the problem, allowing farmers to douse their fields with both 2,4-D and glyphosate to kill these herbicide resistant weeds. Independent and U.S. Department of Agriculture scientists, however, predict that the Enlist Duo “crop system” will only foster expanded weed resistance to the pesticides2,4-D in addition to glyphosate, continuing the GE crop pesticide treadmill. 2,4-D is known to  drift for miles, posing a serious threat  to crops and farmers’ livelihoods.

“The lack of oversight by federal agencies is outrageous,” said Marcia Ishii-Eiteman, PhD, senior scientist at Pesticide Action Network and one of the plaintiffs. “EPA has ignored the threats to the health of rural communities and the livelihoods of farmers who rely on the agency for protection. Instead, EPA gave the greenlight to allow a dramatic increase in the use of the hazardous and volatile chemical, 2,4-D."

“With the expanded use of 2,4-D on GE crops, EPA ensures that the nation’s farmers remain on a pesticide treadmill, subject to an increasing reliance on more and more toxic chemicals,” said Jay Feldman, executive director at Beyond Pesticides.

“EPA’s reckless approval this dangerous pesticide cocktail puts hundreds of our nation’s most imperiled animals, like the majestic whooping crane, in harm’s way,” said Lori Ann Burd, environmental health director at the Center for Biological Diverstiy. “EPA has left us with no choice but to go to court to stop this dangerous product from being sprayed across the American heartland.”

EPA’s assessment identified risks to endangered species like the whooping crane, gray wolf, and Indiana bat through consumption of prey contaminated with the toxic chemical. EPA violated both the Federal Insecticide, Fungicide, and Rodenticide Act (FIFRA) and the ESA. Under the ESA, EPA is required consult with the expert wildlife agency, the Fish and Wildlife Service, to address these risks but EPA refused to do so.

A copy of the brief is available upon request.