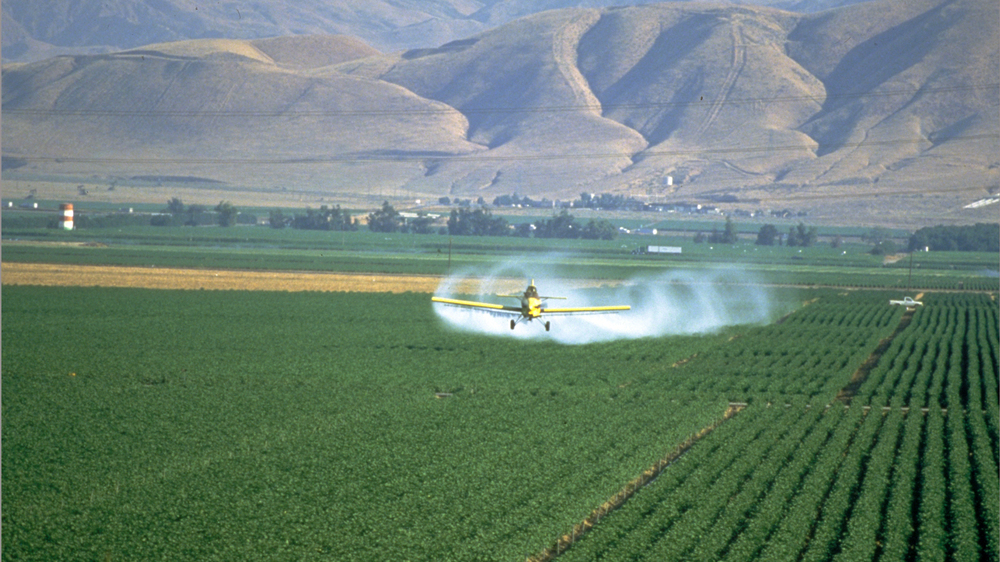 June 25, 2014 (Washington, DC)--On Tuesday, the International Agency for Research on Cancer (IARC) of the World Health Organization (WHO) determined that the widely used herbicide 2,4-dichlorophenoxyacetic acid (2,4-D) is “possibly carcinogenic to humans” (Group 2B).  The determination comes as Dow Chemical begins a limited roll-out of its “Enlist Weed Control System,” a package of “Enlist” corn or soybean seeds, which are genetically engineered to withstand 2,4-D and glyphosate, and a premix formulation of the two herbicides called “Enlist Duo.”  Dow and USDA project these crops will increase agricultural use of 2,4-D by a massive three to seven times over current levels by 2020, depending on how widely Enlist crops are planted [1].

“The last thing we need is genetically engineered crops that dramatically increase the spraying of potentially carcinogenic chemicals,” said Andrew Kimbrell, executive director of Center for Food Safety.  “Dow’s GE crops will be sprayed with Enlist Duo, which combines 2,4-D and glyphosate, a probable human carcinogen,” he added.  “There are better ways to control weeds that don’t involve cancer-causing herbicides.”

In February of this year, Center for Food Safety (CFS) and other public interest groups sued the U.S. Environmental Protection Agency (EPA), alleging violation of federal law in approving Enlist Duo, based on its likely adverse impacts on human health and the environment.  A recent Dow submission in this case shows that it has delayed a full-scale roll-out of the Enlist crop system, selling only enough GE seed and herbicide to plant and spray less than 2,300 acres this year.

IARC found that 2,4-D was possibly carcinogenic based mainly on research showing cancer in 2,4-D-treated animals and studies indicating that it suppresses the immune system and causes oxidative stress.  Surprisingly, IARC appears to have discounted many human epidemiology studies that associate 2,4-D exposure with non-Hodgkin’s lymphoma, an often fatal immune system cancer.

In 1992, U.S. National Cancer Institute scientists found that: “frequent use of phenoxyacetic acid herbicides, in particular, 2,4-dichlorophenoxyacetic acid, has been associated with 2- to 8-fold increases of NHL [non-Hodgkin’s lymphoma] in studies conducted in Sweden, Kansas, Nebraska, Canada, and elsewhere” (emphasis added).  In 2014, a comprehensive review of the literature by two IARC scientists likewise found that 2,4-D and phenoxy herbicides are associated with NHL.

“Substantial minorities” of the IARC Working Group regarded both the epidemiological and animal evidence for 2,4-D’s cancer-causing potential as more definitive.  If their views had prevailed, IARC would likely have made the stronger determination that 2,4-D is “probably carcinogenic to humans” [2], the same classification as glyphosate.

For this reason, CFS has repeatedly urged the U.S. Environmental Protection Agency (EPA) to conduct independent dioxin testing of a broad range of off-the-shelf 2,4-D formulations [4] rather than rely on industry tests.  The EPA has made no response to these requests.

“Though the evidence justified classification of 2,4-D as a probable rather than possible human carcinogen, IARC’s determination nevertheless supports what we’ve been saying for years: GE crops that foster dramatically increased spraying of hazardous pesticides have no place in American agriculture,” said Bill Freese, Science Policy Analyst at Center for Food Safety.

[3]    The IARC authors wrote: “[epidemiological] studies involving exposure to mixed herbicides or to herbicides containing dioxin were regarded as uninformative about the carcinogenicity of 2,4-D” – which implies the false belief that 2,4-D is “dioxin-free.”  In 2012, IARC classified the most toxic of the dioxin family of compounds, 2,3,7,8-tetrachlorodibenzo-para-dioxin, in its highest category (Group 1), “carcinogenic to humans.” 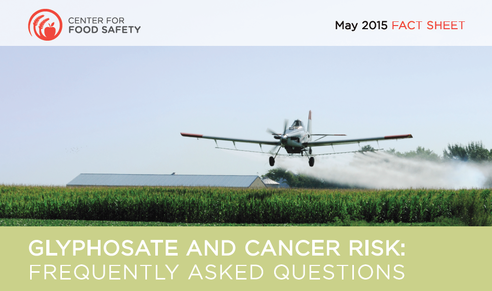 Why is there concern about glyphosate and cancer? The World Health Organization’s (WHO’s) cancer authorities – the International Agency for Research on Cancer (IARC) –…
Read More 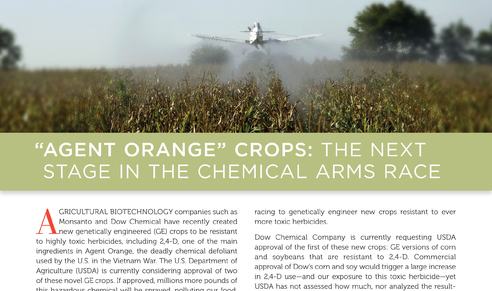 "Agent Orange" Crops: The Next Stage in the Chemical Arms Race