Monarch Numbers Up Slightly, But Butterfly Still at Risk of Extinction 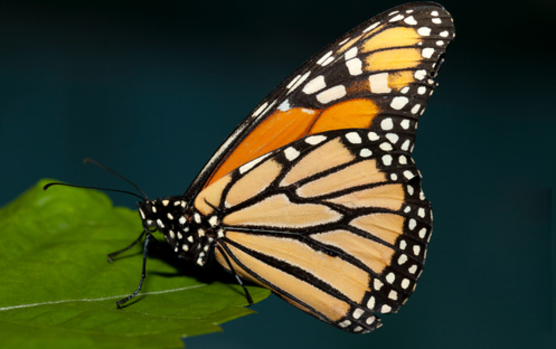 The annual overwintering count of monarch butterflies released today shows a modest population rebound from last year’s lowest-ever count of 34 million butterflies, but is still the second lowest population count since surveys began in 1993. The population was expected to be up this winter due to favorable spring and summer weather conditions in the monarch’s U.S. and Canadian breeding areas, as butterfly populations fluctuate widely with changing weather. But the 56.5 million monarchs currently gathered in Mexico for the winter still represents a population decline of 82 percent from the 20-year average — and a decline of 95 percent from the population highs in the mid-1990s. This year’s population was expected to be much larger due to nearly perfect climate conditions during the breeding season.

“Despite this small increase, monarch populations are still severely jeopardized by milkweed loss in their summer breeding grounds due to increasing herbicide use on genetically-engineered crops,” said George Kimbrell, senior attorney for Center for Food Safety. “We will continue to do everything we can to ensure monarchs are protected under the Endangered Species Act.”

Found throughout the United States during summer months, most monarchs from east of the Rockies winter in the mountains of central Mexico, where they form tight clusters on trees. Scientists from World Wildlife Fund Mexico estimate the population size by counting the number of hectares of trees covered by monarchs. Monarchs need a very large population size to be resilient to threats from severe weather events, pesticides, climate change, disease and predation. A single winter storm in 2002 killed an estimated 500 million monarchs, more than eight times the size of the current population even with this year’s boost.

Concerns over the extinction risk of the monarch led Center for Food Safety, the Center for Biological Diversity, the Xerces Society and renowned monarch scientist Dr. Lincoln Brower to petition the U.S. Fish and Wildlife Service in August to protect the butterfly as threatened under the Endangered Species Act. In December, the Service announced that protection may be warranted for the monarch and is now conducting a one-year review of its status.

“The population increase is welcome news, but the monarch must reach a much larger population size to be able to bounce back from ups and downs, so this much-loved butterfly still needs Endangered Species Act protection to ensure that it’s around for future generations,” said Tierra Curry, a senior scientist at the Center for Biological Diversity.

“We are extremely pleased that the population has increased, but remain very concerned about the monarch’s still very tenuous future,” said Sarina Jepsen, the Xerces Society’s endangered species director. “The monarch needs to be protected as a threatened species to enable extensive monarch habitat recovery on both public and private lands.”

The butterfly’s dramatic decline has been driven in large part by the widespread planting of genetically engineered crops in the Midwest, where most monarchs are born. The vast majority of genetically engineered crop acres are in varieties made to be resistant to Monsanto’s Roundup herbicide, a potent killer of milkweed, the monarch caterpillar’s only food. The dramatic surge in the use of Roundup and other herbicides with the same active ingredient (glyphosate) with Roundup Ready crops has virtually wiped out milkweed plants in Midwest corn and soybean fields. In the past 20 years it is estimated that these once-common, iconic orange-and-black butterflies may have lost more than 165 million acres of habitat — an area about the size of Texas — including nearly a third of their summer breeding grounds.

There has been a widespread effort to encourage people to plant milkweed to help the monarchs, but planting the wrong species of milkweed or planting pesticide-treated milkweed can actually harm the butterflies. The planting of tropical milkweed that doesn’t die back in the winter increases the risk of disease-related death for monarchs and interferes with migration. Planting milkweed and other flowers that have been treated with neonicotinoids or other systemic insecticides can also harm the very butterflies that gardeners are trying to help save. Most insecticide-treated plants are unlabelled, so consumers must ask retailers about the stock to make sure they aren’t planting flowers that could be lethal to pollinators.

Logging on the monarch’s Mexican wintering grounds is also a conservation concern, although Mexican authorities have made great progress in reducing the amount of logging in these locations. Scientists have predicted that climate change could render large parts of the monarch’s summer range in the states unsuitable due to changing temperatures and increased risk of drought, heat waves and severe storms. The monarch’s entire winter range in Mexico could become climatically unstable by the end of the century.

This year’s winter count of monarchs from the western United States that overwinter on the California coast shows the population of around 235,000 monarchs holding steady after undergoing an approximately 50-percent decline from the 18-year average.