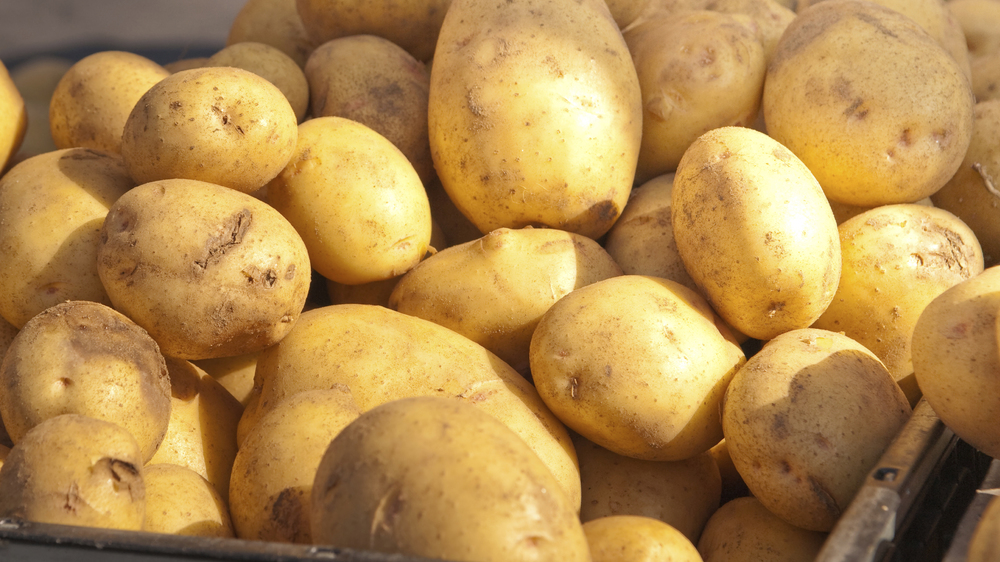 November 7, 2014 (Washington, DC)--Center for Food Safety (CFS) is today warning consumers about a new genetically engineered (GE) potato that may soon enter the food supply. Because GE foods are not required to be labeled, the new GE potato will be sold to consumers without their knowledge. The GE potato was one of two new crops approved today by the U.S. Department of Agriculture (USDA) that uses a new, little understood form of genetic engineering called RNA interference (RNAi). The other is a new low-lignin alfalfa from Monsanto. Despite the unprecedented nature of these approvals, USDA has inexplicably failed to undertake the legally required rigorous and overarching analysis of the GE crops’ impacts or reasonably foreseeable consequences.

“We simply don’t know enough about RNA interference technology to determine whether GE crops developed with it are safe for people and the environment.  If this is an attempt to give crop biotechnology a more benign face, all it has really done is expose the inadequacies of the U.S. regulation of GE crops.  These approvals are riddled with holes and are extremely worrisome,” said Doug Gurian-Sherman, Ph.D., CFS director of sustainable agriculture and senior scientist.

Analysis of RNAi by a panel of independent scientists requested by the Environmental Protection Agency concluded that there were many significant uncertainties about potential risks from this technology, and that current risk assessment procedures were not adequate. Despite such cautions USDA is rushing the technology forward.

Unlike earlier genetic engineering techniques that splice in segments of DNA, the new technique used in the Simplot potato and Monsanto’s low-lignin alfalfa is based on the manipulation of the plant’s RNA-based control mechanisms.  RNA interference (RNAi) induces the plant to silence or dial back expression of the plant’s own genes, such as those responsible for natural processes like browning or lignin production.. However, RNA manipulations may end up turning down, or off, genes other than those that were targeted because many genes contain similar, or even identical, stretches of DNA. Current testing requirements do not reliably  detect such effects on other important crop genes.

Developed by the J.R. Simplot Company, the potato would be the only GE potato variety on the U.S. commercial market. The Simplot potato has been genetically engineered with RNAi technology to reduce browning by silencing the expression of one of five polyphenol oxidase genes, which is normally highly expressed in potato tubers. This is attractive to the potato processing industry because bruised potatoes are culled for cosmetic reasons. However, bruised potatoes have not been associated with health risks.

These potatoes are also silenced for genes affecting sugar production and the amino acid asparagine, which during frying and baking lead to the production of acrylamide, a probable carcinogen. However, it is unclear whether the observed reductions will lead to positive health outcomes, given that acrylamide is found in many other foods. In addition, fried potato products have other serious negative health effects.

“In light of the obesity crisis, there has been an important national push to discourage children and adults from eating large quantities of fried foods like french fries or chips. In creating the false illusion that fried potatoes are now healthy, the Simplot potato sends the absolute opposite message,” said Elizabeth Kucinich, policy director at CFS. “Claims of health benefits by USDA and Simplot are short sighted, misleading, and in the light of the science, could actually be potentially dangerous.”

The asparagine gene has also been shown in recent research to be important in plant defenses against pathogens. The Simplot potato was not adequately tested for a possible weakening of its ability to defend itself against disease.  If this occurs in the field, it could lead to increased fungicide use, greater farmer expense, and possibly reduced productivity. The latter effect was seen in several tests of these potatoes.

“We need answers to these questions before these potatoes are commercialized,” said Gurian-Sherman.

Monsanto and Forage Genetics International (FGI) have genetically engineered alfalfa for reduced levels of lignin through the suppression of a key enzyme in the lignin biosynthetic pathway. It represents the first non-regulated GE crop with reduced lignin levels.  Lignin and its building blocks perform many functions in plants, including structural stability and plant defense.  Lowering lignin levels could make the alfalfa more prone to attack by insects or diseases, and potentially increase pesticide use.  Moreover, there are still many unknowns about how plants make lignin, making it premature to manipulate this important pathway.  Additionally, alfalfa is a perennial crop and can cross-pollinate at great distances, allowing it to interbreed with other types of alfalfa. Any adverse impacts of the new variety will therefore be spread rapidly through much or all of the alfalfa seed supply

USDA assessed the risk from these crops under the inadequate plant pest provisions of the Plant Protection Act (PPA) of 2000. USDA has ignored the noxious weed provision of the PPA, which would allow a more thorough risk assessment. By failing to develop reasonable regulations under the PPA 14 years after its passage, USDA continues to fail in its mandate to protect the public and the environment.