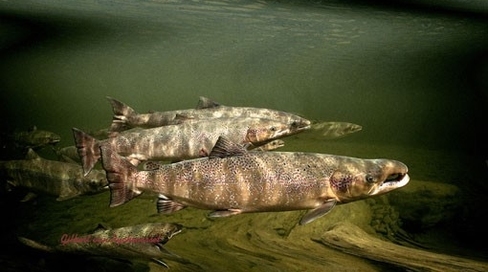 Officials in Panama have ruled that AquaBounty Technologies’ has been operating in violation of environmental regulations as it experiments with genetically engineered (GE) salmon in that country. In a decision that could challenge the U.S. Food and Drug Administration’s (FDA) ongoing safety assessment of AquaBounty’s GE salmon, Panamanian officials fined the company $9500. Food & Water Watch, Center for Food Safety and Friends of the Earth called on the FDA today to terminate its regulatory review and deny AquaBounty’s pending regulatory application to sell the company’s GE fish in the United States.

“FDA has always assured the public that it is checking, monitoring and regulating AquaBounty’s production platform to ensure the company can mitigate the well-documented environmental impacts of escaped GE salmon,” said Wenonah Hauter, executive director of Food & Water Watch.  “We now know that AquaBounty is unwilling or unable to follow basic rules and regulations, and FDA is unable or unwilling to enforce them. It’s time to put an end to this dangerous experiment.”

Last week’s decision from Panamanian National Environmental Authority came in response to a complaint filed last year by a Panamanian environmental organization, Centro de Incidencia Ambiental (CIAM).  Regulators found AquaBounty out of compliance with a raft of environmental safety rules and regulations, including failing to secure legally required permits related to water use and water discharge prior to beginning operations. They concluded that “We are of the opinion that it [AquaBounty] has repeatedly violated the aforementioned environmental regulations.” The ruling carries a $9500 penalty, near the $10,000 maximum penalty allowable.

“AquaBounty has not been able to follow the law, because it lacks the capacity, sophistication, will, or all of the above,” said George Kimbrell, senior attorney for Center for Food Safety.  “This decision is also even further proof that FDA is dangerously out of touch with the facts on the ground, advancing AquaBounty’s application based on its promises, not reality.”

AquaBounty’s facility in Panama has long experienced serious security issues, including a storm-related accident that lead to “lost” salmon in Panama. A visiting journalist described the company’s facility as a “run-down shed.”

To date, FDA has made no regulatory decision on AquaBounty’s GE salmon, which, if approved, would be the first biotech animal to enter the food supply anywhere in the world.  FDA’s current regulatory review only considers one production scenario in which AquaBounty produces GE salmon at a remote facility in Panama, then sends fillets to U.S. retailers.  Critics have long-worried that AquaBounty chose its out-of-the-way production facility as a way to evade regulatory scrutiny.

“AquaBounty’s days of hiding in the highlands of Panama are over.  This is even more evidence that the FDA should deny approval of AquaBounty’s application for genetically engineered salmon,” said Dana Perls, food and technology campaigner at Friends of the Earth.  “Once these fish escape, it is impossible to retrieve them.  And it may be extremely difficult to contain the negative environmental impacts of escaped fish.”

A copy of the ruling can be found here.

Center for Food Safety is a national, non-profit, membership organization founded in 1997 to protect human health and the environment by curbing the use of harmful food production technologies and by promoting organic and other forms of sustainable agriculture. CFS maintains offices in Washington, D.C., San Francisco, California, Portland, Oregon and Honolulu, HI. More information can be found at www.centerforfoodsafety.org.

Food & Water Watch works to ensure the food, water and fish we consume is safe, accessible and sustainable. So we can all enjoy and trust in what we eat and drink, we help people take charge of where their food comes from, keep clean, affordable, public tap water flowing freely to our homes, protect the environmental quality of oceans, force government to do its job protecting citizens, and educate about the importance of keeping shared resources under public control. www.foodandwaterwatch.org