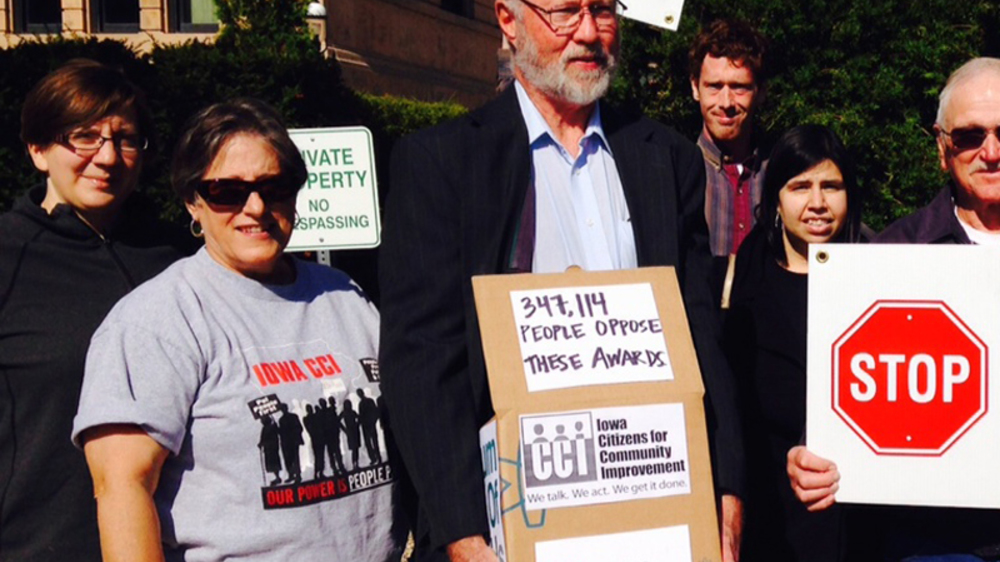 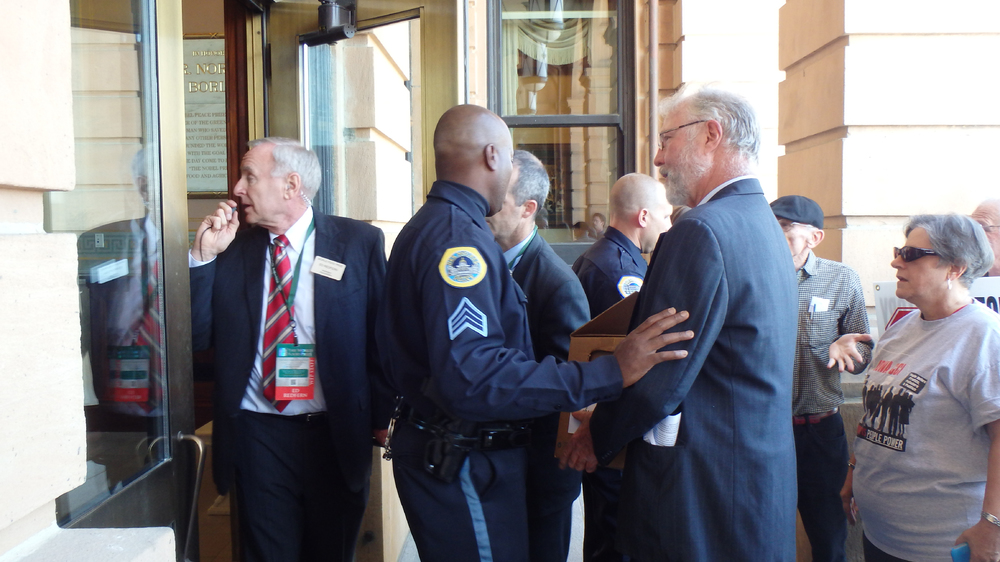 Today, Center for Food Safety (CFS), Pesticide Action Network North America (PANNA), SumOfUs.org, and Iowa Citizens for Community Improvement (Iowa CCI) delivered petitions signed by over 345,000 people admonishing the World Food Prize—a prize dedicated to furthering a “nutritious and sustainable food supply”—for awarding this year’s Prize to top executives from agrichemical giants Monsanto and Syngenta. The signatures were delivered to the World Food Prize headquarters by George Naylor, CFS Board Member, member of Iowa CCI, and Iowa corn and soybean farmer; and members of Pesticide Action Network and the Iowa Citizens for Community Improvement. A group of farmers from Iowa and Haiti accompanied the representatives to deliver the petitions. The petition delivery kicked off a four hour vigil in front of the World Food Prize Foundation headquarters. The prize, awarded in Iowa today, is part of the annual World Food Day celebrations.

“With this award, the World Food Prize is perpetuating the false notion that genetically engineered crops are a solution to world hunger and malnutrition. This kind of biotech propaganda obscures the huge potential of low-cost agricultural techniques that actually increase food production and alleviate hunger. Awarding the World Food Prize to these biotech giants only serves to divert attention from these truly ‘nutritious and sustainable’ approaches,” said Andrew Kimbrell, executive director for Center for Food Safety.

The World Food Prize is often referred to as the “Nobel Prize of agriculture,” where individuals around the globe ostensibly doing the important work of increasing food safety and security are recognized. In its own words, the Prize “emphasizes the importance of a nutritious and sustainable food supply for all people.”

Contrary to the biotech industry myth the World Food Prize is perpetuating, GE crops do not create more food, more access to food, or more nutritious food, and instead actually endanger food security. As far back as 1998, African scientists representing many of the nations affected by poverty and hunger warned that GE crops would undermine the nations’ capacities to feed themselves by destroying established diversity, local knowledge and sustainable agricultural systems, despite a manipulative Monsanto ad campaign featuring photos of African children and the subtitle “Let the harvest begin.”

"The World Food Prize could and should be an inspiring beacon drawing attention to the injustice of global hunger in an age of plenty, and celebrating those who fight for real solutions," said Margaret Reeves at Pesticide Action Network. "Instead, the World Food Prize has chosen to honor chemical company representatives for a technology that has consistently failed to deliver on promises of increased yields and improved nutrition."

According to a joint project between the United Nations and the World Bank, the high cost of GE seeds and chemicals along with uncertain crop yields make GE crops a poor choice for farmers, particularly in the developing world.

“As a farmer, I’m no stranger to the marketing of biotech companies like Monsanto. First they said using Roundup Ready crops would decrease the amount of chemicals needed to grow them. Of course that turned out to be false,” said George Naylor, an Iowa corn and soybean farmer and CFS board member. “They would like us to believe that the way to run agriculture is to buy their GE seeds, buy their chemicals and just spray the land year after year without thinking about what it’s doing to our landscape, to our environment.”

The vigil and delivery of the 347,000 petition signatures comes just hours before the awards ceremony, where demonstrations are expected.

"GMOs and factory farms are destroying the state of Iowa, independent family farmers, and the planet, and we need to bust up big ag and empower women, immigrant, and young farmers if we really want to solve world hunger," said Larry Ginter, a farmer and a member of Iowa Citizens for Community Improvement from Rhodes, Iowa.

About SumOfUs.org
SumOfUs.org is a global movement of consumers, investors, and workers all around the world, standing together to hold corporations accountable for their actions and forge a new, sustainable and just path for our global economy. It’s not going to be fast or easy. But if enough of us come together, we can make a real difference. Online at www.sumofus.org.

About Pesticide Action Network North America
Pesticide Action Network North America (PAN North America, or PANNA) works to replace the use of hazardous pesticides with ecologically sound and socially just alternatives. As one of five PAN Regional Centers worldwide, we link local and international consumer, labor, health, environment and agriculture groups into an international citizens’ action network. This network challenges the global proliferation of pesticides, defends basic rights to health and environmental quality, and works to ensure the transition to a just and viable society. Online at www.panna.org

About Iowa Citizens for Community Improvement
We are everyday people who talk, act, and get things done on issues that impact us"¨ the most. At Iowa CCI we truly are by the people and for the people. We don’t stand by and just let things happen; we work together to make our state a better place for everyday people. We believe in putting people first, and, we put our communities before corporations! Online at www.iowacci.org/