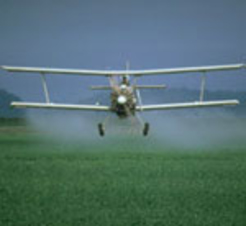 Dow Chemical is currently requesting an unprecedented USDA approval: a genetically engineered (GE) version of corn that is resistant to 2,4-D, a major component of the highly toxic Agent Orange. Agent Orange was the chemical defoliant used by the U.S. in Vietnam, and it caused lasting ecological damage as well as many serious medical conditions in both Vietnam veterans and the Vietnamese.

Exposure to 2,4-D has been linked to major health problems that include cancer (especially non-Hodgkin’s lymphoma), lowered sperm counts, liver disease and Parkinson’s disease.  A growing body of evidence from laboratory studies show that 2,4-D causes endocrine disruption, reproductive problems, neurotoxicity and immunosuppression.  Further, industry’s own tests show that 2,4-D is contaminated with dioxins, a group of highly toxic chemical compounds that bioaccumulate, so even a minute amount can accumulate as it goes up the food chain, causing dangerous levels of exposure.  Dioxins in Agent Orange have been linked to many diseases, including birth defects in children of exposed parents; according to EPA, 2,4-D is the seventh largest source of dioxins in the U.S. Read More and TAKE ACTION! >>>