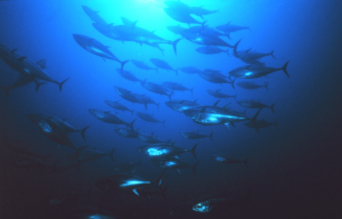 Few things get a media frenzy going like the combination of two words: radiation and food. Despite the ubiquitous availability of truly unhealthy foods 24/7, just raise the specter of radioactivity on our plates, and people suddenly get very serious about what they are eating. And the media fans the flames.

So when scientists reported traces of radioactive chemicals from the Fukushima nuclear meltdown found in Bluefin tuna caught off the California coast, news outlets raced to post scary headlines like “Radioactive Tuna Swim from Japan to California” and “Radioactive tuna travels from Japan to US faster than wind.”

But how scary is it? Not as scary as it sounds.

The researchers themselves told NPR that while they were surprised (“We did not expect to see this radioactivity retained by the fish during their trans-Pacific voyage”) they were not concerned about potential health risks. That’s because the amounts detected were so small, and tuna naturally contains some radiation. As NPR’s Richard Harris explains:

If you are still worried about the cesium from Fukushima, Robert Emery at the University of Texas Health Science Center at Houston says you’d need to eat 2.5 to 4 tons of tuna in a year to get a dose of cesium-137 that exceeds health limits. That’s a lot of sushi.

Also, Americans hardly eat Bluefin tuna. Most of what’s caught in the Pacific is sold to high-end seafood markets in Japan.

The lasting effects of Fukushima should never be dismissed or underestimated. Learning that Bluefin tuna caught off California contain traces of radioactivity is disturbing regardless of health risks to fish eaters. It’s yet another example of how the human race continues to find new ways to damage the planet and its inhabitants.

The fact is when it comes to tuna, we have more serious problems to worry about, like mercury and overfishing. Even the U.S. Food and Drug Administration warns against excessive tuna (and other fish) consumption due to mercury contamination. Here’s how Newsweek’s Daniel Stone explains the bigger picture:

David McGuire tests Pacific seafood for mercury with GotMercury.org, a part of the Turtle Bay Restoration Network. His team has found yellowfin tuna, a species more common to American plates, to sometimes have more than 1 part per million of mercury, the federal limit set by the FDA. Bluefin species have registered up to six times higher than federal standards. It’s harder to identify the source, but burning coal, which produces organic methyl mercury, is the major global factor that has increased over the past century. “That’s what we should be focused on,” he says. “We need to change our own habits if we’re concerned about our health and the health of the oceans.”

Moreover, the Monterey Bay Aquarium’s Seafood Watch, has a handy guide that rates Bluefin as “avoid” due to overfishing. The recommendation is for both wild-caught and farmed Bluefin, the latter because they deplete stocks of small fish. Ironically, the current radioactive tuna scare could actually help restore Bluefin stocks if the tuna market tanks.