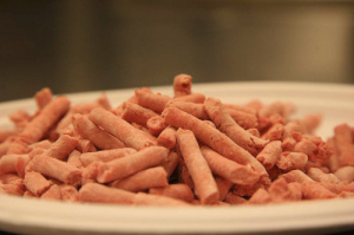 This past week, the media woke up to the shocking reality that our meat supply is in fact industrialized. Long gone are the days of your friendly local butcher grinding meat for your kids’ hamburgers. Taking its place is a corporate behemoth you probably never heard of called Beef Products Inc. BPI now finds itself on the receiving end of consumer outrage over its ammonia-treated ground beef filler a former USDA official coined “pink slime.” Thus far, a petition aimed at getting current USDA officials to stop using the scary stuff in school lunches has garnered more than 200,000 signatures in about a week. What’s this all about? How did this disgusting stuff wind up in 70 percent of ground beef sold in supermarkets? And why if McDonald’s and other fast food chains have stopped using the filler, is the federal government still purchasing it – to the tune of 7 million pounds to be fed to schoolchildren?

The beef industry is always looking for ways to cut corners, and so Beef Products Inc. devised a clever high-tech method to make money from what you and I would consider garbage, but what industry euphemistically calls “trimmings.” But they had a couple of problems: it’s very fatty and prone to bacterial contamination. Here is how ABC News described the process in its recent story:

The “pink slime” is made by gathering waste trimmings, simmering them at low heat so the fat separates easily from the muscle, and spinning the trimmings using a centrifuge to complete the separation. Next, the mixture is sent through pipes where it is sprayed with ammonia gas to kill bacteria. The process is completed by packaging the meat into bricks. Then, it is frozen and shipped to grocery stores and meat packers, where it is added to most ground beef.

The main way BPI and the meat industry has defended using ammonia (see this silly website just up - http://pinkslimeisamyth.com) is by claiming the safety benefits in reducing bacteria. This claim was soundly disputed back in 2009 in a Pulitzer-prize winning expose by the New York Times, which found, for example, that ground beef containing BPI’s product was four times more likely to contain salmonella than regular ground meat.

Also, Kit Foshee (who worked as BPI’s Corporate Quality Assurance Manager for ten years before he was fired for not doing BPI's bidding) – disputes the company’s safety claims in great detail. At a conference I attended last year on food safety and whistleblowers, Foshee called BPI’s claims of reduced levels of the deadly strain of E. coli 0157:H7 “totally misleading.”

He also said BPI would manipulate test results in various ways, including not using the most effective testing methods available for detection. He said BPI’s claims that its testing was the best in the industry was “a farce” and that “all they wanted was a test to give a negative result” and move on.

Amanda Hitt, director of the Food Integrity Campaign also disputes BPI’s claims of food safety and says the goal was to offer up cheap filler for hamburgers: “This product was never about safety, it’s about economics.”

Another laughable meat industry response has been that the filler is “lean” – made up of 94% lean beef says BPI. So of course, this makes it good for you!

Just to recap: industry is taking scraps from animal carcasses, which are full of fat, and then through a laboratory process of heating and centrifugation, made “lean.” Could there be alternative methods of making lean beef, say based on how cows are fed in the first place? Yes, but those would be way more expensive, when heating and dousing with ammonia is so much easier.

In other words, pink slime is just one of many problems with industrialized meat. Let’s not lose sight of this bigger picture, as registered dietitian Andy Bellatti noted in his recent post “Beyond Pink Slime:”

[T]he majority of ground beef in the United States, even if free of said "slime", comes from animals (35 million beef cattle, to be exact) that are treated miserably, is processed by employees under horrible working conditions, and severely damages the environment. And, of course, there are also the rampant recalls and food safety concerns.

What to do about it? Demand labeling, buy organic, or just don’t eat ground beef.

Most importantly, we have to realize that cheap food comes at a cost. Let’s hope the current media focus on this symptom leads to increased scrutiny of the larger problems with industrialized meat beyond the obvious yuck factor here.