A Budget Cut Only the Produce Industry Could Love 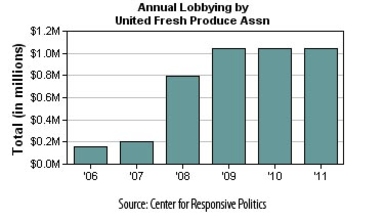 You’ve probably never heard of the Microbiological Data Program (MDP) but if you eat fresh produce, you should, because it’s currently on President Obama’s budgetary chopping block. The MDP is a small ($5 million annually) pathogen monitoring program tucked away in the U.S. Department of Agriculture. It tests fruits and vegetables for deadly bugs like E. coli, salmonella, and listeria.

While the testing program may be inexpensive, it’s critical because no other federal mechanism currently exists to conduct regular testing of fresh produce. (The Food and Drug Administration—which technically has jurisdiction over produce safety—conducts only limited inspections.)

To date, the MDP has tested high-risk produce such as alfalfa sprouts, cilantro, green onions, peppers, tomatoes, spinach, and other leafy greens. Every one of these vegetables has caused a food-borne illness outbreak or recall over the years, some of them lethal thanks in part to an industrialized food system that transports bugs nationwide. You might recall, a shocking 34 people (and counting) died from a listeria outbreak last year in cantaloupe in 26 states (yes, melon – also on USDA’s tested produce list). That tragedy alone should cause the Obama Administration to rethink this thoughtless budget cut.

It’s not like this is some wasteful government program. It’s a relatively cheap way to help save lives, so what’s going on? Here is how food safety attorney Bill Marler explains who just might be behind the idea:

The produce industry hates this program as it has found pathogens in domestic and imported samples and FDA has responded to the information and recalled products. The produce industry—via the fruit and vegetable advisory committee—recommended to USDA and Congress that the program be terminated.

The produce industry hates the program? Now we’re getting somewhere.

According to this AP story, lobbyists with the United Fresh Produce Association and other major trade associations “have repeatedly pushed the government in recent years to get rid of the comprehensive testing program, saying it has cost growers millions in produce recalls.” (Isn’t that the idea—to get tainted food off the market?) Instead, industry suggests more private sector testing.

More private sector testing? Like the third-party “audit” that missed the deadly listeria in the cantaloupe at Jensen’s Farms? According to a Congressional report on the matter released in January, FDA called it “an inherent conflict of interest" for a private auditor to provide safe handling advice in exchange for payment. Moreover, such auditors don’t have to adhere to scientific standards, are not regulated by the FDA, and cannot enforce FDA rules.

This is also the same United Fresh Produce Association that claims to care about food safety but does not want to pay the fees necessary to fully implement the Food Safety Modernization Act, the new law intended to improve inspection and oversight by the Food and Drug Administration. According to the Center for Responsive Politics, the United Fresh Produce Association has spent more than a million dollars a year on lobbying in each of the past three years. Of course only some of that money was spent lobbying on food safety but the trade group must expect a good return on its investment.

For its part, USDA claims the program doesn’t belong there but is better suited to FDA, raising once again, the challenges caused by our currently fragmented oversight system and lack of a single, effective food safety agency.

The Food Safety Modernization Act may help fix some of these problems, but we still have to find the funding. Obama’s budget also seeks a 17 percent increase for FDA, but almost all of the new money would come from industry fees, which again, industry is dead set against. Moreover, it’s not at all clear that FDA will pick up the slack from USDA’s testing of fresh produce.

In sum, Obama is proposing to cut a nominal food safety program that’s working fine, while suggesting new funds come from fees that industry will fight. Of course, testing won’t solve all problems either. Not with an industrialized food system that consistently externalizes costs in favor of profits. Maybe if we examined how massive consolidation of produce growers, processors, and distributors contributes to these nasty outbreaks in the first place, and considered better prevention through smaller-scale production models, we wouldn’t have to haggle over this testing program. But meantime, can’t we find somewhere else to cut $5 million that doesn’t make our problems even worse?

Michele Simon is a public health lawyer who has been researching and writing about the food industry and food politics since 1996. She has taught Health Policy at the University of California, Hastings College of the Law, and lectures frequently on corporate tactics and policy solutions. She has written extensively on the politics of food, and her first book, Appetite for Profit: How the Food Industry Undermines Our Health and How to Fight Back, was published by Nation Books in 2006.

Michele recently joined the Center for Food Safety as a Policy Consultant, where she will help CFS expand into issues related to food safety and nutrition, while connecting the dots to the larger problems of our industrialized food system and the political influence of the food industry.

She is also president of Eat Drink Politics, an industry watchdog consulting firm. Simon has a master’s degree in public health from Yale University and received her law degree from the University of California, Hastings College of the Law.