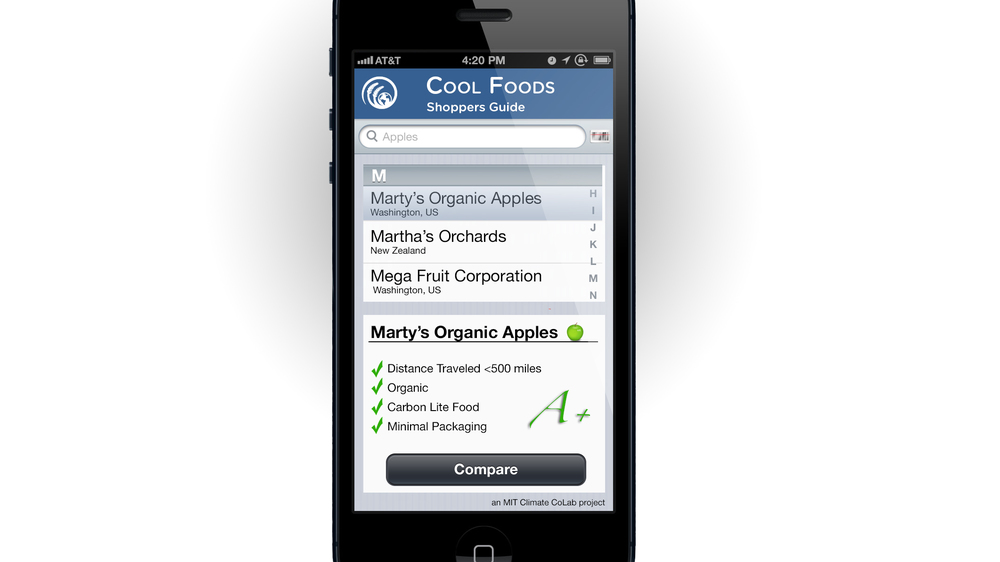 “Food Solutions to Climate Problems? There’s an App for that!”

Center for Food Safety’s “Cool Foods” Campaign has received the Judges Choice Award for “Reducing consumption” in the 2012-2013 MIT Climate CoLab contest. Out of 400 submissions, Center for Food Safety (CFS) was one of 28 first round winners. CFS is now competing for a $10,000 grand prize to make the campaign proposal a reality. Cool Foods’ international team will present the proposal to the MIT Climate CoLab conference in Cambridge, Massachusetts on November 7th.

Agriculture accounts for nearly one third of greenhouse gas emissions, but consumers can make choices with every meal that reduce their carbon footprint. To help consumers make “climate-smart” decisions, the Cool Foods Campaign proposes a food rating system for smart phones. The system is based on seven simple guidelines: fresh, local, organic, in-season, low-waste, pasture-raised, and unprocessed. See a mockup of the app design here.

“What we eat makes a difference,” said Diana Donlon, Cool Foods Campaign Director. “There are food solutions to climate problems. In fact, by scaling up sustainable agriculture we could potentially sequester up to 40% of current carbon dioxide emissions while significantly curtailing the use of even more powerful greenhouse gasses like methane and nitrous oxide.”

Cool Foods’ international team is represented by Francesca Allievi, a PhD student from Milan, Italy. Allievi will present the proposal and discuss implantation with an expert panel convened by MIT.

“There are so many dimensions to look at when quantifying carbon emissions associated with food,” the contest Judges stated. “It’s a complicated problem, but with initiatives like this one, we think it’s one that’s solvable.”