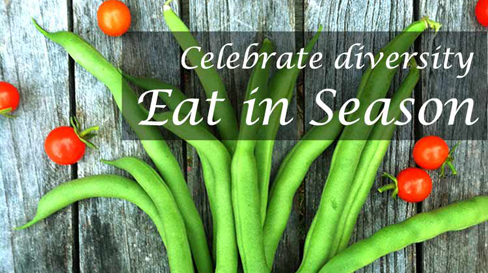 In his engrossing new book, The Third Plate, Dan Barber observes that our present food system is disconnected:

It operates in silos: vegetables here, animals there, grains somewhere else – each component part separate from the others and unhitched to any kind of culture.

This disconnection has resulted in vast monocultures in agriculture that create a litany of complex, sobering, and by now familiar problems. Should you need a quick refresher, industrial monocultures rely on fossil fuels, encourage animal cruelty, endanger pollinator health, deplete soil fertility, and are susceptible to crop failure in the face of an increasingly unstable climate.

How might we instead go about promoting a culture of food diversity that creates cultural connection, is humane and healthy and strengthens our capacity for resilience? It is a tall order, but it seems to me that observing and celebrating seasonality might go a long way toward achieving these goals. Celebrating seasonality provides an opportunity to learn where our food comes from and how it's produced.  It allows us to highlight regional variety and food traditions, while anticipating and appreciating distinctive flavors made possible by genetic diversity. Seasonality requires us to value the importance of diversity in the food system as well as recognize the folly of over-reliance on just a handful of uniform crops.

When you eat in season, you are connecting to nature’s rhythms. In spring nature typically expresses itself with an outpouring of plant growth,  summer means long, light-filled days, fall may be marked by plants going to seed in all manner of ways, and winter typically signals a period of rest for the land. Food reflects this continuous ebb and flow. A perfect summer peach is so satisfying precisely because it connects us to the expectation of abundance, and concentrated sweetness of warm, sunny days. A peach that has flown half way around the world to be eaten in January can’t provide that same sense of satisfaction. Likewise, produce that is transported over long distances or stored for extended periods of time loses nutrients.

Eating with the seasons allows us to experience peak freshness and intense flavor. A decade before organic and local were highlighted on menus, Barber had an epiphany when he ate a legendary Sun Crest peach, a varietal grown by Central Valley farmer, Mas Masamoto:

It was the best peach of my life, but I have to qualify that, because, like most Americans born in the past fifty years, I didn’t know what a peach should taste like. Breeders in the 1970s and ‘80s created new varieties for functionality, not for flavor…

Eating with the seasons can enhance our food experiences while encouraging us to rotate foods in and out of our diet as nature clearly intended. Years ago, I was a Peace Corps volunteer in Morocco, a country known for its distinctive cuisine that highlights a dazzling array of fruits, vegetables, and grains made possible by its Mediterranean climate. One market day, I had my own small epiphany while noting the appearance of piles of fresh, unshelled peas, freshly in-season, and arranged in cone-shaped mounds three to four feet high. Accustomed primarily to frozen peas at any time of year, I hadn't realized fresh peas had an actual season. No doubt, families all around the region would be dining on peas that night. In fact, you might knock on the doors of ten Moroccan families and 9 of those 10 would be having peas precisely because they were a fresh, seasonal, and widely available treat. It struck me that in the United States, our culture did not possess the same kind of national or seasonal culinary glue that undergirded Moroccan culture. Knock on ten doors in the U.S. and it would be pretty unlikely that you’d ever find 10 households eating the same food no matter what the season. The great exception, of course, is Thanksgiving when the nation finds and celebrates connection around the seasonality of North American favorites like cranberries, pecans, and pumpkins.

Barber, who subtitled his book, field notes on the future of food, introduces us to Glenn Roberts, a rare seeds collector, rice breeder, and supplier of specialty grains in South Carolina. As we contemplate our food future which we know will include more mouths to feed on the same amount of land, Roberts warns us that:

Food and cuisine have to be an important part of our culture, and not just something that fuels the culture in one way. Food as fuel is a dangerous concept. That’s where we are right now – food as fuel.

Reconnecting to the richness of distinct seasons provides a template for emphasizing food culture over food as fuel. This won’t be easy in the U.S. where corn is king and synonymous with fuel. Indeed, the amount of harvested corn has gone up 65% over the last 50 years and USDA estimates that 177 million hectares will be harvested this year.

Culture is, however, powerful in its own right and has a much longer and richer history than monoculture. Central to food culture, of course, is place because cuisine is linked to seasonality and geography.  In fact seasonality and geography are what give a cuisine authenticity. You don’t have to become a celebrated chef or join the Peace Corps to find cultural connection in authentic, local, seasonal meals. You can begin the journey by learning what grows best in your own region and then opting to first taste and then use a cornucopia of seasonal ingredients at their peak.