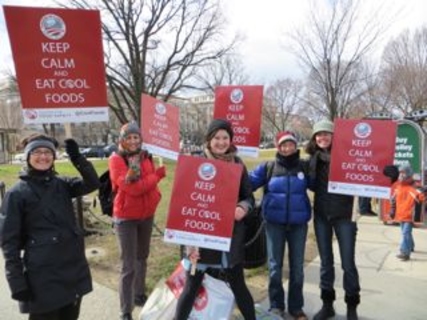 “Keep Calm and Eat Cool Foods” read our cherry-red signs as the Cool Foods Campaign marched toward the Washington Monument on Sunday, February 17th. If you follow our social media you already know that Center for Food Safety’s Cool Foods Campaign joined the Sierra Club, 350.org, NRDC, and the Hip Hop Caucus as one of 120 partner organizations uniting to tell President Obama and Congress to move Forward on Climate. By Sunday the 17th, the ranks had swelled to nearly 170 organizations, and by noon that day the message was loud and clear: more than 40,000 people braved Washington DC’s February wind chill to march in the largest climate rally in history.

Bright and early Sunday morning the W Hotel was buzzing. The rally organizers had taken over the first floor to meet and greet, while college campus contingents filled a ballroom with strumming guitars and last-minute sign making. Around the corner, buses from 30 states were delivering activists of all ages to the sloping lawn of the National Mall. Moving toward the Washington Monument, the scene was bursting with patriotic posters calling for “Climate Action” in red, white, and blue, punctuated by “No KXL” messages in black letters that rose from the crowd like plumes of the fossil fuels they protested.

At 12 noon attention shifted toward the main stage, where rally leaders addressed the crowd through booming speakers. The rally speeches were refreshing in their portrayal of activists beyond the usual climate change organizers. Indeed, some of the most powerful words came from First Nations leaders Chief Jacqueline Thomas (Saik’uz First Nation) and Crystal Lameman (Beaver Lake Cree First Nations). Both representatives spoke of the environmental hazards of Tar Sands oil extraction and the injustice inflicted on their land and community by fossil fuel development. Most poignantly, they expressed anger at the Canadian government for continuing to disregard their rights, and hope that the U.S. government will not spur the environmental abuse by signing on to the pipeline.

Bill Mckibben, 350.org founder and activist, crystallized this hope as well as fulfillment: “All I ever wanted was to see a movement to stop climate change. And here it is. You all look beautiful.” As one enormous movement, we took those words and energy into action as 40,000 people shook the cold mud off their feet and flooded onto Constitution Avenue, walking and even dancing toward the White House.  The crowd chanted classics like “The People/ United/ Will Never Be Defeated,” and more playfully “Hey, Obama/ We Don’t Want No Climate Drama.” We marched until the streets were full—until nonviolent activism surrounded the White House to demonstrate exactly how much support Obama has to move Forward on Climate.

With the intoxicating energy at the rally, Cool Foods’ cheeky signs may have seemed incongruous. How can we Keep Calm and Eat Cool Foods amidst the enraging battle against “Big Oil”? But as the 40,000-strong turnout showed, we are fighting climate change with peaceful, persuasive, nonviolent action. And in fact, we can fight climate change every day—3 times a day. The Cool Foods message was one among many corollaries to the “Forward on Climate” mantra. As we urge Obama to say “no” to Keystone XL and “yes” to moving forward with a climate-friendly agenda, we empower citizens at home and abroad to move Forward with Cool Foods.

While the Keystone XL Pipeline is a gargantuan construct, proposed to traverse our heartland transporting the dirtiest of fossil fuels (Tar Sands) from Canada, it is not the true fossil fuel foe. Sadly, the Keystone XL Pipeline is disastrous symptom of our oil-hungry economy, a product of natural resource “exploration” where profit drives the pillaging. But there’s another sector profiting from our Business-As-Usual energy approach: Industrial Agriculture. The Keystone XL Pipeline is headed for Texas’ oil refineries, but its oil and much more fossil fuel goes into our food system. By the time you have steak and potatoes on your plate, rest assured your meal has been marinated in oil. And that’s where Cool Foods comes in.

Choosing foods that are fresh, unprocessed, organic, local, and sustainably raised or harvested, supports an alternative food system—an agriculture that is sowing the seeds for a safe climate, rather than reaping the rewards of oil’s destruction. We must Keep Calm and Eat Cool Foods. Our climate depends on it. On February 17th, 40,000 people in Washington DC alone told President Obama loud and clear: move Forward on Climate; imagine the impact when each one of us sits down for breakfast, lunch, and dinner and chooses to move Forward with Cool Foods.