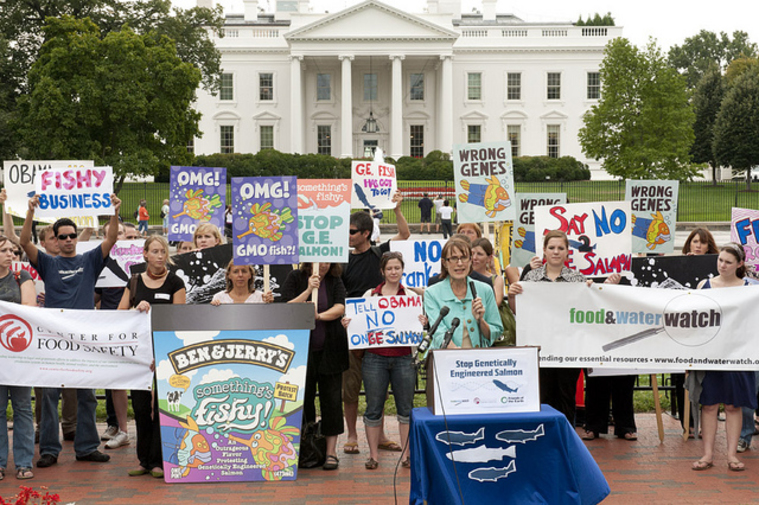 On Thursday, at a press conference and rally outside of the White House, the Center for Food Safety, Food & Water Watch, Friends of the Earth, and the CEO of Ben & Jerry’s demanded the Obama Administration halt FDA approval of the first genetically engineered (GE) food animal. The FDA is expected to decide whether to approve the controversial GE salmon, created by a company called AquaBounty, at a series of hearings this Sunday through Monday.

“The FDA is functioning more as a stock promoter for the biotech industry than a guardian of public health,” said Jaydee Hanson, Senior Policy Analyst at the Center for Food Safety. “Approval of this fish cuts a gaping hole in public safety and seems intended to help the biotech industry raise capital for other GE animals.”

Over 300 environmental, consumer, health, and animal welfareorganizations, along with salmon and fishing groups and associations,food companies, chefs and restaurants signed joint letters to the FDA opposing the approval of AquaBounty’s GE salmon.  As of Thursday, a coalition of groups including the Center for Food Safety, Food & Water Watch, Friends of the Earth, The Organic Consumers Association, Food Democracy Now and CREDO Action, among others, had collected over 160,000 consumer comments to submit to the FDA and President Obama, urging them to reject the approval of genetically engineered salmon. In addition, 14 members of the California State Legislature sent a letter to FDA and President Obama requesting that FDA deny the approval until the full suite of environmental and food safety concerns are addressed.

The groups revealed the environmental and consumer risks that would be introduced by the salmon, as well as their concerns with an approval process that, they say, is designed to limit public knowledge and participation. They disclosed that:

Despite AquaBounty’s claim to produce only sterile fish, up to 5 percent of its GE salmon eggs could be fertile (and could therefore breed with wild populations), prompting the FDA to label its claims  “potentially misleading.”AquaBounty has claimed it has already received orders for 15 million eggs — 750 thousand of which could be fertile.The FDA has no rules requiring that AquaBounty, and the thousands of fish farmers who would receive their product, raise the GE fish on land. Millions of farmed salmon escape into the wild each year. Approximately 6 months ago, 10 thousand escaped from a UK farm due to one hole in a net.            No long-term or independent studies have been conducted to assess the human health risks associated with eating transgenic fish. In assessing the impact of GE salmon on consumers and the environment, the FDA admitted that primary deference was given to studies submitted by AquaBounty Technologies – the company producing the salmon.The principle study the company conducted to test possible allergic reactions involved just six of the GE fish intended for human consumption.At this time, AquaBounty’s financial survival depends on FDA’s approval of GE salmon. The company has invested $50 million in the product, while posting zero sales and almost five million dollars in net losses in 2009.  Its stock price plummeted to near zero in 2008 and only began to rise this summer after FDA announced its plan to approve the fish.

The FDA released what the groups called an insufficient amount of public information for review only ten days before public hearings scheduled to determine whether or not to approve the fish.

Dave Love, PhD, Project Director with Johns Hopkins Center for a Livable Future said, “The results of two non-peer-reviewed, confidential studies and one study nearly 20 years old are not adequate for the public to decide the allergenicity and toxicity of genetically engineered farmed salmon. The three major problems with these existing salmon foods safety studies are their small sample sizes, short durations and low quality.”

“Until more high-quality, long-term studies are performed demonstrating safety for consumers and for the ecosystem, there is not enough information to make an evidence-based decision on whether genetically engineered salmon are safe to consume,” Love said.

“It’s looking like the FDA will approve the salmon in the next few days unless consumers speak out to stop them,” said Wenonah Hauter, Executive Director of Food & Water Watch. “Unfortunately, the FDA has kept the public in the dark about the decision-making process. The clock is ticking, which is why we’re calling on the Obama Administration to halt the process before this science experiment ends up on our plates.”

The decision to approve the salmon could have larger implications for the widespread approval of GE foods. AquaBounty has additional plans to produce GE trout and tilapia. Other companies are currently developing GE pigs and cows.

“The FDA must deny approval of this modified fish to protect the environment, public health, fishing communities, and biodiversity,” said Eric Hoffman, Biotechnology Policy Campaigner with Friends of the Earth.

Ben & Jerry’s announced at the event that it symbolically changed the name of its ‘Phish Food’ ice cream to ‘Something’s Fishy’ to protest the approval of genetically engineered food animals.

The Center for Food Safety is a national, non-profit, membership organization founded in 1997 to protect human health and the environment by curbing the use of harmful food production technologies and by promoting organic and other forms of sustainable agriculture. CFS currently represents over 125,000 members across the nation.

The Center for Food Safety’s Fact Sheet on GE fish is available here; other background and campaign materials available at www.ge-fish.org