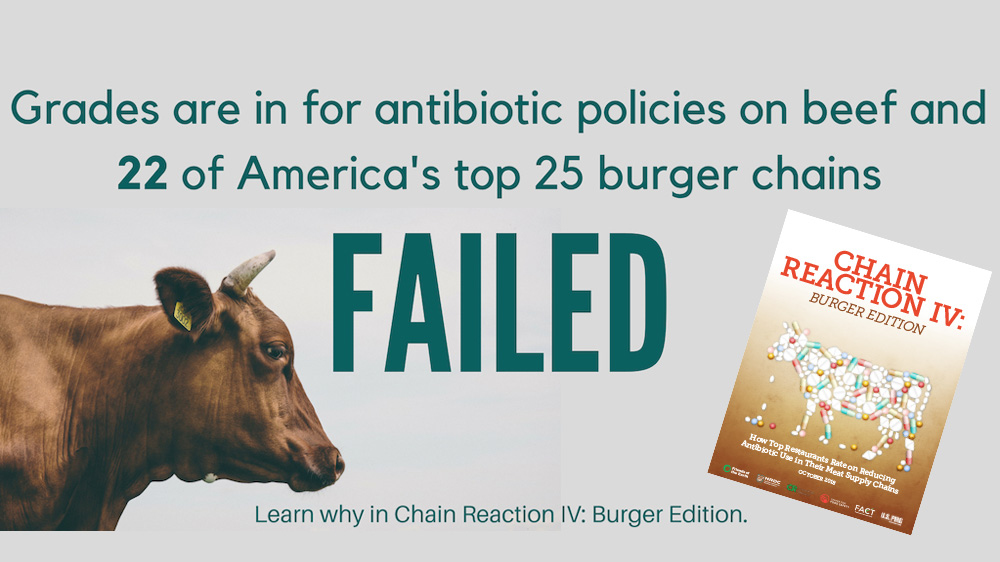 Two growing burger chains, Shake Shack and BurgerFi, stand out from the herd when it comes to serving beef raised without the routine use of antibiotics in the burger industry. They were the only restaurants to earn an "A" on the fourth annual Chain Reaction scorecard released today by six major consumer and environmental organizations. The vast majority of hamburger chains â?? 22 of the top 25, including giants such as McDonald's â?? got an "F" grade because they lack established policies restricting antibiotic use in their beef supply chains.

The fourth annual Chain Reaction scorecard grades the nation's 25 largest hamburger chain restaurants on their antibiotics policies and practices. It spotlights the lack of progress in the beef industry, the largest buyer of medically-important antibiotics among food animal sectors, in addressing antibiotic overuse. Public health experts warn that the widespread use of antibiotics for meat production is rendering these medications less effective by contributing to the creation and spread of drug-resistant bacteria, sometimes known as superbugs.

"There's nothing more American than a hamburger. But for the sake of our health, we need influential restaurants such as McDonald's to take a bite out of antibiotic overuse in the beef industry," said Matt Wellington, U.S. PIRG Education Fund's Antibiotics Program Director. "Restaurants need to demand antibiotic restrictions from their beef suppliers. We simply cannot afford to lose life-saving medicines to produce a slightly cheaper burger."

1. Failing grades for most chains: Twenty-two burger chains received an "F" grade because they lack meaningful policies to govern antibiotic use in their beef supply chains.

2. A new generation leads the way: BurgerFi and Shake Shack received the only two "A" grades in the burger scorecard. Both companies currently serve only beef raised without antibiotics.

3. A baby step by a big company: Wendy's received a "D-" because it buys 15 percent of its beef supply from producers that have reduced the use of one medically important antibiotic, tylosin, by 20 percent. The policy represents progress, yet is far from comprehensive.

4. Don't just take their word for it: Shake Shack and Wendy's, two of the three burger chains with passing grades, got points for using suppliers who have a third party verify their antibiotic use.

5. Intention without follow-through: McDonald's, the largest beef purchaser in the United States, has announced a vision for antibiotic stewardship for its meat supply chain, but hasn't committed to a timeline to implement it beyond chicken. In-N-Out Burger also has publicly pledged to source meat raised without routine antibiotics but it hasn't committed to a timeline either.

"People want better burgers and the companies taking note are seeing better business," said Lena Brook, Acting Director of Food and Agriculture at the Natural Resources Defense Council. "With more of these miracle drugs going to cows than to people, the beef industry has a responsibility â?? and an opportunity â?? to help keep them working when sick people and animals need them. Most fast food restaurants are putting burger lovers in a bind. If they want responsibly raised meat, right now, chicken is the best choice at many mainstream chains."

Approximately 70 percent of the medically-important antibiotics sold in the United States go to food-producing animals. Of medically important antibiotics sales to the livestock sector, 43 percent of the drugs go to the beef industry, more than any other meat sector. Farmers often give these antibiotics to healthy cattle to compensate for stressful, crowded and unsanitary conditions on the industrial feedlots where nearly all cattle spend a portion of their lives.

"Cattle are adapted to graze on pasture. We could eliminate most of the antibiotic use in the cattle sector by keeping cattle on pasture longer and making sure they get enough hay at the feedlot," said Steven Roach, Food Safety Program Director for Food Animal Concerns Trust. "Antibiotics could then be reserved for treating the much fewer sick cattle and not misused to prevent problems caused by how cattle are raised."

Overuse of antibiotics on livestock hastens the spread of antibiotic resistance in bacteria and increases the risk of drug-resistant infections in people. Each year, more than 2 million Americans suffer antibiotic-resistant infections and at least 23,000 die. According to both the World Health Organization and the Centers for Disease Control and Prevention, antibiotic resistant bacteria are among the top threats to global public health.

"When antibiotics stop working, diseases become harder to treat, life-saving surgeries riskier to perform, and a scrape on the knee can even turn deadly," said Jean Halloran, Director of Food Policy Initiatives in the advocacy division of Consumer Reports. "Consumers are concerned about antibiotics losing their effectiveness and want meat producers to adopt more responsible practices."

A 2018 Consumer Reports nationally representative survey of 1,014 adults found that 78 percent of respondents agreed that meat producers should stop giving antibiotics to animals that aren't sick. Fifty-nine percent said they would be more likely to eat at a restaurant that serves meat raised without antibiotics.

"In the absence of federal policy, companies must take action to address their contributions to this crisis," said Kari Hamerschlag, Deputy Director, Food and Agriculture, Friends of the Earth. With so many antibiotics going to cattle, we urge the U.S. beef industry to follow the lead of the chicken industry and take decisive action on this issue. High-profile restaurants, like In-N-Out Burger and McDonald's, must make good on their stated commitments to eliminate or significantly curtail the regular use of these drugs in their supply chain."

"Restaurant policies helped move the chicken industry beyond the federal requirements for antibiotics in food animals, but lack of meaningful action by the beef industry underscores the need for regulations to move the needle forward," says Rebecca Spector, West Coast Director at Center for Food Safety. "If the industry is able to keep dragging its feet, the antibiotics crisis will only worsen."

Chain Reaction III: How Top Restaurants Rate on Reducing Use of Antibiotics in Their Meat Supply