Companies, White House move to reduce antibiotics in meat, but will their actions speak as loud as their words? 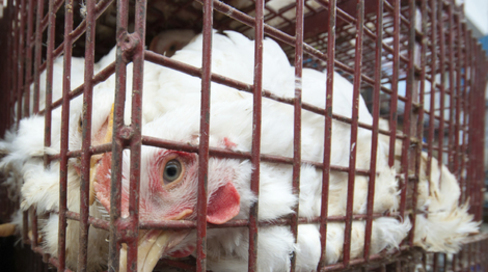 Concern over the decreasing effectiveness of antibiotics to treat human infections and its connection to the overuse of antibiotics in animals raised for food is not new. The U.S. Food and Drug Administration (FDA) expressed fears in the 1970s that misuse of antibiotics in agriculture would lead to increased resistance of harmful foodborne pathogens like Salmonella and E. coli that put consumers at risk. What is new is the increasing recognition among major food companies that something has to change.

The past few months have been marked by a rapid succession of public announcements. Large producers, retailers, and restaurant chains are committing to reducing the use of antibiotics in their chicken supplies by eliminating the common industry practice of providing continuous antibiotics to chickens through their feed for the purposes of promoting growth. An announcement from McDonald’s at the end of March was followed shortly by similar announcements from Pilgrim’s Pride, Tyson’s Foods, Walmart, and most recently Foster Farms. This flurry of activity follows behind announcements in past years from Chick-fil-A, Chipotle, and Perdue. The individual commitments vary in the strength and breadth. Some, like McDonald’s and Tyson’s, set timelines for achieving elimination of antibiotics used for growth promotion, while others, like Foster Farms, expressed a more general commitment. Chick-fil-A has implemented a “No Antibiotics Ever” policy for its chicken suppliers, while most other policies emphasize the responsible or judicious use of antibiotics. However, the announcements all share the same general principle that medically important antibiotics must not be used for growth promotion in chickens.

Progress on the critical issue of routine antibiotic use in our meat and poultry supply is unmistakably positive. However, there is much work to be done, and significant pieces of the puzzle remain unaddressed in recent actions and media coverage. For one, while corporate commitments on chicken are necessary and important due to the incredible numbers of chicken raised and consumed in the U.S., similar initiative for turkeys, pigs, and cows has yet to emerge despite their contribution to the development of antibiotic-resistant bacteria. Second, in the absence of corresponding regulatory action, there is no guarantee that these commitments will stick. Public announcements are just that, and they are reactions to current market trends and consumer concern. Institutionalizing these policies at the federal level is critical to ensuring the commitments are not just window dressing.

Also missing from these announcements is a commitment by the poultry industry to fix its inhumane and unsanitary practices, which must occur simultaneously with a reduction in antibiotic use. Eliminating the use of antibiotics for non-therapeutic purposes is necessary, as are significant improvements to the current living conditions of birds raised for food. Antibiotics have been used as a cost effective tool to prevent diseases from emerging in inhumane conditions that increase the spread of and susceptibility to pathogens. Large poultry production involves overcrowding, infrequent and insufficient cleaning such that birds are living alongside rotting carcasses, blood and manure, and experiencing high stress. These egregious animal welfare violations have persisted because producers relied on antibiotics to keep the birds from getting sick. When one tool is removed, the industry cannot be allowed to replace it with other tools such as alternative controversial pharmaceuticals that maintain the status quo.

The federal government has increased its presence on this issue, but with few tangible or enforceable outcomes. Within the past month, FDA released two highly anticipated rules related to providing antimicrobial drugs to food animals: the proposed changes to reporting requirements for sponsors of antimicrobial animal drugs, and the Veterinary Feed Directive. On June 2, the White House held a forum on antibiotic stewardship, inviting 150 food companies, retailers, and human and animal health groups to discuss “the development, promotion, and implementation of activities to ensure the responsible use of antibiotics.” In conjunction with the forum, the White House released a Presidential Memorandum directing, “Federal departments and agencies to create a preference for meat and poultry produced according to responsible antibiotic-use.” While the White House could have used this forum as a genuine opportunity for policy advancement, invitations were kept secret until the morning of the forum and few public health, consumer, or environmental groups were invited at all. The handful in attendance were prevented from participating in the animal health discussion, which included a veritable who’s-who of livestock and meat associations, food animal producers, and animal drug manufacturers, as well as McDonald’s and Panera Bread. The intentional cultivation of a one-sided conversation on the issue illustrates the Administration’s unwillingness to challenge the food industry.

Despite growing awareness and the beginnings of a market shift, the underlying problems with the meat industry that allowed the abuse of antibiotics to flourish in the first place have yet to change. A disregard for animal welfare and ultimately human health continues to underpin the workings of an industry solely invested in protecting its bottom line. So long as these companies remain in the driver’s seat regarding changes to antibiotics use in meat production, change will be limited and incomplete. To truly protect human health and to develop a safe meat industry, we’ll need more than just proclamations of good intentions; we’ll need mandatory, enforceable policy changes.