By Michele Simon, JD, MPH, Policy Consultant with the Center for Food Safety 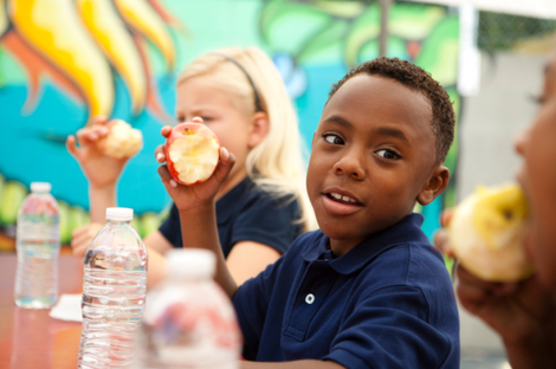 With the passage of the Healthy, Hungry-Free Kids Act of 2010, in addition to improving school meals, Congress required the U.S. Department of Agriculture to update nearly non-existent nutrition standards on so-called competitive foods. These are foods sold outside the school meal program, including fast food items sold alongside the reimbursable lunches, and soft drinks and junk food sold in vending machines, school stores, fundraisers, and the like.

As I wrote about in my book, the issue of unhealthy beverages and junk food in schools has been a contentious one for years, mostly being fought at the state and local levels. While it’s commendable that the federal government is now taking up the issue, I have some serious concerns about the feasibility of an approach that essentially endorses healthier junk food while allowing corporations continued unfettered access to children in schools.

That’s why I have submitted comments on behalf of Center for Food Safety, endorsed by several other organizations and experts, to ask that USDA assist schools with eliminating fast food, vending, and other competitive foods from schools altogether. Below are a few highlights from those comments. (You can read the entire document here.)

Congress’ clear intent with the federally-subsidized school lunch and breakfast programs is to ensure millions of schoolchildren are well-nourished. However, the ongoing presence of competitive food in schools undermines these programs financially. Indeed the very term “competitive” underscores this problem. According to school chef Ann Cooper: “Students should be eating healthy complete meals; the opportunity to opt-out by purchasing competitive food is actually counter to the mission of the National School Lunch Program.”

The presence of so-called “a la carte” items on the school meal line sets up a demographic divide between those who can afford these items and those who cannot. Eliminating any competing school meal items would avoid this stigma, making a more positive eating environment for all schoolchildren. School food expert and sociology professor Janet Poppendieck agrees that unless competitive foods are eliminated entirely, that stigma will persist: “Unless the new rules convince schools to do away with the competitive foods altogether, however, a la carte items and other competitive foods will continue to undermine the National School Lunch Program, because a la carte service stigmatizes the federal lunch.”

USDA’s narrow focus on nutrients such as grams of fat and sugar will still result in highly-processed junk food with only slightly improved nutritional profiles. For example, reduced-fat corn chips and baked potato chips are still junk foods with almost zero nutritional value. Moreover, lower calorie soft drinks such as Diet Coke also offer zero nutrition and have no place in a child’s diet. With UDSA essentially giving such highly processed foods the “government seal of approval,” future efforts to remove such products from schools will become even more challenging. The food industry will very likely point to the federal nutrition standards on competitive foods as the “new normal” in schools, potentially undermining advocates who wish to rid schools of these unhealthy processed products altogether.

Maintaining the presence of fast food, soft drink, and junk food companies in public schools sends all the wrong messages to children. These companies are eager to sell their products in schools because they want to get kids hooked at an early age, to ensure brand loyalty for life. A vending machine that promotes Diet Coke versus Coke exploits children all the same. More important than the nutritional content is the branding messages that these products carry. Food corporations are happy to comply with minor tweaks to their products to ensure their brands remain in schools. With these proposed nutrition guidelines, USDA is helping to secure the inappropriate, exploitative, and harmful role these companies currently have in targeting children, in and out of schools.

To both maximize the economic benefit to schools and as well as protect schoolchildren, USDA should assist and provide resources to help schools that want to eliminate competitive foods, as opposed to simply placing a healthy halo and government seal of approval upon highly-processed and nutritionally-void products from companies seeking only to target children with their brands.

In addition to the Center for Food Safety, the following organizations and individuals signed on to the full comments: