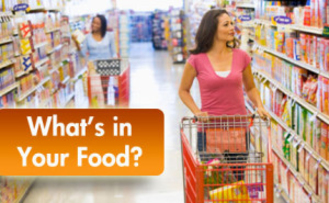 Center for Food Safety (CFS) has been fighting for labeling of genetically engineered (GE) foods and the public’s “right to know” since its inception fifteen years ago. Just as the public has the right to know if food is irradiated or contains high fructose corn syrup, trans-fats or MSG, we have the right to know if it has been altered at the molecular level to contain novel bacteria, viruses or foreign genetic material never seen in foods, as is the case with GE foods.

Food labeling has empowered tens of millions of Americans to take control of what we eat and feed our families for health, economic, environmental, ethical or religious reasons. However, these freedoms are being denied to the more than 90% of Americans who want to know if their food is produced using genetic engineering because these products are not required to be labeled in the U.S. Unlike more than 60 other countries—including the European Union member states, Japan, Brazil, Russia and China—the U.S. has no law requiring labeling of GE foods. As a consequence, U.S. consumers are unknowingly purchasing and consuming GE foods every day, despite the fact that the U.S. Food and Drug Administration (FDA) does no independent testing for their safety.

FDA has not acted to require labeling

Twenty years ago, FDA determined that GE foods did not require labeling because they were not “materially” different from other foods.  In 1992, at the time the first GE crops were being considered for commercialization, FDA restricted what it considered “material” to only changes in food that could be noted by taste, smell or other senses. Since the hidden differences of GE foods can’t be “sensed” in this way, FDA declared them not to have any material difference from non-engineered foods, and, hence, did not require labeling. This policy was set by then FDA Deputy Commissioner for Policy, Michael Taylor, a former Monsanto employee. It was, and remains, a political decision, not a scientific one. In fact, as documents released later through CFS litigation showed, scientists in FDA had significant concerns with the policy.

In the spring of 2000, FDA announced that labeling of GE foods would remain voluntary, even though there was no indication that any company would voluntarily label GE foods. A dozen years later, none have. Companies that have eliminated GE ingredients and use “NON-GE” or “NON-GMO” labels on their products face strict regulations, while the FDA allows companies that do not take this step to continue using GE ingredients in secret. FDA’s archaic policy based on outdated science is unfortunately still in effect today, even though the 21st century has brought fundamental changes to food that cannot be seen through processes such as genetic engineering.

In response, CFS filed a legal petition with FDA in October 2011 detailing the reasons why GE foods should be labeled and demanding the agency take action to require the labeling of these foods. To date more than 1.2 million Americans have submitted comments to FDA in support of CFS’s legal petition. CFS is still awaiting a response from the agency.

Prop 37 is a reasonable response to government inaction

Since FDA has to-date refused to label GE foods, individual states have the duty and the right to take action and require GE food labeling to protect citizen interests, including public health, consumer right to know, the economic interests of farmers, and our agricultural lands and surrounding environment. Prop 37 was initiated from the ground up by individual citizens in response to the failures of the federal government and the California legislature to require labeling of GE foods.

The intention of Prop 37 is simple: it merely requires that foods produced using genetic engineering be labeled as such. The initiative is intended to provide California consumers with information about the foods they purchase, allowing them to make informed choices in the marketplace.

Opponents claim Prop 37 is a costly regulation with no benefits that would impose significant costs on California’s food and agricultural industries and consumers. In fact, the initiative is 100% for the benefit of California consumers, giving everyone equal access to information currently hidden about the foods they purchase. Food processors and manufacturers have 21 months before implementation – ample time to find non-GE sources of ingredients such as corn and soy if they do not want to make public that their products contain GE ingredients. Or companies can merely choose to label their products as “may be partially produced with genetic engineering” if they do not want to track the ingredients in their food (a low-cost option). This is also sufficient time for farmers to plant non-GE crops depending on the needs of the processors they supply. More generally, as a standard part of production costs, manufacturers frequently change their labels. And, overall, there is absolutely no reason why Prop 37 would cause an increase in food prices since non-GE products are no more expensive than products containing GE ingredients, with the exception of organic foods which currently make up less than 5 percent of the marketplace.

Prop 37 is a healthy solution for California agriculture

Prop 37 also will not result in significant costs to farm workers and the environment. Instead it will benefit the environment by allowing consumers the choice to buy products from more sustainable food production systems. Opponents allege that GE crops use less herbicide when, in fact, the exact opposite is true. According to data from the U.S. Department of Agriculture (USDA), since the introduction of GE crops more than 100 million pounds of additional herbicides have been used on U.S. farms.

The reason for this is simple: the vast majority of GE crops are designed for one purpose—to be resistant to herbicides, such as Monsanto’s “Roundup.” This resistance allows farmers to repeatedly spray more and more herbicide on crops without risk of damaging or killing them.  With the widespread commercialization of GE crops in U.S. agriculture, Roundup has now become the most applied pesticide in the world. And the result? Weeds in our agricultural fields, like antibiotics, have mutated due to overreliance. These Roundup-resistant “superweeds” are an epidemic, forcing farmers to resort to even more toxic herbicides. Accordingly, these pesticide-promoting GE crops only lead to more herbicide use, causing damage to our agricultural areas and to our drinking water, and posing health risks to farm workers, wildlife and consumers. Contrary to the pro-chemical “No on 37” group, CFS believes Californians deserve the choice to avoid purchasing foods produced in such an unsustainable manner.

Since the FDA does absolutely no independent testing and does not make any safety assessment of GE foods, Californians have good reason to be concerned about the potential health effects of these novel foods. And now there is new scientific support to back up their concerns about the health effects of GE foods. A new long-term, peer-reviewed study published online in the journal Food and Chemical Toxicology shows that consuming even relatively low levels of the commercial Roundup-tolerant GE corn or of the herbicide Roundup can result in greatly increased levels of mammary tumors, kidney and liver damage, and premature death. As expected, industry front groups and pro-chemical interests have immediately gone to the media in an effort to marginalize the study since its release. Given the validity and meaning of the study results, it comes as no surprise that false information, manufactured opinions and threats to discredit have entered the picture.

Prop 37 is fair to farmers and consumers

Another fallacy being purported about Prop 37 is the alleged high costs of compliance for farmers and food processors. The initiative requires an affidavit from the farmer or processor that the crop or product was not genetically engineered. This requirement, however, is far from unusual: farmers and suppliers are required to keep track of all kinds of information, including where their seed comes from, what pesticides are used on their crops and what food safety procedures have been used (a much more arduous process). Keeping track of how our food is produced is a standard safety requirement that should be practiced by all farmers and food processors. It’s one of the only ways we have to trace foodborne illness outbreaks, pesticide use or to recall contaminated materials. The question isn’t whether or not to make this a part of a new regulatory environment for food in California—it’s why is it not in place already?

Finally, perhaps the most egregious lie about Prop 37 is that it will eliminate the use of the term “natural” on all food products. Not so. The intent of the initiative is clear—only products that are GE cannot be labeled natural. It’s as simple as that. Processed foods that are not GE, such as milk, butter, dried fruits and nuts are not restricted from using the label “natural.” This myth is being promulgated in various media outlets and is one of the biggest misconceptions about the initiative.

Prop 37 is progress for the future of food, not a retreat

Labeling of GE foods is not an effort to shut down the advance of science and technology. Rather, Prop 37 represents the culmination of an effort aimed at offering the public full disclosure, preserving the right of free choice in the marketplace and creating a better food industry. Requiring GE foods to be labeled should have no adverse impact on a company’s ability to conduct new, forward-thinking research. In fact, if future GE products claim to offer consumer benefits, such as increased nutrition, clear and complete labeling offers these companies an opportunity to distinguish these products from others in the marketplace.

In America, and especially here in California, we pride ourselves on the fact that we live in a society that offers us choices and the guaranteed right to guide our own lives. Making informed decisions about the health and safety of the food we eat and feed our families is one of these rights. Under current FDA regulation, we don’t have this choice when it comes to GE foods, unlike most of the world. Since the U.S. federal government has refused to label GE foods, it is up to individual states to lead the way and protect our states’ interests, including public health, consumer right to know and our farmers, environment and agricultural lands. Prop 37 is a step toward making these protections a reality.