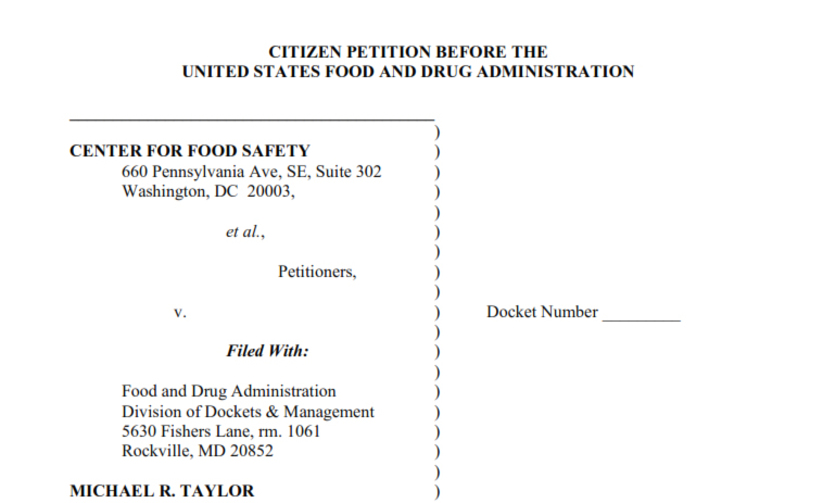 Current guidelines are “misleading” and deny consumers their “right to know”

Today, the Center for Food Safety (CFS) announced its filing of a groundbreaking new legal petition with the U.S. Food and Drug Administration (FDA) demanding that the agency require the labeling of all food produced using genetic engineering. CFS prepared the legal action on behalf of the Just Label It campaign; a number of health, consumer, environmental, farming organizations, and food companies are also signatories.

“FDA’s current policy uses 19th century rationale for a 21st century issue, leaving consumers in the dark to hidden changes to their food,” said Andrew Kimbrell, executive director for the Center for Food Safety. “It is long overdue that FDA acknowledge the myriad reasons genetically engineered (GE) foods should be labeled and label these novel foods once and for all.”

In 1992, the FDA issued a policy statement that GE foods were not “materially” different – and thus did not need to be labeled. The agency severely constricted what it called “material,” limiting it to the ability of a change to be tasted, smelled, or known through the other senses. After almost 20 years, this policy is unfortunately still in effect today.

CFS’s legal petition identifies a number of scientific and legal grounds requiring GE foods be labeled. Most importantly, the current lack of any labeling makes GE foods misleading, in violation of FDA’s duties under the Federal Food, Drug, and Cosmetic Act. GE foods’ differences from conventional foods are underscored by the fact that they are patented for their novelty, yet they remain unlabeled. GE crops have also shown they carry with them significant novel environmental harms, such as transgenic contamination of natural crops and the wild, and massive increases in pesticide use. These differences should mandate labeling.

Unlike time-tested conventional food varieties, which have had centuries to manifest long-term health impacts, the scientific community is still uncovering new and significant information about the human health and environmental impacts of GE foods. FDA also does not do any independent testing of GE foods; in the U.S., food safety oversight is limited to a voluntary consultation with industry. Safety is based on the confidential industry data.

“There have been very few independent, comprehensive studies of their long-term human health and environmental impacts of GE foods,” said Dr. Michael Hansen, senior staff scientist at Consumers Union, nonprofit publisher of Consumer Reports. “Labeling is the first step to allow consumers to the right to know what is in their food and make informed decisions about what they eat.”

Polls consistently show that more than 90 percent of Americans want GE foods to be labeled. Unlike the U.S., the majority of other countries worldwide require some level of GE food labeling.

The Center for Food Safety filed the petition on behalf of the Just Label It campaign (www.justlabelit.org), a coalition of more than 350 companies, organizations, scientists, doctors and individuals dedicated to food safety and consumer rights.

With the submission of this petition, FDA must open a public docket where citizens can write in their support for the petition, requesting the agency label GE foods. Citizens can submit comments in support of the legal petition here.

The Center for Food Safety is a national, non-profit, membership organization founded in 1997 to protect human health and the environment by curbing the use of harmful food production technologies and by promoting organic and other forms of sustainable agriculture. CFS currently represents nearly 200,000 members across the nation. On the web at: www.centerforfoodsafety.org
and www.truefoodnow.org