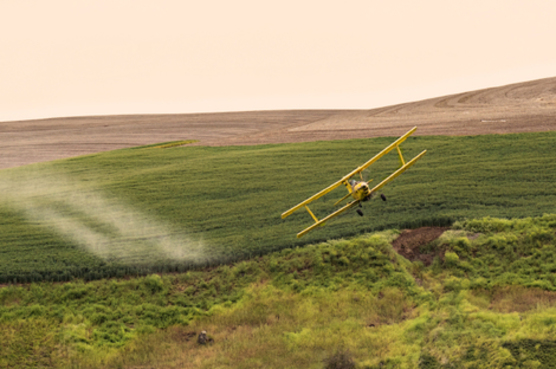 Over 150 groups and more than 365,000 citizens from across the country are urging the U.S. Department of Agriculture (USDA) to reject a Dow Chemical application seeking approval of a controversial genetically engineered (GE) corn that is resistant to the hazardous herbicide 2,4-D. In addition to the public comments, 154 farm, environmental, health, fisheries groups and companies will submit a letter to USDA Secretary Tom Vilsack expressing their overwhelming opposition to this crop. The comments and letter will be submitted when USDA’s public comment period ends this Friday, April 27.

“American agriculture stands at a crossroads. One path leads to more intensive use of old and toxic pesticides, litigious disputes in farm country over drift-related crop injury, less crop diversity, increasingly intractable weeds, and sharply rising farmer production costs,” said Andrew Kimbrell, Executive Director of the Center for Food Safety. “This is the path American agriculture will take with approval of Dow’s 2,4-D resistant corn, soybeans and the host of other new herbicide-resistant crops in the pipeline. Another path is possible, but embarking upon it will take enlightened leadership from USDA.”

According to agricultural scientist Dr. Charles Benbrook, widespread planting of 2,4-D resistant corn could trigger as much as a 30-fold increase in 2,4-D use on corn by the end of the decade, given 2,4-D’s limited use on corn at present. Overall 2,4-D use in American agriculture would rise from 27 million lbs. today to over 100 million lbs. 2,4-D soybeans and cotton would boost usage still more. Yet USDA has provided no analysis of the serious harm to human health, the environment or neighboring farms that would result.

“It’s clear that this new generation of GE herbicide-resistant seeds is the growth engine of the pesticide industry’s sales and marketing strategy,” said Marcia Ishii-Eiteman, Senior Scientist at Pesticide Action Network. “These seeds are part of a technology package explicitly designed to facilitate increased, indiscriminate herbicide use and pump up chemical sales.”

In addition, 48 medical and public health professionals have signed a letter to USDA warning of the severe health harms that would likely accompany the massive increase in 2,4-D use, expected to accompany approval of the GE seed. “Many studies show that 2,4 D exposure is associated with various forms of cancer, Parkinson’s Disease, nerve damage, hormone disruption and birth defects,” said Wenonah Hauter, Executive Director of Food & Water Watch. “USDA must take these significant risks seriously and reject approval of this crop.”

American farmers are also rightly concerned that the introduction of 2,4-D resistant corn will threaten their crops. 2,4-D drift is responsible for more episodes of crop injury than any other herbicide. Last week, a coalition representing more than 2,000 farmers and groups filed petitions with the USDA and the EPA, asking USDA to conduct a thorough environmental review before making a decision on approving 2,4-D resistant corn and EPA to convene an advisory panel to examine impacts from increased application of the herbicides.

“Farmers are on the front lines of this potential chemical disaster,” said Iowa conventional corn and soybean farmer George Naylor. “Conventional farmers stand to lose crops while organic farmers will lose both crops and certification, resulting in an economic unraveling of already-stressed rural communities. I’m also very concerned about the further pollution of the air and water in my community.”

“USDA must stand up for those growing America’s food and put their interests, and the public’s, ahead of chemical companies’ profits,” added Margot McMillen, an organic farmer in Missouri. Hers is the message of farmers who are speaking on this issue today at a national telepress conference organized by the National Family Farm Coalition.

Though Dow claims 2,4-D crops are the solution to weed resistance a recent peer-reviewed study published in the prestigious journal Bioscience concludes that these new GE crops will pour oil on the fire.  The study, entitled “Navigating a Critical Juncture for Sustainable Weed Management,” suggests new GE crops will trigger an outbreak of still more intractable weeds resistant to both glyphosate and 2,4-D.

2,4-D drift and runoff also pose serious risk for environmental harm.  The U.S. Environmental Protection Agency (EPA) and the National Marine Fisheries Service have found that 2,4-D is likely having adverse impacts on several endangered species, including the California red-legged frog, the Alameda whipsnake, and Pacific salmon, via impacts on their habitats and prey.

“EPA recently denied our petition to ban or control 2,4-D, putting their head in the sand instead of protecting people and plants,” said Mae Wu, a health attorney at the Natural Resources Defense Council (NRDC). “If USDA now grants Dow’s application, farmers, gardeners, wildlife, and kids will all face even greater exposure to this toxic herbicide.”

If approved, the Center for Food Safety has vowed to challenge USDA’s decision in court, as this novel GE crop provides no public benefit and will only cause serious harm to human health, the environment, and threaten American farms.

The Center for Food Safety is a national, non-profit, membership organization founded in 1997 to protect human health and the environment by curbing the use of harmful food production technologies and by promoting organic and other forms of sustainable agriculture. More information can be found at www.centerforfoodsafety.org

Pesticide Action Network North America (PAN North America, or PANNA) works to replace the use of hazardous pesticides with ecologically sound and socially just alternatives. As one of five PAN Regional Centers worldwide, we link local and international consumer, labor, health, environment and agriculture groups into an international citizens’ action network. This network challenges the global proliferation of pesticides, defends basic rights to health and environmental quality, and works to ensure the transition to a just and viable society. More information can be found at www.panna.org

Food & Water Watch works to ensure the food, water and fish we consume is safe, accessible and sustainable. So we can all enjoy and trust in what we eat and drink, we help people take charge of where their food comes from, keep clean, affordable, public tap water flowing freely to our homes, protect the environmental quality of oceans, force government to do its job protecting citizens, and educate about the importance of keeping shared resources under public control. On the web at www.foodandwaterwatch.org

The Natural Resources Defense Council’s purpose is to safeguard the Earth: its people, its plants and animals and the natural systems on which all life depends. We work to restore the integrity of the elements that sustain life — air, land and water — and to defend endangered natural places. We seek to establish sustainability and good stewardship of the Earth as central ethical imperatives of human society. NRDC affirms the integral place of human beings in the environment. We strive to protect nature in ways that advance the long-term welfare of present and future generations. We work to foster the fundamental right of all people to have a voice in decisions that affect their environment. We seek to break down the pattern of disproportionate environmental burdens borne by people of color and others who face social or economic inequities. Ultimately, NRDC strives to help create a new way of life for humankind, one that can be sustained indefinitely without fouling or depleting the resources that support all life on Earth. On the web at www.nrdc.org