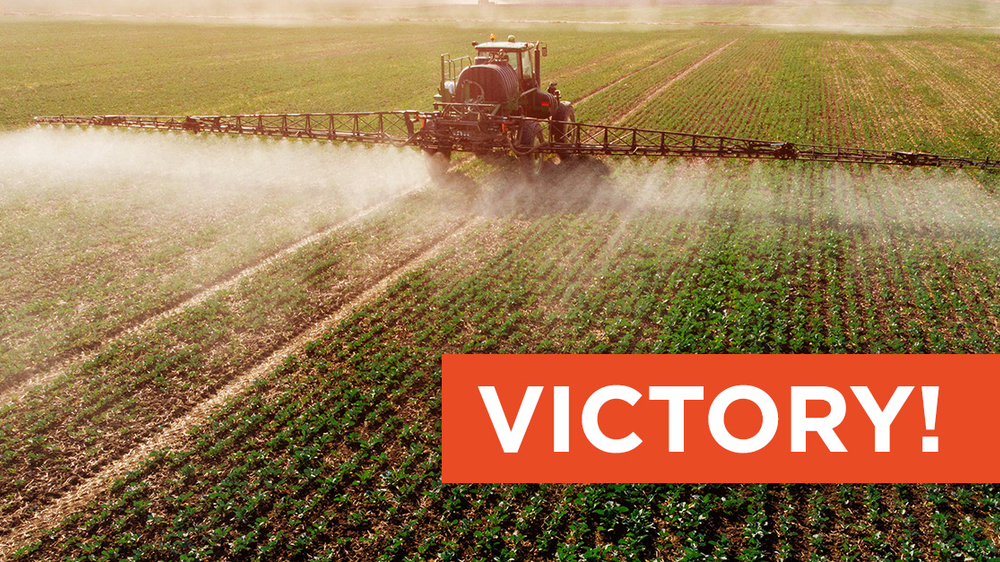 SACRAMENTO, Calif. – In a major victory for health and environmental groups, a California court has ruled (see here and here) that a sweeping state pesticide spraying program is unlawful. The court found the program failed to adequately study and minimize public health threats from pesticides and failed to properly inform the public about the risks of spraying.

The ruling is the result of a lawsuit brought by the City of Berkeley and 11 public- health, conservation and food-safety organizations, including the Center for Food Safety.

The Superior Court of California – County of Sacramento May 19 ruling scraps a programmatic environmental impact report, or PEIR, that allowed California's Department of Food and Agriculture, or CDFA, to spray pesticides wherever and whenever it wanted. The ruling also halts all CDFA chemical pest management activities under the authority of the report.

The law requires all state and local agencies to study and disclose the significant ways projects like pesticide spray programs may affect the environment and the public, and to identify ways to lessen or eliminate those potential threats.

"This court ruling stopping indiscriminate pesticide spraying by the state is a huge victory for public health, the environment and species impacted by toxic pesticides,"said Rebecca Spector, West Coast director at the Center for Food Safety. "The state must prioritize providing more resources to help farmers transition to practices that reduce the need for pesticides and instead promote ecologically based farming practices that protect people and the Earth," Spector said.

"The court was right to rule against the Department of Food and Agriculture's outrageous effort to keep the public in the dark about how and when it plans to spray toxic pesticides and to downplay the risks these chemicals pose to pollinators, the environment and the health of those who live near farm fields," said Bill Allayaud, California director of government affairs for the Environmental Working Group.

The Superior Court decision was issued because of a 2021 appellate court ruling that highlighted many instances where the CDFA had evaded its duty.

The department was required to study and disclose the environmental and health threats of more than 75 pesticides it proposed using indefinitely across California's widely varying geography and ecosystems, but it didn't conduct any of the required analysis of the impacts in specific locations. The appeals court had sent the case back to the Superior Court to issue a final decision consistent with the appeals court's ruling.

"The court made the right decision to throw out CDFA's plan to cement into place for the indefinite future the agency's 'spray now, ask questions later' approach to pest management, which would have perpetuated the existing situation, in which Californians learn their yards or neighborhoods are to be sprayed only when the treatments are about to happen and have little or no recourse to stop the use of pesticides," said Nan Wishner of the California Environmental Health Initiative.

The spraying program and the CDFA's defense of it in court cost the agency at least $5 million, including the cost of preparing the failed report and paying plaintiffs' legal costs, money that could have been better spent securing public health measures and initiating no-spray alternatives.

The department now has 60 days to comply with the court's order.

"It is our hope that this court decision moves the CDFA to join the state's movement toward sustainable pest management, as represented by the governor's Sustainable Agriculture budget initiative and the state Department of Pesticide Regulation's Sustainable Pest Management Work Group," said EWG's Allayaud.

The CDFA statewide pest management program that was the subject of the litigation used pesticides – on private residential property, public property, and agricultural and wild lands – that are known to cause cancer and birth defects and to be highly toxic to bees, butterflies, fish and birds. Those pesticides included:
• Neonicotinoid pesticides that are highly toxic to pollinators like bees and aquatic
invertebrates like crustaceans and mollusks
• The toxic fumigant methyl bromide, which depletes the protective ozone layer
• The chemical warfare agent chloropicrin, which causes genetic damage

The plaintiffs were represented by Sheppard, Mullin, Richter and Hampton, along with Aqua Terra Aeris Law Group.