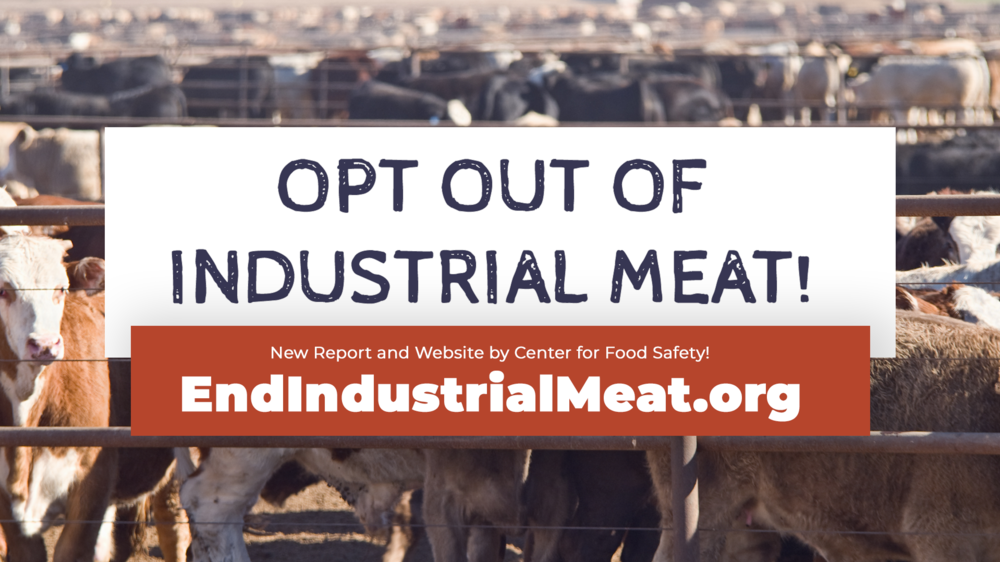 Food animal production is responsible for 18 percent of global greenhouse gas production and 7 percent of greenhouse gas emissions in the United States. In creating these new resources, CFS aims to disrupt the dominance of factory farmed meat by connecting consumers with humane, eco-friendly meat producers and by encouraging them to add more plant-based sources of protein to their diets. With sections including "Ten Reasons to Opt Out," and "How to Opt Out of Industrial Meat," EndIndustrialMeat.org outlines the "why's" and "how's" of keeping factory-raised meat and poultry off your plate. As 37 percent of methane emissions come from grain-fed animals, the site also has a section profiling farmers and ranchers that are producing sustainably and humanely raised meats from grass-fed animals.

"More than 95 percent of food animals are raised in a factory, so unless you're actively sourcing alternatives, odds are extremely high that the meat and poultry you're eating came from a CAFO," said Cameron Harsh, organic and animal programs director at Center for Food Safety. "EndIndustrialMeat.org helps consumers find meat from humane, ecological farmers and offers several strategies to incorporate those food choices into any lifestyle."

Industrial beef systems produce 250 times more greenhouse gas emissions than legumes, so EndIndustrialMeat.org urges consumers to pledge to replace half the meat they used to eat with plant proteins such as beans, lentils, peas, chickpeas, nuts, seeds, and quinoa in addition to smaller amounts of humane, sustainably-produced meat. This strategy helps to keep food budgets balanced by offsetting the higher price of sustainably-produced meat with increased consumption of plant-based proteins that tend to be lower in cost than even conventionally-raised meats.

Industrial meat and poultry production have significant costs despite their lower prices, including detrimental impacts on personal health, natural resources, wildlife, animals, climate, the economy, community health, farmers, and food workers. Conventionally raised meat consumption increases the prevalence of antibiotic-resistant bacteria on meats and in the environment; leads to a higher rate of trauma-related injuries for workers; tortures animals by raising them in cruel, painful environments; and emits toxic air pollutants. Animal factory operators rely on intensive production of soy and grains like corn to feed confined livestock, which consumes large amounts of fossil fuel and depletes soils. The synthetic fertilizers used for livestock feed crops contribute 65 percent of nitrous oxide and 30 million tons of ammonia annually. Monocultures of corn and soybeans also hinder soil's ability to sequester carbon from the atmosphere, which could otherwise capture 5-15 percent of the yearly global fossil fuel emissions.

Conversely, if everyone in the U.S. went without meat for even a single day, it would prevent 1.2 million tons of carbon dioxide from being emitted through greenhouse gasesâ€”the same amount of greenhouse gases that are emitted by France.

For years, CFS has advocated for policies that establish baseline standards for food safety, animal welfare, and waste management and has employed legal, grassroots, and policy strategies to hold producers for failing to meet those standards. EndIndustrialMeat.org aims to build on this work by supporting the growth of alternative producers that meet a high bar of welfare and environmental stewardship. The website also features CFS' online petitions which make it easy for consumers to write companies and regulatory agencies to support more eco-friendly, equitable food production practices and policies.