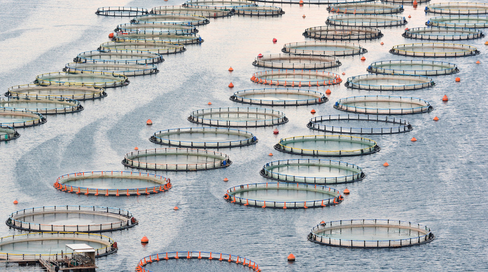 New Orleans, LA (September 25, 2017) - A lawsuit filed by Center for Food Safety (CFS) on behalf of a coalition of consumer, environmental, fishing and farming organizations is now moving forward, challenging the legality of a federal government rule allowing industrial fish farming in the Gulf of Mexico. The groups filed new legal documents demonstrating that the National Oceanic and Atmospheric Administration and its sub-agency the National Marine Fisheries Service, violated a suite of federal laws including the Magnuson-Stevens Fishery Conservation and Management Act, the Endangered Species Act, the National Environmental Policy Act, and the Administrative Procedure Act.

“Industrial aquaculture will harm Gulf fishing communities and ocean ecosystems,” said Sylvia Wu, CFS staff attorney and lead counsel in the case. “The Trump Administration is violating our core fisheries and environmental laws in attempting to set up this unprecedented industrial activity in our ocean waters.”

Marianne Cufone, long-time fisheries expert, environmental attorney and executive director of the Recirculating Farms Coalition (RFC), one of the plaintiff organizations, said, “The government agencies overstepped their powers to create this law, and that sets a very concerning precedent for similar future abuse of powers, all around the U.S.”

While only the Gulf of Mexico is affected by this particular regulation right now, the federal agencies hope that this law-making process will be replicated in other parts of the country to allow industrial fish farms elsewhere.

One critical issue in the case is whether the act of farming fish fits under the definition of “fishing”.  The federal agencies contend it does, and thus are using an existing law that was created to conserve and manage wild fisheries to allow this new and fundamentally different activity, farming fish commercially, as “fishing.” Notably, this questionable and unprecedented extension of the law occurred after Congress refused for years to pass a new law allowing the agencies to permit fish farming in U.S. waters. Only if fish farming can be legally considered fishing under existing law do these government agencies currently have the power to allow and manage aquaculture.

“It is such a shame to even have to file this lawsuit, as clearly Congress never intended to give the authority to the federal government to create a massive unprecedented permitting scheme for factory fish farms in federal waters,” said Wenonah Hauter, Food & Water Watch Executive Director, another of the plaintiff organizations.  “But, by bringing this challenge, we hope to end what is simply a giveaway of our public resources to another polluting industry.”

The new filings are notably significant, as the entire case could be won or lost on the information just submitted. The next likely steps in the suit are for the government to respond to the arguments made by the groups regarding why the government should not make this rule allowing fish farming in the Gulf of Mexico, and then for the judge to render a decision.

About Center for Food Safety: Center for Food Safety’s mission is to empower people, support farmers, and protect the earth from the harmful impacts of industrial agriculture. Through groundbreaking legal, scientific, and grassroots action, we protect and promote your right to safe food and the environment. Please join our more than 900,000 advocates across the country at www.centerforfoodsafety.org. Twitter: @CFSTrueFood, @CFS_Press

About Food & Water Watch: the organization champions healthy food and clean water for all. We stand up to corporations that put profits before people and advocate for a democracy that improves people’s lives and protects our environment. www.foodandwaterwatch.org