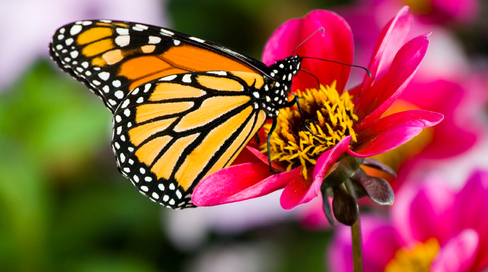 WASHINGTON— Two environmental groups filed a notice of intent to sue the U.S. Fish and Wildlife Service today over its failure to protect the monarch butterfly under the Endangered Species Act. The Center for Biological Diversity and Center for Food Safety petitioned for the monarch’s protection in August 2014, following a more than 80 percent decline in the butterfly’s population over the past two decades. In December 2014 the agency issued an initial positive decision on the petition and launched an official review of the butterfly’s status. The agency is now more than one year late in issuing a legally required “12-month finding” that will determine whether to protect the charismatic large and orange and black butterfly under the Act.

“Endangered Species Act protection will provide a scientific and legal blueprint for the comprehensive protection that the monarch so direly needs,” said George Kimbrell, a senior attorney at Center for Food Safety. “It’s imperative that we protect monarchs now, before it’s too late.”

“The threats to the monarch are so large in scale that the butterfly needs the effective protection of the Endangered Species Act if we’re really serious about saving this amazing migrating wonder for future generations,” said Tierra Curry, a senior scientist at the Center for Biological Diversity.

The population has declined from a recorded high of approximately 1 billion butterflies in the mid-1990s to only 56.5 million butterflies last winter, the second lowest number ever recorded. The overall population shows a steep decline of 82 percent from the 20-year average. The population is expected to undergo a sizable rebound this winter due to favorable spring and summer weather, but monarchs need a very large population size to be resilient to threats from severe weather events. A single winter storm in 2002 killed an estimated 500 million monarchs — eight times the size of the entire current population. Severe weather is expected to take a toll on the population later this winter due to the strong El Niño this year.

Although the Fish and Wildlife Service has announced that it will provide a total of $3.2 million to support monarch conservation projects, that total falls far short of the funding that would be required by Endangered Species Act protection to restore enough monarch habitat to ensure the butterfly’s future.

“The money the government has pledged sounds like a lot, but the truth is it isn’t even enough to restore 1 percent of the habitat that’s been lost,” said Curry. “We’re at risk of losing an animal that’s as American as apple pie, and nothing short of Endangered Species Act protection will guarantee that we save the monarch.”

“Despite the expected increase in the overwintering monarch population this year due to favorable weather, the monarch is still severely jeopardized by milkweed loss in its summer breeding grounds due to increasing herbicide use on genetically engineered crops,” said Kimbrell. “We will continue to do everything we can to ensure monarchs are protected under the Endangered Species Act.”

The butterfly’s dramatic decline has been driven in large part by the widespread planting of genetically engineered crops in the Midwest, where most monarchs are born. The vast majority of genetically engineered crops are made to be resistant to Monsanto’s Roundup herbicide, a potent killer of milkweed, the monarch caterpillar’s only food. The dramatic surge in Roundup use with Roundup Ready crops has virtually wiped out milkweed plants in midwestern corn and soybean fields. It is estimated that in the past 20 years these once-common, iconic orange-and-black butterflies may have lost more than 165 million acres of habitat — an area about the size of Texas — including nearly a third of their summer breeding grounds.

In addition to herbicide use with genetically engineered crops, monarchs are also threatened by global climate change, drought and heat waves, other pesticides, urban sprawl and logging on their Mexican wintering grounds. The Mexican government reported this month that 24 acres of the monarch’s key overwintering grounds were illegally logged this year.

Found throughout the United States during summer months, most monarchs from east of the Rockies winter in the mountains of central Mexico, where they form tight clusters on trees. Scientists from World Wildlife Fund Mexico estimate the population size by counting the number of hectares of trees covered by monarchs.

In response to the initial positive finding the Service issued on the groups’ petition, more than half a million comments have been submitted to the agency in support of Endangered Species Act protection for the butterfly. More than 40 leading monarch scientists and ecologists and more than 200 organizations and businesses sent letters to the agency urging federal protection for the monarch last year.

To allay concerns that protection for monarchs would prevent monarch lovers from interacting with the species, the petitioners requested that if the monarch is protected as a “threatened” species, that the Service enact a special rule that would still allow households and classrooms to collect wild caterpillars and rear them through metamorphosis.

The Center for Biological Diversity is a national, nonprofit conservation organization with more than 900,000 members and online activists dedicated to the protection of endangered species and wild places.