Costco will not sell GMO salmon 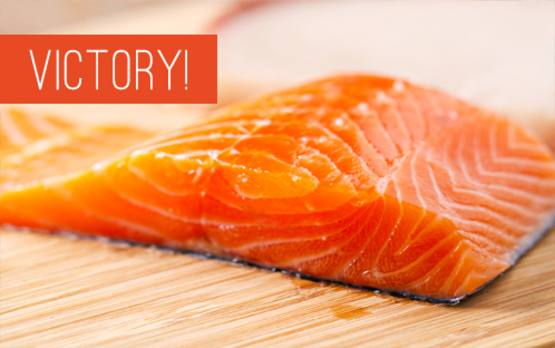 WASHINGTON, D.C. – On the heels of FDA’s approval of GMO salmon, the third largest retailer in the U.S., Costco Wholesale (COST), has made a public commitment to not sell GMO salmon.  Friends of the Earth and a coalition of more than 30 consumer, health, food safety and fishing groups released the retailer’s statement today.

Costco, the second largest retailer in the world, with 487 stores, and one of the largest retailers of salmon and seafood in the U.S., joins more than 60 other supermarket chains including Kroger (NYSE: KR), Safeway (NYSE: SWY), Trader Joe’s and Whole Foods (NASDAQ: WFM), now totaling more than 9,500 stores nationwide, in making a commitment to not sell GMO salmon.

Walmart (NYSE: WMT), the world’s largest retailer, and Publix are among the last remaining large retail grocers in the U.S. that have not yet rejected GMO salmon.

Also last Friday, Red Lobster, with 705 North American locations and more than 40 internationally, told the Dallas Morning News that it would not sell GMO salmon.

“The market is rejecting GMO salmon. Stores won’t sell it and people don’t want to eat it,” said Dana Perls, food and technology policy campaigner with Friends of the Earth. “Now other retailers like Walmart and restaurants need to follow suit, and we need mandatory GMO labeling so that consumers know how to avoid GMO salmon.”

Friends of the Earth and the coalition are calling upon the Senate to stand firm against an industry bill that would deny Americans the right to know about GMOs in our food. The fight for GMO labeling is now heading to the U.S. Senate, where industry groups are furiously pushing for a Senate companion bill to HR 1599, the DARK Act (Denying Americans the Right to Know) passed by the House of Representatives last summer. The bill would make it illegal for states to require labeling of genetically engineered foods. It is also possible that bill supporters may try to attach its provisions as a rider to upcoming appropriations legislation.

Some members of Congress have proposed the use of QR codes, which require smartphones, as a “compromise” solution to demands for mandatory GMO labeling. According to Jaydee Hanson, senior policy analyst at Center for Food Safety, “QR codes are an unworkable, discriminatory substitute for clear, universally accessible labels. This GMO salmon is the first of its kind; the American public has every right to be wary and to want clear, on-package labeling.”

Nearly two million people — including scientists, fishermen, business owners and consumers — who submitted comments to FDA opposed the approval of genetically engineered salmon due to the risks it poses to human health, environment and wild salmon populations.

"By agreeing to not sell GMO salmon, Costco showed that it heard the concerns of Northwest consumers loud and clear,” stated Heather Day, Executive Director of Seattle-based Community Alliance for Global Justice. "Salmon is too important for our diets, economy and cultural heritage to accept anything made in a lab — we want the real deal and applaud Costco for ensuring its customers that’s what they’ll get when they shop there.”

“People have a right to know if the fish they are eating and feeding their children is genetically engineered with the DNA of an eel-like ocean pout to continuously pump out growth hormones,” continued Perls. “Friends of the Earth will be closely monitoring the market. In the absence of labeling, we will continue to push retailers to not sell this risky fish and plan to test salmon and notify consumers directly if stores attempt to hide GMO salmon under false marketing.”

Grocery stores, restaurants and chefs can add their name to the Pledge for GE-Free Seafood by visiting HERE.