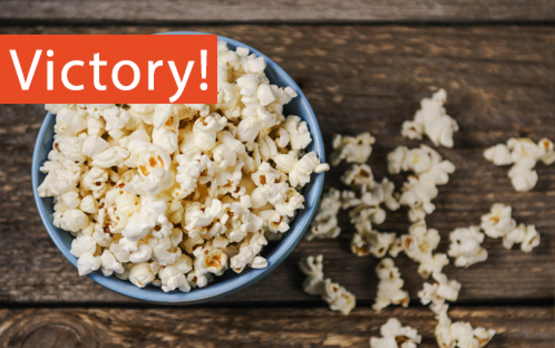 Just a week after the launch of a CFS campaign, the popcorn giant has made a precedent setting commitment to phase out bee-toxic seed coatings

WASHINGTON, DC (October 22, 2015)—Center for Food Safety (CFS) today congratulated Pop Weaver, the second largest popcorn supplier in the country, for taking a bold step towards removing bee-toxic insecticides from their popcorn supply. Just this month, CFS launched a campaign urging the company to phase out the use of neonicotinoid seed coatings. In an announcement yesterday on their website and Facebook page, Pop Weaver committed to “removing 50% of its neonicotinoids usage in 2016, 75% in 2017, with a long-term commitment of further reducing usage by working with agricultural universities and those companies supplying neonicotinoids to the seed industry.” This is the first U.S. food company to commit to phasing out uses of neonicotinoid seed coatings. CFS’s campaign also targeted Pop Secret, which sources much of its popcorn from Pop Weaver, and is working to secure a similar commitment from the company.

“We are pleased to see a leader in the popcorn industry make this commitment to protecting bees and the environment,” said Larissa Walker, pollinator program director at Center for Food Safety. “With a large share of the market, Pop Weaver has the ability to not only become leaders in pollinator protection but to also influence their competitors in the popcorn seed market to do the same. This is a very important market shift.”

Details of Pop Weaver’s phase-out plan have yet to be released. “We have offered to work with Pop Weaver and other popcorn companies to effectively reach these benchmarks and ultimately phase out the use of bee-toxic seed coatings all together,” said Walker.

There are roughly 40 insecticides currently registered for use as an active chemical on popcorn, including 3 bee-toxic neonicotinoid chemicals: clothianidin, thiamethoxam, and imidacloprid. Between 79 and 100 percent of corn seed in the U.S. is coated with neonicotinoids, and popcorn is no exception.

Seed coatings are a common but relatively new method of applying pesticides to crops. The seed is covered with the pesticide or pesticide mixture (fungicide, herbicide, and insecticide combinations are common), allowing the chemicals to be taken up into the plant as it grows – ultimately rendering the whole plant toxic. Yet only 5% of the active chemical pesticide on the seed coating enters the plant, leaving the remaining 95% to enter the environment through seed dust or soil contamination and water runoff.

The widespread use of neonicotinoid seed coatings on popcorn is particularly alarming because of their documented harm to pollinator species, like bees, that are vital to our food supply and environment. To date, more than 4 million Americans have called on the government to take stronger actions to protect bees from toxic pesticides like neonicotinoids.

Pop Weaver is not alone in taking action to protect bees from neonicotinoids: In 2014, the U.S. Fish and Wildlife Service announced that their agency is banning neonicotinoid insecticides from being used on all wildlife refuges nationwide by January 2016. The European Union has a moratorium on the most toxic uses of neonicotinoids. The Province of Ontario, Canada plans to reduce the number of acres planted with neonicotinoid-coated corn and soybean seeds by 80 percent by 2017. 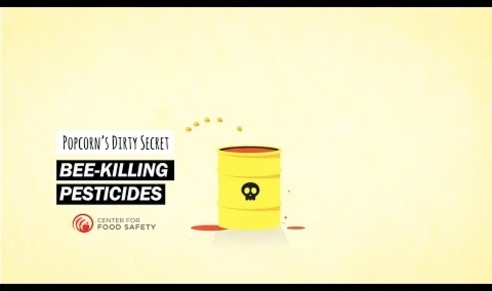