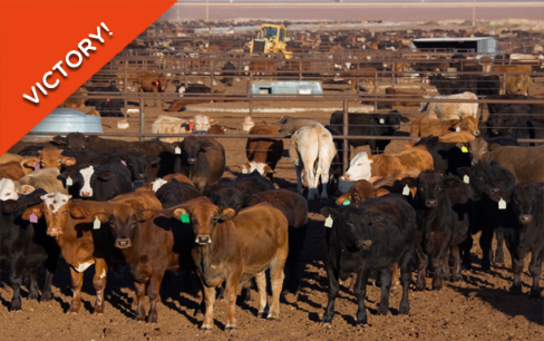 BOISE – Idaho’s Ag-Gag law is unconstitutional, the U.S. District Court for the District of Idaho ruled today, overturning the law. In a landmark victory for a broad-based public interest coalition of national nonprofits, including Center for Food Safety (CFS), the Animal Legal Defense Fund (ALDF), People for the Ethical Treatment of Animals (PETA), and the American Civil Liberties Union (ACLU) of Idaho, the court held that the Ag-Gag law, Idaho Code sec. 18-7042, violates the First and Fourteenth Amendments to the U.S. Constitution. Today’s decision marks the first time a court has declared an Ag-Gag statute unconstitutional.

“This is a huge victory for free speech, animal welfare, and food safety. Without the ability to witness and expose the illegal and unethical behavior that goes on in one of the nation’s most powerful industries, we are all vulnerable. This latest ruling affirms our right to report abuse in order to protect animals and our health,” said Paige Tomaselli, senior attorney for Center for Food Safety.

Judge B. Lynn Winmill was resounding in his ruling, writing, “Although the State may not agree with the message certain groups seek to convey about Idaho’s agricultural production facilities, such as releasing secretly recorded videos of animal abuse to the Internet and calling for boycotts, it cannot deny such groups equal protection of the laws in their exercise of their right to free speech.” He also affirmed that “Protecting the private interests of a powerful industry, which produces the public’s food supply, against public scrutiny is not a legitimate government interest.”

The statute criminalized undercover investigations that document animal welfare, worker safety, and food safety violations at an “agricultural production facility,” thus “gagging” speech that is critical of industrial agriculture, including speech that advances significant public interests in protecting Idahoans’ safety. Under this law, journalists, workers, activists, and members of the public could have been convicted for documenting animal cruelty or life-threatening safety violations. The court ruled that this statute violates the First Amendment by suppressing speech that criticizes factory farms and was motivated by unconstitutional animus against animal advocates—which is a violation of the Equal Protection clause of the Fourteenth Amendment.

Undercover video and photography has exposed numerous shocking practices that are considered “industry standards.” These pervasive, systematic procedures include routine mutilation such as debeaking birds with electrically-heated blades and castrating male animals by slicing open their scrotum and ripping their testicles out without pain relief or anesthesia. These animals are then kept in intensive confinement, unable to turn around for months on end. Exposés have also detailed the sickening farming conditions resulting in contaminated meat products that pose serious health risks to the public, as well as life threatening conditions for farm workers.

These investigations, and the subsequent media coverage, have led to food safety recalls, citations for environmental and labor violations, evidence of health code violations, plant closures, criminal convictions, and civil litigation. The Idaho statute unconstitutionally and unwisely prohibited efforts to bring violations of state and federal laws relating to food safety, environmental protection, and animal handling to the attention of the public and law enforcement.

A copy of the court’s decision is available upon request.