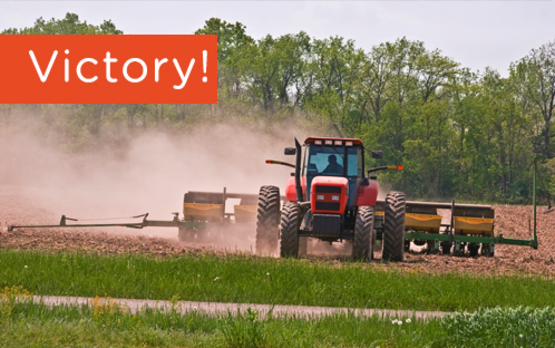 Medford, OR - Family farmers and other supporters of Jackson County’s precedent-setting ban on genetically engineered (GE) crop cultivation are celebrating a federal court ruling upholding the legality of Jackson County’s ordinance.  The ban passed last year with the backing of over 150 family farms threatened by contamination from GE crops, also known as GMOs, and bipartisan support from 66% of county voters.  The win came despite almost $1 million in opposition spending by Monsanto, DuPont, Syngenta and other chemical corporations heavily invested in GE crops. The ruling released this afternoon by Federal District Court Magistrate Judge Mark Clarke was a resounding victory for Our Family Farms Coalition (OFFC) and Center for Food Safety (CFS), which intervened in the case to defend the ban along with two local family farmers.  Lawyers with Center for Food Safety and the Earthrise Law Center based at Lewis and Clark Law School jointly represented the intervening parties.

Magistrate Judge Clarke rejected a legal challenge by two GE alfalfa growers, backed by Monsanto and other GE interests, claiming that the Jackson County GE crop ban violated Oregon’s Right to Farm Act.  The court, however, held that Jackson County’s ban was allowed under Oregon’s Right to Farm Act since it was intended to “protect against damage to commercial agriculture products, and therefore it falls into the exception to the Right to Farm Act.”  The Court also relied on the fact that Oregon’s Legislature clearly intended to exempt the Jackson County ban when it adopted a general pre-emption bill aimed at GE crops during the 2013 special legislative session.

“We are elated and could not have hoped for a better outcome,” explained Elise Higley, a Jackson County farmer and the Director of Our Family Farms Coalition.  “Family farmers should not have to live in fear that our farms will be contaminated by genetically engineered crops.  Monsanto can spend all the money they want fighting us at the ballot box and in the courts, but in the end we cannot let them and the other chemical corporations behind GMOs threaten the foundation of our farms and our food supply.”

George Kimbrell, Portland-based attorney with Center for Food Safety and counsel in the case, agreed. "Today's decision is a resounding affirmation of the right of farmers to protect themselves from GE contamination. This important decision protects the farmers of Jackson County, but also will stand as a precedent for the rights of farmers and communities across the United States to create GMO-free zones to protect the future of our food."

“We have always felt this was a strong case,” explained Tom Buchele from the Earthrise Law Center, attorney on the case, “but it was very encouraging to get such a strong and well-written opinion that affirms what we have argued since the beginning: communities have the ability under the Right to Farm Act to protect traditional agricultural crops from contamination from GMOs. It was really an honor to stand up and argue on behalf of Jackson County's traditional farmers at the hearing on May 20th.”

Jackson County farmer Chris Hardy, who first proposed and was the chief petitioner behind the Jackson County ban on GE crops, says the decision was a vindication.  “No farmer should ever have to tear up their crops like myself and others did for fear they had been contaminated by GMO pollen. Family farmers know well that GMO contamination could quickly destroy a family farm, but it was so encouraging to have a federal court support farmers’ right to defend ourselves against GMOs.”