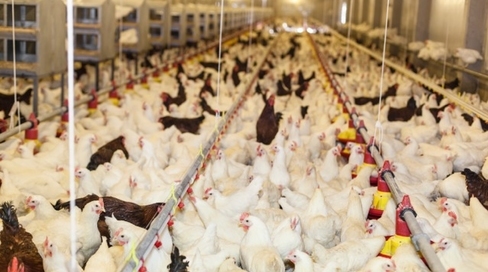 NEW YORK, NY — The ASPCA (American Society for the Prevention of Cruelty to Animals) and Center for Food Safety, have issued the following joint statement in response to recent announcements by chicken producers and retailers that they will reduce or eliminate the use of antibiotics in their flocks and supply chains:

“It is encouraging to see companies respond to consumer demand to reduce antibiotic use on chicken farms, a practice which breeds dangerous antibiotic-resistant bacteria. But eliminating the routine use of these drugs without addressing the birds’ underlying health problems due to poor living conditions and weakened genetics will only result in worse animal welfare and potentially, reduced food safety.

“A direct line can be drawn between chicken welfare and infections that can become food borne, and these issues must be addressed holistically. Antibiotics have been administered continuously as a crutch to prop up sickly birds who suffer from a lack of space, high levels of stress and poor sanitation; the health of these birds can only be expected to get worse without those drugs if environmental changes are not made. Companies must simultaneously improve living conditions while reducing reliance on routine antibiotics in order to fulfill their responsibility to consumers and the animals in their care.

“The ASPCA and Center for Food Safety call on the chicken industry to adopt common sense welfare measures for all commercially raised chickens, especially in light of the impending reduction in antibiotic use. These measures should feature healthier genetics, more space, adequate rest time, indoor enrichment, and better sanitation.”

Members of the chicken industry have also acknowledged the need for better husbandry in the face of reduced antibiotics, and the challenge that limiting antibiotics presents for ensuring the health and welfare of animals in current conditions: bacterial infections can increase, driving mortality rates even higher. [1] A veterinarian with Colorado Quality Research recently stated, “It’s a fact that… [antibiotic-free] birds have a higher incidence of pathogens such as Salmonella and Campylobacter… and a higher 7-day mortality. We’re actually producing a product that’s not as safe for people or as good for birds. It’s in direct conflict with the oath we’ve taken as veterinarians.”  - Steve Davis, DVM.

The ASPCA and CFS believe that a responsible reduction in antibiotic use must include an accompanying and meaningful improvement in living conditions, including increased space, sanitation and rest time, and better genetics.

The ASPCA’s Truth About Chicken campaign aims to improve the welfare of chickens raised for food in this country and offers consumers a way to take action and demand better.

About the ASPCA®
Founded in 1866, the ASPCA® (The American Society for the Prevention of Cruelty to Animals®) is the first animal welfare organization in North America and serves as the nation’s leading voice for animals. More than two million supporters strong, the ASPCA’s mission is to provide effective means for the prevention of cruelty to animals throughout the United States. As a 501(c)(3) not-for-profit corporation, the ASPCA is a national leader in the areas of anti-cruelty, community outreach and animal health services. For more information, please visit www.ASPCA.org, and be sure to follow the ASPCA on Facebook, Twitter, and Instagram.

About CFS
Center for Food Safety is a national, nonprofit, membership organization founded in 1997 to protect human health and the environment by curbing the use of harmful food production technologies and by promoting organic and other forms of sustainable agriculture. CFS maintains offices in Washington, D.C., San Francisco, California, Portland, Oregon, and Honolulu, Hawaii and has more than 650,000 members across the country. www.centerforfoodsafety.org