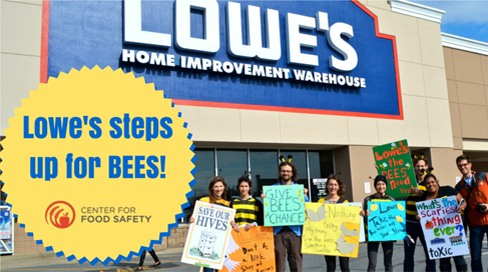 April 9, 2015 (Washington, DC)—After nearly two years of pressure from the public, Lowe’s Home Improvement has announced it will begin taking steps to protect bees and similarly affected pollinators from toxic insecticides call neonicotinoids. Its public commitment to phase out neonicotinoid pesticides is the most significant public commitment so far for a retailer of its size.

Lowe’s is committed to regularly reviewing the products and information we offer customers and we’re taking the following actions to support pollinator health:

“While there is still a lot of work left to do to reduce bees’ exposure to these harmful chemicals, this is a major step. The public has been calling for stronger protections for bees and other pollinators, and Lowe’s has finally listened to its customers to do just that,” said Larissa Walker, pollinator campaign director at Center for Food Safety.

The public campaign was spearheaded by Friends of the Earth U.S., and was supported by Center for Food Safety and numerous other organizations. Together, members of the public sent thousands of emails, prodded Lowe’s on social media, and rallied in front of Lowe’s stores across the country to urge the company to protect pollinators.