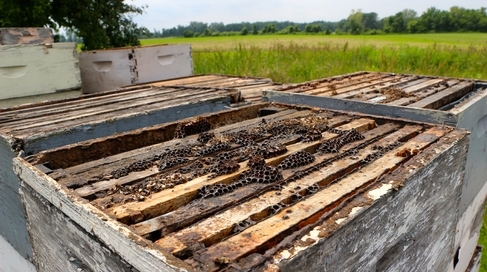 March 16, 2015 (Sacramento, CA)— In advance of Wednesday’s celebration of National Agriculture Day (Ag Day), beekeepers, environmental and food safety advocates praised the legislature for introducing a bill that would prohibit the use of bee-harming pesticides on public lands.

“Bees face growing problems from almost inescapable pesticide use,” said Todd Bebb, founder of the Santa Barbara Beekeepers Association. “Creating safe havens on public lands and protecting bees is not only essential to the livelihood of beekeepers, but also to the success of our state’s agricultural and ecological systems.”

AB 1259, introduced by Assemblymember Marc Levine, would prohibit the use of neonicotinoid pesticides on state-owned or state-managed lands, including spray applications of the pesticide, pre-applications to young plants, and the planting of seeds coated with the chemical. Neonicotinoids, as well as their cousin “systemic” pesticides, are linked to bee kills and poor pollinator health, as well as effects on bee navigation, reproduction and communication.

“Lacking federal leadership, beekeepers support California legislators who are taking important steps to protect pollinators from pesticides linked to their decline; now is the time to act,” said Paul Towers, Organizing & Media Director for Pesticide Action Network. “California can continue to lead the way to protect bees and other pollinators from hazardous pesticides, starting with public lands.”

Bees are responsible for pollinating many of the state’s crops, everything from increasing yields in strawberries, to essential pollination of the multi-billion dollar almond industry.

“Bees and other pollinators are critical to the continued success and prosperity of our food system. In fact, one out of every three bites of food we eat is from a crop pollinated by bees,” said Rebecca Spector, West Coast Director for Center for Food Safety.

On Ag Day, in both Washington, DC and Sacramento, CA, food and farming organizations celebrate efforts to build a healthy, resilient food system, including supporting pollinators. Bees and the beekeepers behind them are often unsung heroes that continue to pollinate food crops and support critical ecosystem services.

Beekeepers, farmers and environmental advocates alike have looked to the federal government to take greater leadership to protect bees. The California bill comes in advance of much-delayed recommendations to be issued by the White House Pollinator Health Task Force, expected later this month. The task force has faced tremendous pressure from pesticide corporations, their front groups and allies.

The task force, announced by the White House this past June, is charged with improving pollinator health through new agency regulations and partnerships. Two weeks ago, Representatives Earl Blumenauer (D-OR) and John Conyers’s (D-IL) reintroduced the Saving America’s Pollinators Act, which would suspend the use of four of the most toxic neonicotinoids until the Environmental Protection Agency (EPA) conducts a full review of their safety.

Neonicotinoids are a class of pesticides known to have acute and chronic effects on honey bees and other pollinator species and are considered a major factor in declining pollinator heath and populations. A growing body of independent science links neonicotinoids and other systemic insecticides to bee declines, both alone and in combination with other factors like disease and malnutrition. Twenty-nine independent scientists conducted a global review of 1,121 independent studies and found overwhelming evidence of pesticides linked to bee declines. Neonicotinoids are also slow to break down, causing them to build up in the environment  and endangering a whole range of beneficial species that inhabit these ecosystems.