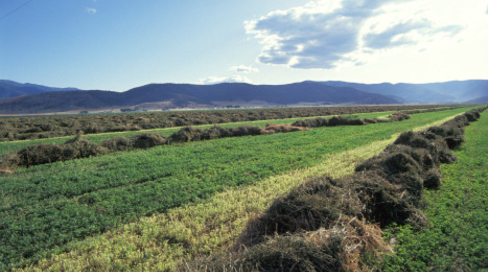 February 6, 2015 (Portland, OR) – Federal Court Magistrate Mark Clarke today issued an 8-page Order granting the motion by Center for Food Safety (CFS), Our Family Farms Coalition (OFFC), Oshala Farm and Chris Hardy  to intervene as defendants in a pending lawsuit challenging Jackson County's Ordinance 635, which was approved by voters as Measure 15-119. The ordinance, passed in May 2014, creates a genetically engineered crop free zone to protect local farmers from transgenic contamination.

The decision means that CFS, OFFC, as well as Jackson County farmers Oshala Farm and Chris Hardy will be able to help Jackson County’s lawyers "vigorously defend the legality of protecting family farmers from genetically engineered crops in Jackson County." The Court found that “[CFS, OFFC, Oshala Farm and Chris Hardy] have alleged concrete agricultural and economic interests that will be just as impacted by this litigation as the interests claimed by the Plaintiffs in this case.” When defending those “concrete agricultural and economic interests” the coalition will be jointly represented by legal counsel from Center for Food Safety and Earthrise Law Center at Lewis and Clark Law School.

“Farmers in Jackson County growing traditional crops are being threatened by crops genetically engineered to survive heavy pesticides. Monsanto and the chemical giants have created a product they can't control. After the people expressed their will through the democratic process, they turned to the courts to protect their profits. They intimidate and bully with high-priced law firms, but we won't back down,” said Jackson County farmer and director of Our Family Farms Coalition, Elise Higley.

In May 2014, voters in Jackson County overwhelmingly approved measure 15-119 by a 66 percent to 34 percent margin. The bi-partisan victory came despite a wave of opposition funding from the chemical industry, topping out at nearly $1 million. These same biotechnology interests challenged the Ordinance in court.

“This is big win for family farmers. The court has correctly recognized local farmers' right to protect the ordinance, farmers that championed the ordinance and are directly threatened by the lawsuit. We're proud to stand with them and represent them,” said George Kimbrell, CFS’s senior attorney, based in Portland.

Tom Buchele, with the Earthrise Law Center, said, "This is a good start to the case, but its not really surprising given the compelling agricultural and economic interests that farmers growing traditional crops have in seeing the ban on genetically engineered crops upheld and legally enforced."

Transgenic contamination, the transfer of genetically engineered crops to conventional, organic or wild plants, can happen through cross-pollination, seed mixing or other means throughout agricultural production. When it does happen, traditional farmers lose GE-sensitive domestic and export markets and customers, and contamination episodes in corn, wheat, rice, alfalfa, sugar beets, and other crops have cost U.S. farmers billions of dollars over the past decade. A state-sanctioned Citizens’ Initiative Review (CIR) of the ban, conducted prior to the election, concluded that farms in Jackson County are at “serious” risk of contamination by GE crops. The review also concluded that the initiative would not incur significant enforcement costs.