Maui County Fails to Defend the Will of its Citizens; Caves to Pesticide Industry 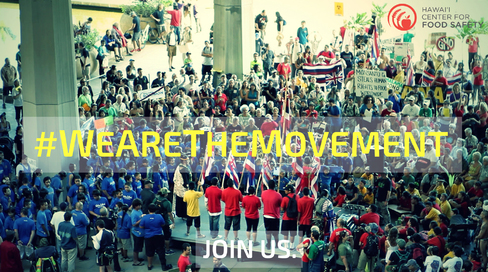 Coalition calls for public demonstration on February 6 at 8am at the County Council Building to demand enforcement and defense of their YES Vote.

January 30, 2015 (Maui, HI)-- Center for Food Safety, Maui United, Babes Against Biotech, SHAKA Movement, Ocean Defender and the Coalition for a Safer Healthier Maui today expressed outrage over the decision by Maui County to disregard its duty to defend a law passed by its citizens. In November, Maui residents passed a ballot initiative prohibiting the growth, testing or cultivation of GE crops in Maui County until an environmental and public health study can show that the planting operations are safe for the community. Just nine days after the Maui initiative passed, Monsanto, along with Dow-owned Agrigenetics and several industry-friendly groups, sued Maui County, seeking to have the moratorium thrown out. While it was expected that the County would rise to defend the law, today, attorneys for Maui County filed a single sentence brief with the court, stating that it “is taking no position.”

“The people of Maui passed this law through the proper ballot initiative power; the county attorneys, as public servants, have a duty to defend it,” said George Kimbrell, attorney with Center for Food Safety. “This is highly unusual and reveals the power the pesticide industry has on the island.”

“The county has assured its citizens that it will protect profits over people and ignore our demand for home rule” said Ashley Lukens, Program Director of the Hawai‘i Center for Food Safety and head of the Coalition for a Safer, Healthier Maui.

“If we, the people, made a statement through a democratic process and those who are to work for us deny that process to go forward, it begs the question: who do they really work for?” said Alika Atay of SHAKA.

“The people of Maui have spoken through the most democratic and fundamental avenue we have: a vote.  The people want a moratorium on GMO crops and it is the County's job to defend our position,” echoed Autumn Ness of Maui United.

Presently, Hawai‘i is used as an outdoor laboratory for companies like Monsanto to test genetically engineered crops and their related pesticides. In 2014 alone there were 1,381 field test sites; California only hosted 178 sites. Most of these crops are engineered to resist herbicides and pesticides. Testing these crops means repeated spraying of dangerous chemicals near neighborhoods, schools, and waterways. The initiative, supported by the Coalition for a Safer, Healthier Maui would have suspended all GE operations in the county pending a safety impact review.