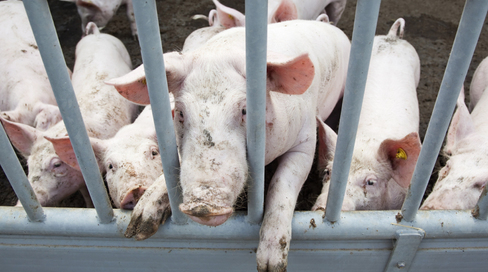 The Environmental Integrity Project and the Humane Society of the United States filed the lawsuits in federal court on behalf of rural residents and family farmers whose health and quality of life is affected by noxious air pollutants from factory farms.

“When the emissions are at their worst, we have had to leave our home for days at a time,” said Rosie Partridge, a family farmer whose home in Sac County, Iowa, is surrounded by more than 30,000 hogs within four miles. “The ammonia and hydrogen sulfide are so strong that my husband has trouble breathing.”

"In California’s San Joaquin Valley, we have suffered a huge increase in factory farm dairies over the past decade,” said Tom Frantz, a farmer and President of the Association of Irritated Residents (AIR).  “Ammonia emissions from factory farm dairies are causing the highest fine particulate matter levels in the United States, which seriously harms our health while EPA has done nothing."

The lawsuits seek to prompt EPA to take action on two rulemaking petitions. Those petitions, filed years previously, asked EPA to use its authority under the federal Clean Air Act to control emissions of air pollution from factory farms.

“Factory farms have managed to skirt regulation and accountability for far too long. With this lawsuit, we seek to defend the neighboring communities and local environment that have dealt with the consequences of these massive operations for decades. It’s time for EPA to fulfill its mandate," said Paige Tomaselli, senior attorney at Center for Food Safety.

“Factory farm air pollution harms public health, the environment and rural quality of life,” said Tarah Heinzen, attorney for the Environmental Integrity Project. “Yet EPA is looking the other way while citizen pleas for action collect dust on the agency’s shelf. EPA has acknowledged the harmful impacts of factory farm air pollution for over a decade, yet is still failing to act on the problem.”

Jonathan Lovvorn, chief counsel for animal protection litigation for The Humane Society of the United States, said: “Animal factories subject millions of animals and farm workers to highly toxic levels of air pollution on the farm, and also release huge amounts of these toxins into the environment. EPA’s failure to address these impacts should be alarming to anyone that cares about animal welfare, worker safety, human health, environmental protection or the preservation of rural communities.”

The two organizations filed petitions with EPA in 2009 and 2011 asking the agency to address factory farm pollution, but the agency failed to act. The legal basis for the lawsuits filed today is that EPA’s delays of nearly six and four years in responding to the petitions is unreasonable under federal law.

The petition from HSUS requests EPA to list factory farms as stationary sources of pollution under the Clean Air Act, and set performance standards for new and existing facilities. The Environmental Integrity Project’s petition asks EPA to set health-based standards for ammonia.

The lawsuits ask the court to order EPA to make a final decision on the 2011 and 2009 petitions within 90 days. The plaintiffs are the Environmental Integrity Project, the Humane Society of the United States, Center for Food Safety, Sierra Club, Friends of the Earth, Clean Wisconsin, Iowa Citizens for Community Improvement, and the Association of Irritated Residents represented by the Center on Race, Poverty & the Environment.

Dr. Keeve Nachman, an assistant professor at the Johns Hopkins Bloomberg School of Public Health’s Center for a Livable Future, said: “There is mounting evidence that air pollutants from large-scale animal operations can make nearby residents sick. It’s important that EPA use its authority to protect those most vulnerable to the effects of these exposures.”