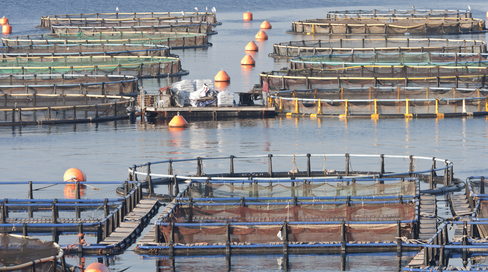 “It’s mind-boggling to think that USDA would seriously consider allowing fish farms at sea to be organic,” said Dr. Lisa J. Bunin, Center for Food Safety’s Organic Policy Director and the report’s co-author.  “It’s absolutely impossible to control or monitor the wide range of substances, including toxic pollutants, that flow into and out of sea-based farms.”

Twenty-four million fish escapes have been reported worldwide in just over two decades (see report), based upon data compiled by CFS from available public records.  Escaped farmed fish can carry pathogens and diseases, restructure food webs through the introduction of non-native species competing for resources, and could lead to extinction of wild fish of the same species in certain areas.  This disruption of marine ecosystems violates one of the basic tenets of organic, which is to promote ecological balance and conserve biodiversity.

Based upon the Report findings, CFS has determined that:

Open-ocean fish farms can never be organic. Inputs and outputs to the system cannot be monitored or controlled and neither can a farmed fish’s exposure to toxic synthetic chemicals, which are prohibited under Organic Foods Production Act (OFPA) and present in the marine environment.

Farming migratory fish can never be organic. This statement holds true regardless of the type of system in which they are reared. That is because their confinement in fish farms would curtail their biological need to swim far distances, creating undue stress. Some migratory species are also anadromous, such as salmon, migrating between freshwater and the ocean during various life stages, a behavior not possible while in containment. The organic standards dictate that organic production systems must not the natural behaviors of farmed animals.

Farmed fish fed wild fish, meal or oil can never be organic. That is because OFPA requires that all certified organic species are fed an organic diet. Feeding farmed fish wild-caught fish and related by-products—fish meal and fish oil—would increase pressure on already over-exploited and recovering fisheries that form the basis of the marine food web. It would also decrease the food supply of a wide range of native, aquatic species, including seabirds and sea mammals, contravening the USDA organic biological diversity conservation requirements.

“We believe that the strong findings contained in this Report warrant USDA’s withdrawal of plans to allow organic ocean-based fish farming,” Dr. Bunin said.  “To do less would be irresponsible organic policy-making, and it would do a disservice to the entire organic industry.”