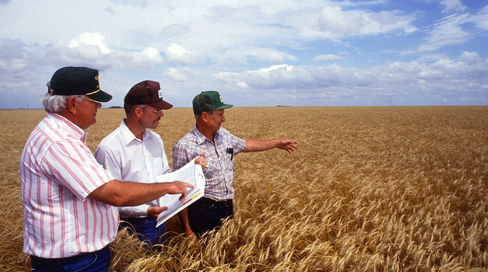 September 26, 2014 (Washington, DC)--The U.S. Department of Agriculture (USDA) today announced that experimental genetically engineered (GE) wheat was discovered in July, 2014 at a  Montana research facility that has not legally grown the variety since 2003.

“Once again, USDA and the biotech industry have put farmers and the food supply at risk,” said Andrew Kimbrell, executive director for Center for Food Safety. “Coexistence between GE and non-GE crops is a failed policy that fundamentally cannot work. Genetic contamination is a serious threat to farmers across the country.”

“Just as USDA closes one fruitless investigation, it tries to bury the story of yet another contamination. USDA cannot keep treating these as isolated incidents; contamination is the inevitable outcome of GE crop technology,” said Kimbrell. “It’s time for Congress to take definitive action.”

Monsanto is currently in the process of settling a class action lawsuit brought by wheat farmers impacted by the Oregon contamination episode, which forced exports to several Asian and European markets to be suspended and cost farmers millions of dollars. USDA records reveal that Monsanto has conducted 279 field tests of herbicide-resistant wheat on over 4,000 acres in 17 states since 1994. Monsanto has received at least 35 notices of noncompliance from 2010 through 2013, more than any other company.

“Farmers, not the biotech industry, are on the hook for these contamination episodes. There must be accountability for Monsanto,” said Kimbrell. “USDA should, at a minimum, immediately place a moratorium on open-air field testing of genetically engineered crops.”

After a decade of field trials, Monsanto dropped efforts to introduce Roundup Ready GE wheat in 2004 in the face of intense international opposition from consumers, farmers, wheat millers and food companies.  However, after a six-year hiatus, Monsanto once again began extensive field-testing of GE wheat in 2011.

Opponents of GE wheat have long argued that it would contaminate conventional wheat, making it unsellable to many markets that reject GE products. The U.S. is the world’s biggest exporter of wheat, an $8 billion business. A 2005 study estimated that the wheat industry could lose $94 to $272 million if GE wheat were introduced.  Past transgenic contamination episodes involving GE corn and GE rice have triggered over $1 billion in losses and economic hardship to farmers.

In late 2005, the USDA’s own Inspector General issued a scathing report detailing numerous violations of agency rules in regulating genetically engineered crop field trials. USDA officials did not know the locations of many field trials it was charged with regulating, and did not conduct required inspections of others.  In 2002, the National Academy of Sciences also criticized serious deficiencies in USDA’s regulation of genetically engineered crops.

In 2013, Center for Food Safety joined over 150 organizations and businesses in a letter to USDA Secretary Vilsack calling on the agency to protect the wheat industry by implementing necessary protections from GE contamination.