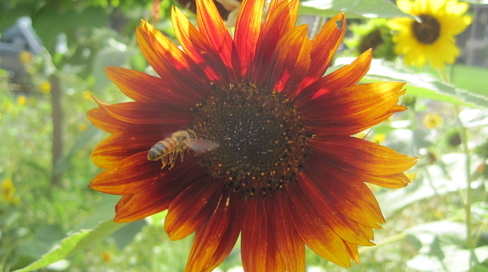 Less than a week after the White House announced a new task force to better protect our pollinating species, Center for Food Safety is pleased to announce that Home Depot and BJ’s Wholesale Club are taking steps to better protect pollinators like bees. After hundreds of thousands of concerned citizens contacted Home Depot, the company announced plans to label plants pretreated with neonicotinoid pesticides and begin to offer customers alternative products. Neonicotinoids are a class of systemic pesticides that have been shown to harm bees.

“Thanks to the tremendous support of people across the country, we are finally starting to see real action to protect important pollinators like bees,” said Larissa Walker, who heads Center for Food Safety’s pollinator campaign. “We would like to see Home Depot remove these products from their shelves entirely, but this is a step in the right direction. By labeling these products, consumers have a choice.”

Many seeds and plants sold at home improvement stores, including those marketed as “bee friendly,” are pretreated with neonictinoid pesticides. Bees that are exposed to neonicotinoids even at low doses can become disoriented and have their immune system compromised; bees that come into contact with higher doses, such as when a flowering tree or plant is sprayed with the chemical, can be killed outright.

Home Depot announced it will require all of their suppliers to label plants that they have treated with neonicotinoid insecticides by the fourth quarter 2014. The company vowed to work with suppliers to find alternatives.

BJ’s Wholesale Club is working to phase out the use of neonicotinoids in its products, requiring vendors to remove neonicotinoids from plants by the end of 2014 and/or require warning labels for plants still treated with the insecticide.

Center for Food Safety commends Home Depot and BJ’s for taking important first steps and hopes other retailers such as Lowe’s and WalMart will follow suit.

This effort has been spearheaded by Friends of the Earth US, in partnership with Center for Food Safety, Pesticide Action Network, Beyond Pesticides and other groups across the country.