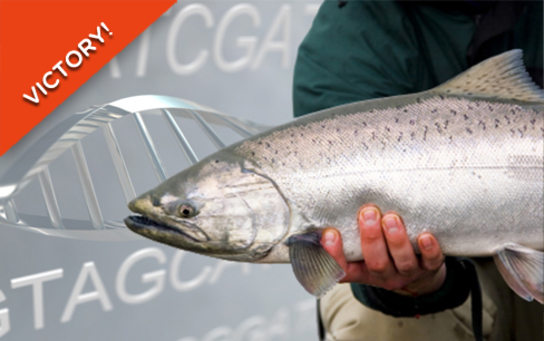 The two largest grocery stores in the United States, Kroger (NYSE: KR) and Safeway (NYSE: SWY), have made commitments to not sell GMO salmon, according to statements released today by Friends of the Earth and a coalition of more than 30 consumer, health, food safety and fishing groups, including Center for Food Safety, Food and Water Watch and Consumers Union. These stores join other leading supermarket chains -- now totaling over 9,000 stores nationwide -- that have already rejected the GMO salmon that is still under review by FDA.

Kroger, the leading conventional grocery chain in the U.S. with 2,424 stores, informed Friends of the Earth of its decision in a December email from Keith Dailey, director of media relations at Kroger. “Should genetically engineered salmon be approved, Kroger has no intention of sourcing it,” Dailey wrote.   Safeway, the number two conventional grocer with 1,406 stores, confirmed their position in an email to Friends of the Earth last week and said they plan to post their statement online March 5.: "Should GE salmon come to market, we are not considering nor do we have any plans to carry GE salmon. The seafood products we offer will continue to be selected consistent with our Responsible Seafood Purchasing Policy, Responsible Sourcing Commitment and our partnership with FishWise."

“By making commitments to not sell genetically engineered salmon, Kroger and Safeway have joined the large number of grocery chains, from Trader Joe’s to Target, that have wisely chosen to listen to the majority of consumers who do not want to eat genetically engineered fish,” said Dana Perls, Food and technology policy campaigner with Friends of the Earth. “Now Costco, Walmart, Albertsons and other retailers need to catch up and provide their customers with what they want: natural, sustainable seafood that isn’t genetically engineered in a lab.”

“Genetically engineered salmon are bad for the consumer, bad for the environment, and bad for our native salmon. We call on all fish retailers to reject this dangerous product that consumers don’t want,” said Andrew Kimbrell, executive director of Center for Food Safety.

"This is good news, as FDA's human and environmental assessments of the safety of this genetically engineered fish are both seriously flawed,” said Michael Hansen, PhD, senior scientist at Consumers Union, the public policy arm of Consumer Reports.

"Today's announcement by major grocery retailers makes it even more clear that there is no demand for GE salmon," said Wenonah Hauter, executive director of Food & Water Watch. "It's time for the FDA to deny the application for this unsustainable and unnecessary new genetically engineered food."

Three quarters of Americans surveyed in a New York Times poll said they would not eat genetically engineered fish, and 93 percent wanted GMO foods to be labeled. Polls show that 80 percent of Americans who regularly eat fish say sustainable practices are "important" or "very important" to them. The supermarket rejection of genetically engineered salmon is part of a growing trend of food companies distancing themselves from GMO foods. Chipotle (NYSE: CMG) is removing and labeling GMOs and Whole Foods (NASDAQ: WFM) will require GMO foods in its stores to be labeled by 2018. Cereal giant General Mills (NYSE: GIS) recently removed GMO ingredients from Cheerios and Post (NYSE: POST) quickly followed suit, removing GMOs from Grape Nuts. McDonald's (NYSE: MCD) and Gerber (OTN: NSRGY) have said they have no plans to buy the GMO apple that is pending approval by USDA.

For a full list of companies contacted and where they stand, see Center for Food Safety's Guide to Avoiding GE Fish.