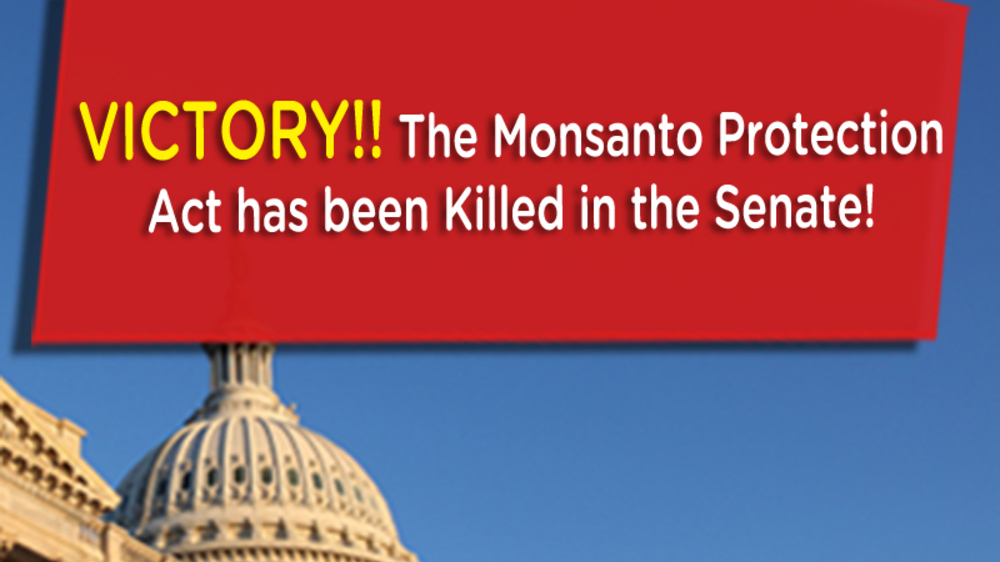 Center for Food Safety applauds Senator Mikulski and Senate Leadership for removing the “Monsanto Protection Act” through an amendment filed to the Senate Continuing Resolution (CR).  The House-passed bill would have extended the dangerous policy rider for another three months, outraging public interest and family farm groups. Center for Food Safety (CFS) has led the fight against the corporate earmark since it was first introduced in the summer of 2012, working with both lawmakers and the public to understand the rider’s consequences. Over the last year, CFS members have sent hundreds of thousands of emails and calls to Congress demanding the removal of “Monsanto Protection Act”.

“The American people asked Congress to stand up against corporate interests and Senator Mikulski along with Senate leadership answered the call. We applaud their resolve during this contentious time on Capitol Hill, putting good policy over backdoor politics,” said Colin O’Neil, director of government affairs for Center for Food Safety.

The "Monsanto Protection Act" represents a serious assault on the fundamental safeguards of our judicial system and would negatively impact farmers, the environment and public health across America.  The legislation would strip federal courts of their authority to halt the sale and planting of an illegal, potentially hazardous GE crop and compel USDA to allow continued planting of that same crop upon request. The section, originally proposed by House Republicans in 2012, was added in secret to a government funding bill earlier this spring.

“The ‘Monsanto Protection Act’ was bad policy and had no place in a short term spending bill. Removing it from the bill preserves the strength of our judicial review system and is a major win for the food movement. Center for Food Safety looks forward to working with Senator Mikulski and other legislators on strengthening the health and safety of our food system,” added O’Neil.

“One week ago, I asked, ‘Who pulls more weight on Capitol Hill? The agrichemical companies like Dow and Monsanto, or the food movement? Thanks to the leadership of Senator Barbara Mikulski we now know the answer: the food movement,” added Elizabeth Kucinich, policy director at Center for Food Safety.